The Iranian leadership may be nucking futs, but they understand US campaign year politics just fine, thank you.

The United States will respond if Iran tries to close the strategic Strait of Hormuz at the entrance to the Gulf, US Defense Secretary Leon Panetta warned Sunday, saying such a move would cross a “red line.”


“We made very clear that the United States will not tolerate the blocking of the Straits of Hormuz,” Panetta told CBS television. “That’s another red line for us and that we will respond to them.”

Panetta was seconded by General Martin Dempsey, the chairman of the Joint Chiefs of Staff, who said Iran has the means to close the waterway, through which 20 percent of the world’s oil passes.

“But we would take action and reopen the Straits,” the general said on the same show, “Face the Nation.”

Meanwhile, gas prices here have gone from $2.99 a gallon to $3.49 a gallon in the space of 3 weeks just from Iran going "Oh yeah?  I got your embargo right here."  Any actual shots get traded in Hormuz, and that 3 becomes a 4 overnight.  And Iran gets richer, the US oil giants get richer, and the American people get screwed.

Tell me how this is a bad plan from Iran's point of view again if they wanted to hurt our economy?
Posted by Zandar Permalink 9:56:00 PM No comments:

The Attempted Assassination Of Gabby Giffords, A Year Later

It's important to remember as we look back on this seminal moment in our politics that several people were killed, innocent bystanders who had committed the sin of being at an district event with the Congresswoman.

U.S. Congresswoman Gabrielle Giffords, wounded in a deadly mass shooting on January 8 last year, visited a Tucson area park on Saturday as survivors and residents prepared for the somber anniversary on Sunday.


A gunman toting a semiautomatic pistol pumped bullet after bullet into a crowd gathered for a congressional outreach event outside a Tucson supermarket a year ago.

Six people were killed and 13 wounded, including Giffords, who was shot through the head and has been recovering at a hospital in Houston, Texas.

With her husband retired astronaut Mark Kelly at her side, Giffords walked a desert trail outside Tucson named for her slain aide Gabe Zimmerman, her office said, stopping briefly to talk to hikers.

Her appearance, during only her fourth visit to the city since the shooting, came as survivors and residents of this close-knit city came together for walks, story-telling sessions and outdoor festivals ahead of the anniversary of the shooting on Sunday.

And we shouldn't forget that the new "austerity politics" where government cannot, should not, and will not assist the American people under the next GOP administration, an administration that will cut services even more, comes at a price.  Sometimes that price is bloody.
Posted by Zandar Permalink 7:40:00 PM No comments:

Two debates in about 12 hours there, one from last night, one from this morning.  Both were horrible affairs that just proved how none of these dipsticks would last 15 minutes in a debate with President Obama.  (In Perry's case, 15 seconds.)

The bottom line, and what really struck me about the debates, was both Jon Huntsman and Mitt Romney running as Tea Party Republicans, or trying to.  Romney this morning confirmed how he would as President end most federal entitlements and "return them to the states".  Huntsman put forward the Ryan plan as well and said yes, that Medicare and SS had to go.  Romney flat out said that as President, I should not expect SS or Medicare to pay for much of anything by the time I'm approaching 70 while current retirees, the boomers, will be fine.

Ron Paul of course beat them all with "Entitlements are not rights."

These guys are awful.  All of them.  Keep that in mind, especially Romney.  There are no moderate Republicans anymore.  They are all wingnuts.

The Bobblespeak translation of the debate is far more awesome than the real thing was, trust me.
Posted by Zandar Permalink 5:00:00 PM No comments:

So it seems you can get a little racism free with every pizza.  Papa John's customer Minhee Cho has a receipt from the store.  In place of name or description it says "lady chinky eyes" to describe her.  The manager didn't seem all that upset, indicating she had an idea of who it was and there would be disciplinary action.  Papa John's corporate has yet to issue a comment on any public account. 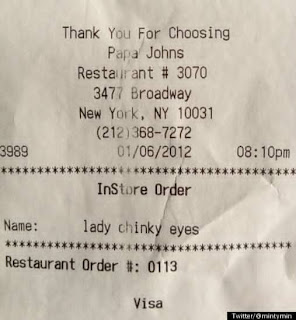 Reality Check: Teenagers Around The World

We recently covered high school kids who are eating chips from home rather than submit to the indignity of a balanced meal with vegetables and exposure to different ethnic foods.  A running gag was on Twitter from the first round of Christmas morning whiners, teens who were devastated that they didn't get an iPad or iPhone.  Now I'm going to tell you about another teen, whose story is amazing... and yet not at all unusual for a girl her age in Afghanistan.

Sahar Gul is fifteen years old.  According to sources, she is "not doing well" in the hospital.  She has been tortured.  Cut.  Burned.  Locked in a basement and starved.  Her nails were pulled out.  She is so damaged she cannot say a word.  Her face is unrecognizable because of the extensive bruising.  They cut off her hair.  Did I mention the pulled her fingernails out?  She has been hurting for so long that she recoils from human touch, even in her sleep.  She pulls her hand away in fear of the agony that is to come.  She is reduced to diapers because she couldn't make it to the bathroom on her own.

What did she do to deserve this treatment?  She was married off at fifteen, to a 30-year-old man.  He left her with his family, and this was what she got for refusing to engage in prostitution.  That was all.  She was beaten, scarred and emotionally destroyed because she refused to sell her body.  The Women's Network has stepped in and helped her get a lawyer and donations are being collected to go towards her care.  She'll live, but right now for her that's about as good as it is going to get.

Things are different here.  Mostly.  All the same, I think I'm going to say a little prayer of thanks the little girls in my world live where they can't be married off and thought of as nothing more than property.  I'll also say one for all the girls like Sahar Gul, who suffer and nobody knows their name.
Posted by Unknown Permalink 12:06:00 PM No comments:

I don't always agree with Rachel Maddow's assessment of President Obama's policies, but she is very much correct about her take on the President's post-Iraq plans for the Pentagon.

She reminds us that candidate Bush in 2000 ran against the Clinton administration's expensive and arrogant "nation-building", got elected, and less than one year after taking office had us embroiled in a war that lasted the rest of his administration (and then added another war on top of it a year and change later.)  As she points out, it took President Obama to end the war in Iraq, wind down Afghanistan, and oh yeah, get bin Laden.

The President's new Pentagon policy, she adds, is prima facie evidence that the 9/11 military era is coming to a close. Counter-insurgency is now ninth on the list of Pentagon priorities, and large-scale stability operations like Iraq and Afghanistan aren't on the list at all.

In other words, the President is saying "I will not invade Iran.  You guys can GTFO."  It will be called appeasement when Iran comes up in this month's GOP Clown Car Debates (except for Ron Paul, who will complain that the President's Iran policy is economic suicide) but the reality is we're ending this long national nightmare, and none too soon.
Posted by Zandar Permalink 10:30:00 AM No comments:

Conservative commentator Pat Buchanan has been suspended indefinitely from MSNBC, according to a statement from that network’s President Phil Griffin. An Associated Press article on CBSNews.com blames reaction to Buchanan’s latest book Suicide of a Superpower for his ouster from the cable network, as well as a campaign by the advocacy group, Color of Change.

The former Nixon aide has long courted controversy. In April of this year he said that President Obama’s path to the White House was the result of “Affirmative Action all the way.” In 2009, he asserted that the U.S. “has been a country built, basically, by white folks.”

MSNBC’s Griffin apparently believes, however, that Buchanan’s newest work has crossed a line. Suicide of a Superpower came out in October and features chapters with titles like “The End of White America” and “The Death of Christian America.”

The AP quotes Griffin as saying, “Because of the content of the book, I didn’t think it should be part of the national dialogue, much less part of the dialogue on MSNBC.”

Really?  Not that I would ever defend Buchanan, but he should have been severed from the network years ago.  He wrote the book in October and you dump him now?  What changed?  Maybe it was the calendar into 2012, an election year.  Maybe it was ratings.  What I'm secretly hoping is that Buchanan blew up at Melissa Harris-Perry getting her own show.