I know I've long sworn off Politifact's "fact checking" as a source for viable research, but I will note that Donald Trump told so many ridiculous whoppers on the campaign trail this year that the outfit couldn't pick just one as its infamous "Lie of the Year".

Remember, this is a group that once called Obama's "If you like your health care plan, you can keep it" the biggest lie in 2013 when somehow, former Bush press secretary Dee Dee Myers wrote a book on Benghazi claiming that Ambasaador Chris Stevens's body had been dragged through the streets and in 2011 ripped Democrats for daring to attack Paul Ryan's Medicare block grant scheme as the biggest political whopper of that year when in May 2011 Romney called Obamacare a government takeover of healthcare.

So take their determination of Trump with an entire salt mine.  No doubt in 2016, a Democrat will be found as liar of the year so Republicans ca tell whatever whoppers they want starting in January.
Posted by Zandar Permalink 9:51:00 PM No comments:

Email ThisBlogThis!Share to TwitterShare to FacebookShare to Pinterest
StupidiTags(tm): The Donald, Village Stupidity

Not to put too fine a point on it, but if you want to know why Republicans are so eager to sabotage Obamacare, there's a method to the madness.

Whatever Obamacare's shortcomings, a new paper shows one place where the law has been a clear success: narrowing the race gap in health insurance. So why aren't more Democrats shouting that from the rooftops?

In 2013, the year before most of the law's provisions for subsidized insurance took effect, non-elderly blacks were 47 percent more likely than whites to be uninsured. For American Indians, that figure was 93 percent; for Hispanics, 120 percent.


So yes, Obamacare is helping minorities.  If you want to know why Democrats aren't saying more about that, well, ask Kentucky Governor Jack Conway sometime.

The point of the paper, written by Algernon Austin at the Center for Global Policy Solutions, isn't just to celebrate those gains, but also to show how much room remains for improvement. One of the biggest obstacles to reducing the number of uninsured blacks is the refusal of many states with large black populations to accept federal money to expand their Medicaid programs. Some of those states may come around eventually, but don't hold your breath.

What's odd about the race gap isn't its persistence, but that its narrowing isn't more celebrated as one of the law's accomplishments. When asked why he thought the gap doesn't get more attention, Austin noted that Obama has spent less time than his predecessors talking about race. "It's been a stance of the administration to really emphasize that President Obama is the president for all Americans," Austin said.

Perhaps the administration worries that emphasizing the benefits of Obamacare for minorities might make whites think the law isn't so much about them, jeopardizing already tepid public support. In that sense, not harping on race might be good strategy: Maybe the country's fraught relationship with race means the only way to close the gap in health insurance is, in effect, by stealth.

Funny how that works.
Posted by Zandar Permalink 4:00:00 PM No comments:

So where do Donald Trump supporters live, and where does he have the strongest support?  He does well in rural and Christian conservative counties, for sure...but his strongest support comes from Republicans who live in counties with large black and/or Hispanic populations.

The celebrity businessman does particularly well in counties that the American Communities Project calls Minority Centers. Data from the last three polls show Mr. Trump has the support of 34% of Republican primary voters who live in those communities, the highest share seen in any of the seven county types that the communities project is studying for the 2016 campaign. 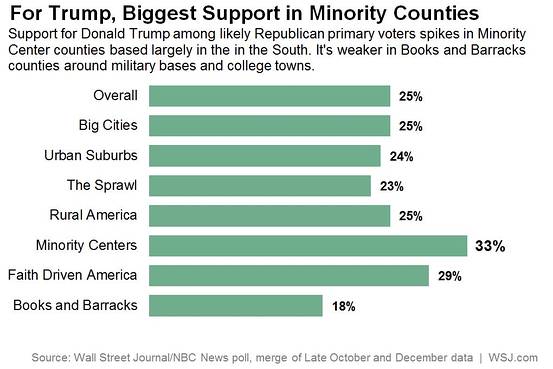 You can see a map of all the 2016 county types as designed by the communities project here. Note the green Minority Center counties running through North Carolina, South Carolina, Georgia, Alabama, Mississippi, Louisiana and Texas. Many of those states vote on March 1; South Carolina votes even earlier. March 5 brings Kentucky and Louisiana. On March 8 is Mississippi.

With polling scarce in most of the Southern states, Mr. Trump’s strength in the Minority Center counties is one of the few available signals of how he might perform in the region.

Moreover, the analysis suggests that Mr. Trump has pockets of strength that could prove valuable in states, some of them beyond the South, that award delegates to the top vote-winner in each congressional district. Districts with a large minority population may not include large numbers of Republicans, but they award delegates, nonetheless. Winning those districts could yield Mr. Trump a sizeable cache of delegates in states such as South Carolina and California.


Trump is doing the best among Republicans who live in counties in the South with a lot of non-white people?

I never would have imagined.
Posted by Zandar Permalink 10:00:00 AM No comments: