If there is going to be a fiscal cliff deal before January 1, it's quite possible that the late Sen. Daniel Inouye's seat will have to be filled in order to have someone on hand to help break a guaranteed GOP filibuster.

In his last wishes, Sen. Inouye expressed his desire to have current Rep. Colleen Hanabusa replace him by sending a personal deathbed letter to Gov. Neil Abercrombie, but that's apparently causing something of a stir in Sensible Centrist circles, who are apparently arguing that Abercrombie should fight back against Hawaii's old guard political machine and appoint somebody else.

Political analyst and University of Hawaii political science professor emeritus Neal Milner said Inouye knew exactly what he was doing when sent the letter to Abercrombie. It was meant to put the governor on the spot.

It had been assumed that Hanabusa would be Inouye’s successor when the senator eventually left office, and over the years it appeared the senator had taken a liking to the congresswoman, according to political experts. The two even had lunch just before he entered the hospital.

Milner said it’s also likely that when the senator looked around at his options that he saw a “thin bench” of replacement candidates.

“If you put yourself in his position and looked around to see who was qualified to take his position there’s not much to look at,” Milner said. “The pool gets narrowed very quickly if you look at it through the eyes of the senator. He’s not interested in pulling someone out of nowhere and giving him or her the seat. That just wouldn’t register with him.”

It's also political maneuvering, something Inouye knew a lot about.


Whoever Abercrombie does appoint will most likely serve out until the end of their days in the seat, given the state's politics.

Abercrombie is said by several close to him to prefer other candidates over Hanabusa. They include Blake Oshiro, his deputy chief of staff, Brian Schatz, his lieutenant governor — even Ed Case, with whom he served with in Congress. Case, 60, announced Sunday he was applying for the job.

Age may also be a consideration. Oshiro and Schatz are in their early 40s, meaning they could theoretically serve longer in the Senate and build up greater seniority. Hanabusa is 61 and Hirono is 65.

Harry Reid wants Abercrombie to make up his mind pretty quickly, regardless.  We'll see what happens.  This flap seems to be all about getting somebody other than Hanabusa in the office, and again a lot of that favors moderate Ed Case.  Frankly, I've got no problem with Hanabusa in the office, and I'd take Ed Case in Kentucky in a microsecond, but I think this is meddling with the Hawaii Democratic Party, plain and simple.

I think Abercrombie will go with Hanabusa.

Merry Christmas from Bon and an elk named Fred! 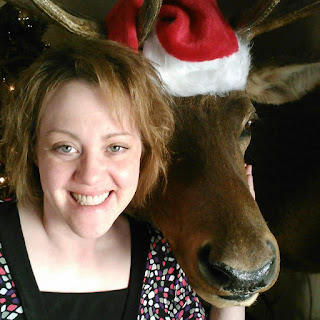 Insert Your Own Crapo Joke Here

Idaho GOP Sen. Mike Crapo had a bit of a rough weekend, being arrested for a DUI early Sunday morning in Virginia while, you know, being a supposedly devout and tee-totaling Mormon.

Sen. Michael Crapo (R-ID) apologized late Sunday in a written statement released by his office following his arrest on suspicion of drunken driving.

In an email to TPM, Crapo’s spokesman Lindsay Nothern said the senator was charged with a misdemeanor of drunken driving early Sunday after being pulled over in Alexandria, Va. for running a red light. Crapo was released from custody upon posting $1,000 bond, according to Nothern. The senator is scheduled to appear in court on Jan. 4.

"I am deeply sorry for the actions that resulted in this circumstance," Crapo said in the statement. "I made a mistake for which I apologize to my family, my Idaho constituents and any others who have put their trust in me. I accept total responsibility and will deal with whatever penalty comes my way in this matter. I will also undertake measures to ensure that this circumstance is never repeated."


Virginia is pretty tough on DUIs.  Crapo is facing a mandatory $250 fine and a year long license suspension, plus the installation of a dashboard breath test device on his car for that year.  Crapo was re-elected to a third term two years ago.  I don't expect any political fallout from this, but the people of Idaho may surprise me.

The Boston Globe gives their version of how the Romney campaign blew it:

To this day, Romney’s aides wonder how it all went so wrong.

They console each other with claims that the election was much closer than realized, saying that Romney would be president if roughly 370,000 people in swing states had voted differently. Romney himself blamed demographic shifts and Obama’s “gifts”: ­federal largesse targeted to Democratic constituencies.

But a reconstruction by the Globe of how the campaign unfolded shows that Romney’s problems went deeper than is widely understood. His campaign made a series of costly financial, strategic, and political mistakes that, in retrospect, all but assured the candidate’s defeat, given the revolutionary turnout tactics and tactical smarts of President Obama’s operation.

One of the gravest errors, many say, was the Romney team’s failure, until too late in the campaign, to sell voters on the candidate’s personal qualities and leadership gifts. The effect was to open the way for Obama to define Romney through an early blitz of negative advertising. Election Day polls showed that the vast majority of voters concluded that Romney did not really care about average people.

These failures are now the subject of scrutiny by national GOP ­officials who say they plan to “reverse engineer” the ­Romney effort to understand what went wrong. A number of Romney’s top aides stressed in interviews that, while they ­remain proud of their work, they feel an obligation to ­acknowledge their numerous mistakes so lessons are learned.


And yet we all know that if Team Romney had gotten those 370,000 votes and put the country into recount hell, or 500,000 votes and won the electoral college, we'd all be reading from our Village betters about how the Obama campaign was the largest failure in human history, and that despite these deeper problems in the Romney campaign, the Obama campaign must have been worse because after all, they still lost to the guy.  And the Romney campaign would have been "right all along".

So no, knowing how close the country came to abject disaster, knowing that Mitt Romney could have won the presidency and lost the popular vote by 3% and 4 million votes, I choose not to dance the dance of Loser Mitt, but to remember that despite every dirty trick in the book and a few new ones, it was only the Romney camp's massive incompetence that saved our country, and that 61 million Americans, less than 20% of the country, could have doomed us all.

They were close.  They needed but four states:  Florida, Ohio, Virginia and New Hampshire.  They almost got them.  We'd be wise to remember how close they were.

Merry Christmas.  We've still got a lot of work ahead.  Take the 2012 election as the warning it was.  Savor the victory, but stay vigilant.