Watch Luke Cage on Netflix.  It's by far the best of the Marvel Netflix series for a number of reasons, but most of all it's unapologetically black. 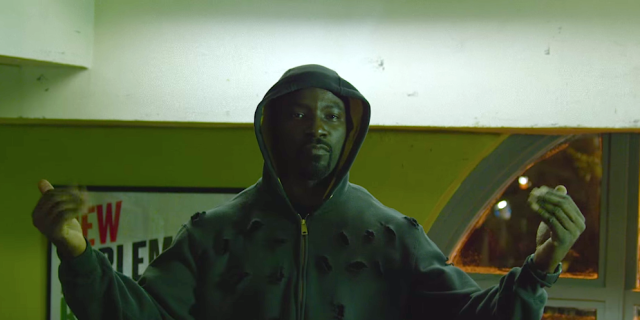 I know at this point in the proceedings that articles on the fascinating pathology of the "economically anxious middle-aged white Trump voter" are passé but this one by WaPo's Stephanie McCrummen stood out, as she talked to Melanie Austin of Pennsylvania and her boyfriend, Kevin Lisovich.

The first time she had seen him, at a rally in June, she was just beginning to realize how many people saw the world the way she did, that she was one among millions. At the time, her hips were still sore from a series of injections intended to calm her. She had gotten them in February, during a difficult time in her life, when she had been involuntarily hospitalized for several weeks after what she called a “rant,” a series of online postings that included one saying that Obama should be hanged and the White House fumigated and burned to the ground. On her discharge papers, in a box labeled “medical problem,” a doctor had typed “homicidal ideation.”

Melanie thought the whole thing was outrageous. She wasn’t a person with homicidal ideation. She was anxious, sure. Enraged, definitely. But certainly not homicidal, and certainly not in need of a hospital stay.

“It never crossed my mind that I’m losing it,” she said several months after her release, and a big reason for this conviction was the rise of Donald Trump, who had talked about so many of the things she had come to believe — from Obama being a founder of the terrorist group ISIS, to Hillary Clinton being a co-founder, to the idea that U.S. Supreme Court Justice Antonin Scalia may have been murdered in a White House plot involving a prostitute and a pillow.

“They say they found a pillow on his face, which is a pretty unusual place to find a pillow,” Trump had told the talk-radio host Michael Savage, who was using his show to explain the scenario to his 5 million weekly listeners, who then spread it on Facebook, where it wound up in Melanie’s feed.

To Melanie, this was the glory of the 2016 presidential election. The truth about so many things was finally being accepted, from the highest levels of the Republican Party on down to the grass roots of America, where so many people like her didn’t care what some fact-checker said, much less that one day Trump would suggest that Obama wasn’t born in America, and on another say maybe he was.

More and more, she was meeting people who felt the same as she did, joining what amounted to a parallel world of beliefs that the Trump campaign had not so much created as harnessed and swept into the presidential election. As Melanie saw it, what she had posted about Obama was no different from what a New Hampshire state legislator and Trump campaign adviser had said about Hillary Clinton, that she “should be put in the firing line and shot for treason.”

And so when she was released from the hospital with instructions to “maintain a healthy lifestyle,” she did what seemed to her not only healthy but also patriotic. She began campaigning for Trump.

“Trumpslide 2016!” she posted on Facebook a few days after she got home in March.

“Lets build a winning team and GREAT UNITED STATES OF AMERICA!! #Vote for #Donald #Trump for #President!” she posted in May. “#STOPHILARYCLINTON #STOPBERNIESANDERS #SHUTUPMITTROMNEY.”

In June, Melanie heard that Trump was holding a rally in an airplane hangar near Pittsburgh, so off she and Kevin went. On a blazing Saturday afternoon, her red “Make America Great Again” hat bobbed amid the thousands streaming past hawkers selling “Trump that Bitch” T-shirts and “Bomb the Shit Out of ISIS” buttons and a man handing out pamphlets about the apocalypse.


There are millions of people out there like Melanie Austin, and they are sure as hell going to vote.  They've guzzled the FOX News, Rush Limbaugh, Glenn Beck and Infowars Kool-Aid for the last 20 years and they see Trump as their ticket back to the glory days.

This is the heart of the modern GOP.  They're not going gently into that good night and they will continue to have outsized control over our politics for decades.  And if we're not careful they're going to win it all in 2016.
Posted by Zandar Permalink 4:00:00 PM No comments:

At one point Baldwin refers to moderator Lester Holt as “jazz man” and perfectly pronounced China the way Trump often does. He then quickly takes credit for already winning the debate, “If Hillary knew how, she would have done it already. Period. End of story. I won the debate. I stayed calm. Just like I promised. And it is over.”

Holt then told him he couldn’t leave because it was a 90-minute debate.

“My microphone is broken,” Baldwin as Trump said, looking panicked. “She broke it with Obama. She and Obama stole my microphone and took it to Kenya and they broke it and now it’s broken.”

He then starts sniffling and pretends like it’s someone else before ultimately blaming it on Clinton. “She’s been sniffling all night.”

“Secretary Clinton, what do you think about that,” Holt asks.

“I think I’m going to be president,” McKinnon said.


I think Hillary's going to be president too.
Posted by Zandar Permalink 12:00:00 PM No comments:

The fall term of the US Supreme Court gets underway Monday, and it will only have 8 justices because Republicans took the unprecedented step of denying President Obama's nominee, Merrick Garland, even the courtesy of a confirmation hearing.  Now the court will attempt to go about its business and will remain shorthanded until one of two things happen: Democrats retake the Senate, or Republicans win the White House.

For the first time in decades, there will be only eight justices, not nine, to begin the new term. Also absent are the kind of big-ticket cases — involving immigration reform, affirmative action, abortion, same-sex marriage and the Affordable Care Act — that in recent years have catapulted the Supreme Court to the fore of American civic life.

Instead, the short-handed court has assembled a docket of more-modest cases — albeit ones that touch on contemporary controversies such as the role of race in criminal justice and politics, free speech and perhaps the treatment of transgender students.

Of far greater consequence is the fate of the court’s ideological balance. And on that question, the court finds itself like the rest of the country: waiting to see what happens on Nov. 8.

It has been nearly a half-century since a presidential election promised such an immediate impact on the court. Senate Republicans have refused to take up President Obama’s choice of Judge Merrick Garland for the seat of the late Justice Antonin Scalia, arguing that a newly elected president should fill that vacancy.

As of Sunday, Garland has been waiting 200 days for the Senate to act on his nomination. Obama tapped Garland a month after Scalia’s death in February. But Senate Majority Leader Mitch McConnell (R-Ky.) has been adamant that the Senate will not even hold a hearing on Garland, the chief judge of the U.S. Court of Appeals for the District of Columbia Circuit.

The next president’s impact on the court could go well beyond that one choice and be felt for decades. Three of the current justices are now older than other members who recently retired from the court, suggesting more departures to fill.

A victory by Donald Trump would continue the modern tradition of courts dominated by Republican-appointed members. But Hillary Clinton’s success could upend the status quo at the Marble Palace, producing nominees who would cement abortion rights, affirmative action and gay rights, and challenge hard-won conservative victories on gun rights, strict voting laws and campaign finance.

Any discussion of the Supreme Court these days, Stanford law professor Pamela S. Karlan said at a recent preview session at William & Mary Law School, can be summed up in two words: “It depends.”


And so we move on.  But I will always remember that the Republican party reserved the unprecedented step of denying the first black President a hearing on a Supreme Court nominee...yet another indication that as awful as Donald Trump is, he is merely the symptom of a broken, racist, hateful party that controls Congress.
Posted by Zandar Permalink 8:00:00 AM No comments: