Last Call For The Daily Grinder

Shanna Tippen was another hourly worker at the bottom of the nation’s economy, looking forward to a 25 cent bump in the Arkansas minimum wage that would make it easier for her to buy diapers for her grandson.When I wrote about her in the Post last month, she said the minimum wage hike would bring her a bit of financial relief, but it wouldn’t lift her above the poverty line.

She called me the other day to say she didn’t get to enjoy the 25-cent hike for long. After the story came out, she says she was fired from her job for talking to the Post.

I spend a lot of time writing about people at the low end of the economy, and I see up close how narrowly they get by day-to-day. In this case, writing about Tippen’s plight may have made her situation worse.

Tippen says she was fired by her boss, hotel manager Herry Patel. Earlier that day, Patel had called the Post to express frustration that he had been quoted giving his opinion about the minimum wage hike. (He objected to it.)

It was soon after, Tippen says, that Patel found her in the lobby and fired her.

“He said I was stupid and dumb for talking to [the Post],” Tippen said. “He cussed me and asked me why you wrote the article. I said, ‘Because he’s a reporter; that’s what he does.’ He said, ‘it was wrong for me to talk to you.'”


So unless there’s an Arkansas law that forbids people from getting fired for talking to a Washington Post reporter, Ms. Tippen is basically screwed. It used to be that collective bargaining and unions would give a worker a fighting chance against situations like this.

Those days were effectively over before I left elementary school and St. Ronnie rid the Shining City on the Hill of air traffic controllers.

Oh well, her fault for being poor, right? If she was a worthy human being, she would have worked her way up to hotel franchise owner.
Posted by Zandar Permalink 9:55:00 PM No comments: Somebody Noticed!

There's something that bothers me about this story about gun shops teaching kids to shoot from the Chicago Tribune.


GAT Guns in East Dundee started offering these classes about a year ago because parents wanted to bring their kids in to shoot, manager Randy Potter said.

Another store — On Target Range and Tactical Training Center in Crystal Lake — offers a class to children ages 7 to 11 on firing .22-caliber rifles. At GAT, the children are trained on pistols.

“We couldn’t allow them to come in cold, not knowing what the parent and the child’s shooting ability was like,” Potter said. “Well, now what we do in the class is put them through and give them a card that fits in a wallet. They can show it at the counter, and the people at the counter will know that kid has been trained in safety and gun handling so it’s OK to let them shoot.”

The sound of gunfire is constant from the two shooting ranges inside the store, pistols upstairs, larger weapons downstairs. LED lights illuminate paper targets that glide back and forth at the command of the shooter and a touch-screen computer.

On the second floor, rifles line the walls and handguns fill display cases. To the side is a door leading to the classroom, which can hold a few dozen students. The first floor is taken up mostly by display racks of ammunition.

Before the children arrived, Wayne Inzerello sat in front of the room with a roster and a collection of bullets, ranging in size from bigger-than-your-thumb to smaller-than-a-fingernail.

In walked Sergio Meilman with his 12-year-old son and 11-year-old daughter, carrying a gun case, a box of ammunition and two sets of ear protection like airport workers wear.

Inzerello checked the kids in and made sure their names were spelled right, then asked them to take a seat up front. He repeated the routine as the room filled, trying to put the nervous ones at ease.

More than half of the four girls and 13 boys had fired guns before.


I grew up in western North Carolina, where rifles especially were tools that signified you were a responsible person.  The implicit understanding growing up in the foothills of the Smoky Mountains was that you learned to care for the rifle, clean it, load and unload it, and all the "boring" safety stuff before you ever were allowed to actually fire one, and that's what the NRA stood for. 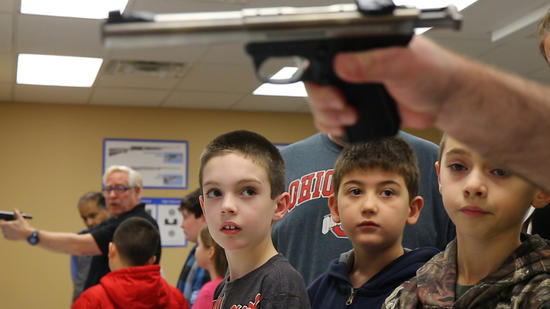 Here's my question.  Imagine all the kids and the instructors in the above picture were black and/or Latino.  Would you still feel the same way about kids in suburban Chicago having firearms class?

I'm thinking the answer is no.

That's what's bothering me about the fetishization of firearms.
Posted by Zandar Permalink 4:00:00 PM 3 comments: Somebody Noticed!

Via Juan Cole at Informed Comment, while the world has been paying attention to developments in Yemen with the Saudis settling in for a long airstrike campaign, developments in northwest Syria have taken a definite turn for the worse.


The provincial capital Idlib, a city of 165,000 in the old days and administrative center of the northwestern Idlib province, appears to have fallen completely to a Muslim fundamentalist coalition spearheaded by Ahrar al-Sham (Free Men of Syria) and the al-Qaeda affiliate, the Support Front (Jabhat al-Nusra). Most of the Idlib countryside has long been in rebel hands, and some of it was held by pro-Western, relatively secular-minded forces until last fall, when they were preyed upon and defeated by the Support Front, which is loyal to Ayman al-Zawahiri’s core al-Qaeda (responsible for the 9/11 attacks).


One fundamentalist Islamist coalition is bad enough, but if they are teaming up with AQ's Support Front, things are even worse than we imagined.  These guys know what they are doing, showing tactical and strategic discipline necessary to take and hold ground.

Aron Lund seems to argue that the fall of Idlib city is not terribly consequential. It was already nestled in the midst of rebel-held territory. The chief strategic danger to al-Assad’s forces is that the Sunni fundamentalists could use it as a launching pad to move against the Alawite Shiite populations around Latakia and to attack Latakia port to the west. The latter is important to resupply for the regime, which still controls the roads from the capital of Damascus up to Homs and over to Latakia. So far, however, the regime has managed to hold about two-thirds of the country population-wise, and these advances of rebels have sometimes been reversed, albeit with the help of Lebanon’s Shiite militia, Hizbullah. Al-Hayat also mentions the danger that the fall of Idlib could further isolate regime-held areas in the major northern city of Aleppo.


So this Terrible Twosome now have a base of operations to hit both Aleppo to the northeast, and the al-Assad regime's major resupply port to the southwest at Latakia. Again, this seems like a pretty solid strategic move on the part of the rebels, and that's bad news.

Some Syrian and Western supporters of the rebel forces are annoyed to have it pointed out that Free Men of Syria and the Support Front are extremist fundamentalists or that the latter, which is al-Qaeda, played a leading role in the past week’s Idlib campaign. But for those of us in the US who lived through 2001, it is unforgivable that the Support Front pledged fealty to the mass murderer of Americans Ayman al-Zawahiri. That is not to say that al-Assad’s forces are preferable. In my own view, it is a shame both cannot lose to some sane group. But the revolution and war have erased sanity from all sides, and the secular or even just non-Salafi rebel forces have been targeted and wiped out by al-Qaeda, Daesh and so forth. Those who support the rebel side should reach out to the Support Front and let them know that until they repudiate al-Qaeda and declare for democracy, they have no cheering sections in the West and they are de facto helping al-Assad by their stance.

Fun times, huh.
Posted by Zandar Permalink 10:00:00 AM No comments: Somebody Noticed!