Last Call For All The Money

To recap, 2013 marked the fifth straight year of record US corporate profits.

But corporate taxes are too high and crushing business, and our economy is stalled out.  Or it could be that the rich are screwing us over at a record pace.  Corporate profits in the US have tripled since 2000.  Median real wage growth since 2000 for workers?  Flat, if not fallen. 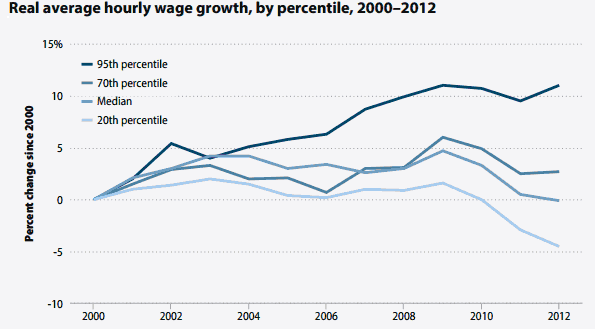 The American worker hasn't seen a dime from the these massive profits.  Now keep in mind that Republicans want to cut corporate taxes further to give corporations more profit.  They're not investing it in workers or wages or jobs, that's for damn sure.

So where's it going? So the money is not going to anyone you know.  Not to your paycheck.  Certainly not to your schools or roads or water mains.  The rich are getting richer.  The rest of us are getting nothing.

But let's keep voting for Republicans who want to eliminate corporate taxes while telling us a rising tide floats all boats.  It floats yachts.  It drowns those who can't afford the damn boat.

Burned Out And Hungry

The United Nations has issued its first major report on global climate change since 2007, and the 2014 version is far more dire and feeding the world will only get worse as nations like the US and China continue to ignore the situation.

A warmer world will push food prices higher, trigger "hotspots of hunger" among the world's poorest people, and put the crunch on Western delights like fine wine and robust coffee, the Intergovernmental Panel on Climate Change concluded in a 32-volume report issued Monday.

"We're facing the specter of reduced yields in some of the key crops that feed humanity," panel chairman Rajendra Pachauri said in press conference releasing the report.

Even though heat and carbon dioxide are often considered good for plants, the overall effect of various aspects of man-made warming is that it will reduce food production compared to a world without global warming, the report said.

The last time the panel reported on the effects of warming in 2007, it said it was too early to tell whether climate change would increase or decrease food production, and many skeptics talked of a greening world. But in the past several years the scientific literature has been overwhelming in showing that climate change hurts food production, said Chris Field of the Carnegie Institution of Science and lead author of the climate report.


We've wasted another seven years since the last report and effectively done nothing thanks to the GOP and corporate America.  There's no reason to believe anything will improve in the future when nearly half of a major American political party doesn't believe the problem even exists (or in evolution, or the fact some Republican senators think that the Earth is only 6,000 years old for that matter).

So no, it's not going to get better as long as the anti-science wing of the GOP continues to wield outsized power.
Posted by Zandar Permalink 4:00:00 PM No comments:

“Today, we have clearly entered a new phase in our implantation (in national politics)," she said. "Today the Front National is shaking up the traditional duo of the Socialists and (centre-Right) UMP.”

Sunday's runoff round of voting came after a week that saw French unemployment surge to a new record - making a reverse of first-round losses by the Socialists unlikely, and a cabinet reshuffle by Mr Hollande possible as soon as Monday.

Some 80 per cent of the French want him to dismiss Prime Minister Jean-Marc Ayrault, according to a Harris Interactive poll this week, and Manuel Valls, the ambitious and tough-talking interior minister, is their favourite to replace him. Laurent Fabius, the foreign minister, is also seen a contender.

Final turnout last Sunday was 63.5 per cent - a record low for local elections in a country with a strong attachment to its mayors, who wield considerable power.

Dissatisfaction with Mr Hollande's tenure and a string of legal intrigues involving opposition conservatives were expected to dampen turnout. Next presidential and parliamentary elections are scheduled for 2017.

Now where have I read that story before?