U.S. stocks closed mixed Friday, with the Dow and S&P 500 ending their best first quarter in over a decade, as investors weighed a report on consumer spending and a boost in the eurozone bailout fund. 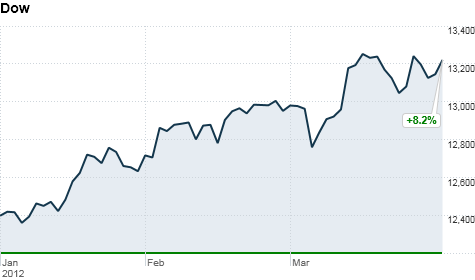 But American businesses are being crushed under Obama's regulatory tyranny and need to have Republicans like Bush take back over, so we can go from 13k to 6k again.  That'll be good for the economy and your 401(k), I'm sure.

It's all Obama's fault.
Posted by Zandar Permalink 10:04:00 PM No comments: Somebody Noticed!

Looks like Keith Olbermann has been fired from yet another network.  Again.  Jeez.  Current's brilliant idea?  Replace him with...Eliot Spitzer.

We’re very excited to announce that beginning tonight, former New York Governor Eliot Spitzer will host “Viewpoint with Eliot Spitzer,” at 8 pm ET/5 pm PT.  Eliot is a veteran public servant and an astute observer of the issues of the day. He has important opinions and insights and he relishes the kind of constructive discourse that our viewers will appreciate this election year.  We are confident that our viewers will be able to count on Governor Spitzer to deliver critical information on a daily basis.

All of these additions to Current's lineup are aimed at achieving one simple goal -- the goal that has always been central to Current's mission:  To tell stories no one else will tell, to speak truth to power, and to influence the conversation of democracy on behalf of those whose voice is too seldom heard.  We, and everyone at Current, want to thank our viewers for their continued steadfast support.

I'd like to apologize to my viewers and my staff for the failure of Current TV.

Editorially, Countdown had never been better.  But for more than a year I have been imploring Al Gore and Joel Hyatt to resolve our issues internally, while I've been not publicizing my complaints, and keeping the show alive for the sake of its loyal viewers and even more loyal staff.  Nevertheless, Mr. Gore and Mr. Hyatt, instead of abiding by their promises and obligations and investing in a quality news program, finally thought it was more economical to try to get out of my contract.

It goes almost without saying that the claims against me implied in Current's statement are untrue and will be proved so in the legal actions I will be filing against them presently.  To understand Mr. Hyatt's "values of respect, openness, collegiality and loyalty," I encourage you to read of a previous occasion Mr. Hyatt found himself in court for having unjustly fired an employee.  That employee's name was Clarence B. Cain.

In due course, the truth of the ethics of Mr. Gore and Mr. Hyatt will come out.  For now, it is important only to again acknowledge that joining them was a sincere and well-intentioned gesture on my part, but in retrospect a foolish one.  That lack of judgment is mine and mine alone, and I apologize again for it.


"I'm sorry that my employers were douchebags who suck rat poop" is an interesting tactic, but I think the much larger problem was that my cable company didn't care Current to begin with, so I don't really miss the guy.

But seriously, if you get tossed off Current for being too much of a fringer, it's time for an intervention.  I like Keith the newsman.  I don't like Keith's Ego, the newsman.  Really.  Yes, seeing a liberal voice go out like this is awful.  But KO is not entirely without fault, either.

Do These Guys Ever Get Tired Of Being Wrong All The Time?

It is typical for politically-engaged people to note the weaknesses and defects of their own side, while overestimating the strength and prowess of their opponents.  This is not a bad instinct, but sometimes it’s worth stepping back and trying to view the whole scene from a neutral perspective.  It is possible a neutral or objective observer would conclude that the Left has just had about the worst month in longer than I can recall.

So, cue the observers.


President Barack Obama holds a double-digit lead over GOP presidential candidates Mitt Romney and Rick Santorum in hypothetical general election matchups, according to a new poll. And a CNN/ORC International survey released Wednesday also indicates that the president's approval rating has inched over the 50% mark in CNN surveys for the first time since last May, when the polls were still registering the after effects of the death of Osama bin Laden. The number of Americans who say the economy's in good shape has jumped 13 points since January, though the survey shows a majority still think it is in poor shape.

Yep.  Worst month for the left in memory.
Posted by Zandar Permalink 5:05:00 PM No comments: Somebody Noticed!

It's truly not my intent to start another minimum wage discussion, but I want to honor any attempt to take care of American workers and take care of the people who are building and maintaining our country.

Along with spending on school modernization and renewable energy development, the Rebuild America Act calls for raising the minimum wage from the current federal level of $7.25 to $9.80 -- a 35 percent hike -- over the course of two and a half years, then indexing it so it rises with the cost of living. For restaurant servers and other tipped employees, the minimum wage before tips would leap from the current $2.13 to $6.86, and then track at 70 percent of the normal minimum wage.

It gets better, with talks about required paid sick leave and increased ability to join unions. If we are lucky, Harkin can start high, negotiate to the middle and come out with some benefits that help people on the brink of going under.

In the middle of the other news, I was encouraged by this. I hope you are too, even if just a little.
Posted by Unknown Permalink 2:29:00 PM No comments: Somebody Noticed!

Boy Arrested When He Came Back To Get His Tricycle

You can't make this stuff up, folks.  Read the full article here.


FORT WALTON BEACH — A 10-year-old boy was charged with felony burglary after he allegedly stole a $400 bicycle and an Airsoft rifle from a garage.

While the woman who lived at the address was inside the house, the child came into the garage and took her son's air rifle, then came back and took her bicycle, according to a Fort Walton Beach Police report.

The boy rode his tricycle to the house and left it there when he stole the bicycle, according to the report. He came back later to get his tricycle and was spotted by the woman's fiance.

He was arrested in front of his parents, for burglary of an occupied dwelling. It's laughable and horrifying all at once.
Posted by Unknown Permalink 12:05:00 PM No comments: Somebody Noticed!

In Which Zandar Answers Your Burning Questions

How did so many commentators predicting this would be a slam dunk for the Obama administration get it so wrong?

These people are crazy. At bare minimum by doing anything less than calling them crazy, you enable them.
Posted by Zandar Permalink 10:03:00 AM No comments: Somebody Noticed!

She Scienced Me, We're Blinded

Anti-science conservatives are now the norm in the United States, and their trust in science has now hit a new all-time low.

It's not just the vitriol surrounding this year's upcoming election: More conservatives than ever distrust science, according to a report released Thursday.

Just 35 percent of conservatives said they had a "great deal of trust in science" in 2010, a 28 percent decline since 1974, when 48 percent of conservatives—about the same percentage as liberals—trusted science. Liberal and moderate support for science has remained essentially flat since 1974, according to Gordon Gauchat, a sociologist at the University of North Carolina, Chapel Hill. He published his findings in the journal American Sociological Review.

About 41 percent of Americans identify as "conservative," according to an August poll by Gallup, up from 37 percent in 2008.

Gauchat says conservatives' rebellion against the "elite" and the shifting role of science in society is to blame for the decline. He argues that the conservative minority has rebelled against science in the same way it has against media and higher education.


Gauchat has a real point here.  Anti-science, anti-education, anti-critical thought dogma makes control of the populace easier, as well as making them poorer.  Conservatives keep talking about how self-made billionaires are the greatest people on the planet -- Bill Gates dropped out of college! -- and that education is a fool's game for those who can't afford to pay cash.

For the wealthy of course, well they go to school.  Republicans want you stupid, pliable, and uninformed.  You're much easier to fleece that way.  Look at all the conservative media telling you college is for suckers, that evolution is fake, that science itself is fatally flawed because it can never be 100% proven, unlike faith in a higher power.

Leave it all to God, they shout.  And also give us all your money.  Or those smart people will end up being your bosses or something!  Stupidity is Freedom, my friends!

Take the percentage of people worldwide who believe in evolution.  How successful have the anti-science jagoffs been?  This successful:

Notice in America how 40% of us believe evolution is true, 40% believe it's false, and 20% in the middle aren't sure.   Science isn't politicized?  Judging by these numbers, science and politics are the same.
Posted by Zandar Permalink 8:03:00 AM No comments: Somebody Noticed!