The mask slips, and Republicans accidentally tell the truth about what they will do to the 99% once they get back into complete power.  Today's contestant:  Wisconsin GOP Senate candidate Tommy Thompson as we find another secret video unearthed from the May primary season.

Declaring that he wants to “change Medicare and Medicaid like I did welfare,” Thompson asked a May gathering of the Lake Country Area Defenders Of Liberty in Oconomowoc, Wisconsin: “Who better to and who better than me, who’s already finished one of the entitlement programs, to come up with programs to do away with Medicaid and Medicare?”

The video has only now surfaced and its a blockbuster—especially in the aftermath of the release last week of a similar video that saw Republican presidential nominee Mitt Romney dismissing 47 percent of Americans as a "dependent" class unworthy of Republican consideration.

Just to repeat: a top Republican Senate candidate has been caught on video talking about how he would “DO AWAY WITH MEDICAID, AND MEDICARE.”

Just to repeat: “DO AWAY WITH MEDICAID, AND MEDICARE.”

As it was, Democratic candidate Tammy Baldwin has a pretty healthy lead right now, but this is Tommy Thompson's game over moment.  Let's not forget however that Thompson is considered a moderate and a bi-partisan diplomat, being the former governor of a swing state like Wisconsin.

Republican moderates wanting to do away with Medicaid and Medicare.  G'night, folks.

Ebb And Flow, You Know

President Barack Obama is trying hard to win veterans, but it looks like they’d prefer a new commander in chief.

The Obama campaign had been hoping that veterans and their families — especially among the post-Sept. 11 generation that served in Iraq and Afghanistan — would be part of their path to victory: They’re a high turn-out demographic and concentrated in battleground states, with nearly 1 million each in North Carolina, Ohio and Virginia, and 1.6 million in Florida.

But recent polls make clear that the president’s campaign is losing the battle. Even as Obama leads in Colorado, Florida, Ohio and Virginia, Mitt Romney is up by double digits among veterans in those states. Nationwide, he’s got a commanding 20-percentage-point lead over Obama and has even overtaken the president with younger veterans.


DOOOOOOOOOM...except for the fact that Mitt Romney is losing the far more numerous and far more likely to vote senior citizens crowd.

A poll released Monday by Reuters and Ipsos proves the obvious: if a candidate talks tough on Medicare and other social welfare programs of use to senior citizens, the elderly will return the favor by deserting his campaign in droves.

The latest unfortunate politician to learn this lesson is Republican nominee for president Mitt Romney, who has seen his support collapse by 20 percent among men and women over the age of 60 in the few weeks since the Democratic National Convention.


If you wonder where President Obama's lead is coming from, ask your grandmother.   Seniors don't like Vouchercare and Medicaid cuts, kids.  In the long run, Romney's in way more trouble here.
Posted by Zandar Permalink 7:32:00 PM No comments:

Three Out Of Four Ain't Good

A new Sunlight Foundation study on money in politics finds that so far through the 2012 election cycle, some 78% of the money spent though 9/21 on election ads has come from the "Citizens United effect", meaning that three out of four ad dollars this year are new thanks to the Supreme Court's ruling that outside groups can contribute unlimited dollars to super PACs.

But it's where that money is going that should worry you.  Sure, a lot of it is going to help Mitt Romney.  But far more is going to bury Democrats in Congress.

The money spent by Super Pacs, unions, corporations and non-profit groups is more than double what those groups spent in 2010, the first campaign in which the supreme court judgment had taken effect. Although Super Pacs are usually thought of being aligned with presidential candidates, the Sunlight Foundation found that much of these groups' recent spending has been focussed on more localised electoral battles.

"A deeper dive into the data shows that the latest uptick in outside spending is focused on congressional races: even in presidential battleground states, almost all the spending by outside groups is focused on House and Senate candidates," [Sunlight Foundation managing editor Kathy] Kiely wrote.

Of $465m of outside money spent so far in 2012 $460.8m comes from Super Pacs, corporations and other groups which do not have to register as political groups. An additional $4.1m comes from "electioneering communications": advertisements or political activities that focus on issues and policies – the oil industry, for example – and encourage voters to support a candidate without mentioning any politicians by name.


The big GOP PACs are putting those unlimited hundreds of millions where they can do the most damage, by buying Congressional races.   It's the single reason I think the GOP will actually gain seats in the House, and I think even Nate Silver is badly underestimating their chances of taking the Senate.  These last six weeks will see unprecedented spending on political ads all but locking up the airwaves.  Negative ads work, and endless streams of negative ads work very well.  I wouldn't be surprised if all these ads depressed turnout in battleground states, which is exactly what the GOP wants, too.

We'll see how much damage they will end up doing.
Posted by Zandar Permalink 5:02:00 PM No comments:

Arnold Schwarzenegger says his estranged wife Maria Shriver confronted him about his secret love child during a couple's therapy session and that she'd suspected for years ... according to his new book ... but the good news -- Arnold assured Maria he was still "turned on" by her.
In the book, obtained by the New York Daily News, Arnold says Maria took him to couple's therapy in 2011 -- the day after her left the California governorship.   He believed he was there for routine marriage counseling -- instead, Maria asked him point blank if he slept with the maid and spawned a love child years before.

What a jerk.  What an absolute rotten, clueless son of a bitch.

"So yeah, you caught me, I'm sorry I devastated you and broke your heart, and embarrassed you again in front of the entire nation.  But hey, I still think you're hot so that makes us cool, right?"

More women are running for Congress this year than ever before. The 18 women running for the Senate break the previous record of 14, set two years ago. Also, there are 163 female candidates for House seats, more than the 141 who ran in 2004.
That gives this election season a Year-of-the-Woman ring to it, says The Center for American Women and Politics. The center's director, Debbie Walsh, offered some reasons in a press release:

"... The crucial first election after reapportionment and redistricting, news events underscoring the need for women's voices in policymaking, and a presidential election year generating political excitement."

Great news to hear.  Women make up half the population, yet don't get nearly what they deserve in compensation or representation.

Ladies, get off your rumps and use your voice.  If not for you, for the women who need fairness in government.
Posted by Unknown Permalink 12:00:00 PM No comments:

Rachel Maddow notes just how bad Mitt Romney rambles on when he's nervous, and that his filters tend to turn off and he says whatever pops into his head.  The latest example, Romney's comments on his wife Ann's recent airplane incident with smoke filling the cabin forcing the craft to make an emergency landing.

At a fundraising event in Beverly Hills over the weekend, Romney noted that a plane carrying his wife, Ann, was forced to land because of a small fire.

“I appreciate the fact that she is on the ground, safe and sound. I don’t think she knows just how worried some of us were,” the Republican presidential nominee said. “When you have a fire in an aircraft, there’s no place to go exactly. And you can’t find any oxygen from outside the aircraft to get in the aircraft because the windows don’t open. I don’t know why they don’t do that. But it’s a real problem.”


Well, yeah, OK.  His wife was never in any real danger, but even Mitt the robot cares about her and was glad no one was harmed.  But you don't know why windows don't open in an airplane?  Even given as much time as Mitt Romney has spent in aircraft, he's never asked?  Hoboy.  Rachel was pretty ruthless:

“It’s a real problem that windows don’t roll down on airplanes?” she asked. “Is it also a problem that guns don’t shoot backwards through the barrel? Or that diving boards are only mounted over very deep water? Why don’t the windows roll down?”

“I don’t think he was joking because he couldn’t possibly be joking about his wife almost being in a plane crash,” Maddow added. “You can’t joke about that, especially with her standing right there.”

Email ThisBlogThis!Share to TwitterShare to FacebookShare to Pinterest
StupidiTags(tm): EPIC FAIL, I CANNOT WITH THESE GUYS, Mitt Romney, Scientific Stupidity

With 6 weeks to go until Election Day, Nate Silver runs the numbers on September poll leads and finds with the exceptions of "Dewey beats Truman!" and the Supremes screwing over Al Gore, the poll average leader at the 45 day mark went on to win 17 of the last 19 Presidential races.

Our polling database contains surveys going back to 1936. The data is quite thin (essentially just the Gallup national poll and nothing else) through about 1968, but it’s nevertheless worth a look.

In the table below, I’ve averaged the polls that were conducted 40 to 50 days before the election in each year — the time period that we find ourselves in now. (In years when there were no polls in this precise time window, I used the nearest available survey.)

The table considers the race from the standpoint of the incumbent party (designated with the color purple) and the challenging party (wearing the orange jerseys), without worrying about whether they were Democrats or Republicans. Mr. Obama’s position, for instance, is probably more analogous to that of the Republican incumbent George W. Bush in 2004 than it is to the candidate from his own party that year, John Kerry. 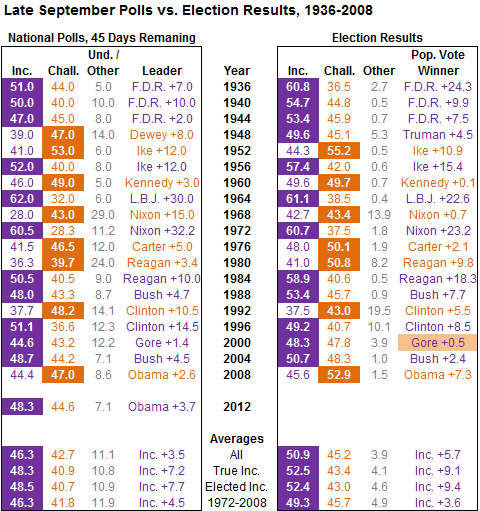 As you can see, President Obama's nearly 4 point lead is a larger one than he had in 2008.  It is however the smallest of the incumbent leads of a winner since FDR in 1944.  Six weeks is still enough to win, but by this point, the race appears to be very much decided.

At this point serious attention needs to be paid to shoring up the down ballot races as motivation to get people to the polls.  We'll see what happens.
Posted by Zandar Permalink 8:00:00 AM No comments: