The Daily Caller gives the game away regarding the Village love affair with Paul Ryan.  Front and center:  Nooners.

“It’s good to remember that the Republicans won in 2010 — rather overwhelmingly — and part of the reason they won in the congressional races was that the American people have really become concerned about the future of their country when they think about the endless hemorrhagic spending that is going on from Washington,” Noonan said.

“Now, Paul Ryan has been very associated, primarily associated on the Republican side, with being someone who has come forward and said, ‘We have got to more align revenues with what we are spending. We have got to get a little more reasonable here.’”

It’s important, Noonan added, for the Wisconsin congressman to define his policies for the public instead of letting his opponents define them first.

“The challenge for him and the danger, I think, of his nomination, is that there are a lot of Americans who are in financial hard times, a lot of Americans are living near the edge, a lot of Americans perhaps half are receiving some money from the U.S. government each month. Paul Ryan — when you include Social Security — Paul Ryan has to go to those people, I think, quickly, and convince them, ‘Look, I’m not trying to end the things you need. I am trying to save the things you need.’ The Democrats are going to say that he’s shark. He has to say that he’s the lifeboat.”

Yes Peggy, he has to convince the proles that cutting their Medicare, Medicaid, Social Security and eliminating food stamps and Pell Grants is good for them.  He's saving them from having to be anything other than dirt poor.  What a relief!
Nooners is of course completely clueless, but she's one of the many Villagers who pulled the wool over the eyes of millions of voters and got the GOP back into power.  She's clearly in the Romney/Ryan corner and will use her place on TV and in the papers to lie for him.
But remember, the "liberal media" is in the tank for Obama.
Posted by Zandar Permalink 9:00:00 PM No comments: Somebody Noticed!

The Battle Both Sides Wanted

Reince Priebus now saying that President Obama has "blood on his hands" on Medicare cuts.

RNC Chair Reince Priebus hit on the GOP talking point that it’s President Obama, not Paul Ryan, who is destroying Medicare in an interview on “Meet the Press.”

“If [any] person in this entire debate has blood on their hands in regard to Medicare, it’s Barack Obama,” Priebus said. “He is the one that’s destroying Medicare. We are the ones that are offering solutions… ”

PS, you know who else has those same "cuts" (which are actually reductions in future spending growth projections?)  Paul Ryan.

With Paul Ryan as his vice presidential nominee, Mitt Romney’s central argument pushing back against critics of the House budget chief’s Medicare plan is that President Obama cut deep into Medicare under the Affordable Care Act. But Ryan’s plan includes the same cuts, which don’t target beneficiaries.

“Unlike the current president, who has cut Medicare funding by $700 billion, we will preserve and protect Medicare and Social Security,” Romney said Saturday while introducing Ryan.

The trouble with this argument — made frequently by Republicans, including Ryan himself — is that Republicans have voted overwhelmingly for Ryan’s own budget which sustains the Medicare cuts in “Obamacare.” Conservatives argue that Ryan’s plan, unlike the Affordable Care Act, doesn’t use the Medicare savings to fund additional spending.

The Ryan Plan, now the Romney/Ryan Plan literally makes the same exact reductions and Republicans voted overwhelmingly for those reductions.  But of course Priebus doesn't mention that.

I wonder why.  Oh yes, because he's a scuzzy liar.

John Daly has an endorsement deal with Sonoma-based Loudmouth Golf, which explains the wild, colorful pants he wears on the course. Daly is taking his attire into another realm for today’s second round of the PGA Championship in Kiawah Island, S.C.
Daly will be wearing pants designed to increase awareness and fund research to find a cure for prostate cancer. As a Loudmouth spokeswoman put it, “John’s pants are splashed with brightly colorful fingers to represent the early detection prostate cancer screening procedure for men. It’s a humorous spin to raise awareness on a very serious examination that few men like to talk about. John is wearing the pants to show his support to raise awareness for prostate cancer.”

You can click here to read the full article and check out the pants.  They are actually pretty funny, and not at all offensive (as someone will surely try to say).

Daly has always had a sense of humor, why not use it for a good cause?
Posted by Unknown Permalink 2:30:00 PM No comments: Somebody Noticed!

CUMMINGTON — A 14-year-old male faces multiple charges after he allegedly snuck into a Swift River Road home in Cummington and beat a nationally known illustrator with a shovel.
Jane Dyer, an award-winning children's book illustrator whose work has appeared in New York Times best-sellers, continues to recover from the July 26 attack, which left her with blunt-force injuries and a wound to her head requiring about five surgical staples that were removed Monday afternoon.
The teen, who was quickly arrested by Cummington police, allegedly entered the Dyers' Cummington home about 5:30 p.m. July 26. When Dyer discovered him, she said, he struck her in the back of the head with a shovel.
The teen continued to beat her while she lay on the floor trying to deflect the attack and call for help, she said.
The youth then ran off and was apprehended by Cummington police about 30 minutes later, based in part on a description she provided, Dyer said.

I sat on this for a couple of days, hoping to discover the reason for the attack.  If there is one, they are keeping it quiet.

I'm really surprised by the violence of the crime.  It seems very personal, very full of hate.  Dyer is recovering and will be fine, with the exception of a little scarring (five surgical staples = big ouch).
Posted by Unknown Permalink 12:00:00 PM No comments: Somebody Noticed!

JM Ashby pulls up the House Democrats' report on what the Ryan budget plan means you'll be losing should these assclowns end up in the White House.  Here's the breakdown for the Cincy Metro area:

The Republican proposal would have even greater impacts on individuals in the Cincinnati metro area age 54 and younger who are not currently enrolled in Medicare. It would:

• Require the 772,000 individuals in the metro area between the ages of 44 and 54 to save an additional $180 billion for their retirement – an average of $180,000 to $287,000 per individual – to pay for the increased cost of health coverage over their lifetimes. Younger residents of the metro area will have to save even higher amounts to cover their additional medical costs.

Be sure to check out the map to see what benefits you will be losing under GOP control where you live.  Do you think that President Romney will veto the Ryan budget plan in 2013 when the Tea Party puts it on his desk?  If you're under 50, do you think Romney/Ryan gives a good goddamn about you?  They can win on just the Boomers and the seniors, and they plan on it.

By the way, do you know who has the closest voting record to Paul Ryan in the House?  I'll give you a guess.  Nate Silver runs the numbers.


Politics 101 suggests that you play toward the center of the electorate. Although this rule has more frequently been violated when it comes to vice-presidential picks, there is evidence that presidential candidates who have more “extreme” ideologies (closer to the left wing or the right wing than the electoral center) underperform relative to the economic fundamentals.

In fact, Nate finds that Paul Ryan is the most partisan veep candidate in modern American history. 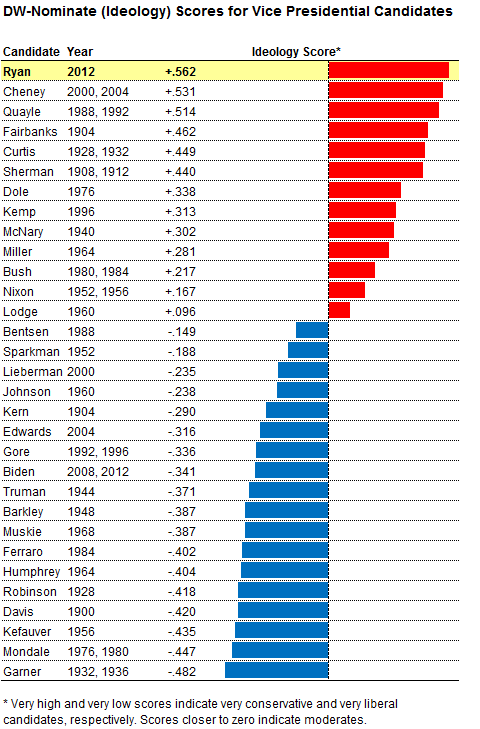 He's more of an ideologue than Dick Cheney.  Let that sink in when you say "But Romney will govern as a moderate."  Bullshit.