Here's the latest bucket of nothing out of Tucker Carlson's Daily Crank:

President Barack Obama was a guest at the 1991 wedding of ABC senior foreign correspondent and vice presidential debate moderator Martha Raddatz, The Daily Caller has learned. Obama and groom Julius Genachowski, whom Obama would later tap to head the Federal Communications Commission, were Harvard Law School classmates at the time and members of the Harvard Law Review.

The right is screaming about this...except for the fact that Genachowski and Raddatz have been divorced for several years now, and it was Barack Obama attending Genachowski's wedding as a guest.

This is how pathetic the Daily Crank is for attention.

If you want to know why fewer and fewer honest people go into either journalism or government, this is why.  Two decades from now, your Facebook posts will be used to make sure you never work in this town again, bucko.
Posted by Zandar Permalink 10:02:00 PM No comments:

...but not always in debates.  President Obama talked to radio host Tom Joyner today and assured listeners that he's coming out swinging next week:

Well, two things. I mean, you know, the debate, I think it’s fair to say I was just too polite, because, you know, it’s hard to sometimes just keep on saying and what you’re saying isn’t true. It gets repetitive. But, you know, the good news is, is that’s just the first one. Governor Romney put forward a whole bunch of stuff that either involved him running away from positions that he had taken, or doubling down on things like Medicare vouchers that are going to hurt him long term.

…And, you know, I think it’s fair to say that we will see a little more activity at the next one.


Well now.  That sounds like the President Obama we're used to seeing.  Clearly inundating America with outright bullcrap was an effective campaign strategy, and a gamble that paid off for the Romney campaign.  But the downside is, that only works once.  Now the gloves come off.

Thursday's Biden/Ryan showdown should be just as awesome.
Posted by Zandar Permalink 7:32:00 PM No comments:

Ladies, We Need To Have A Talk

Greg Sargent says Dem pollster Stan Greenberg has pinned down where President Obama took the damage from last week's debate:  among single women who bought Mitt Romney's premise, and didn't buy the President's performance at all.

Greenberg told me in an interview that his new research persuaded him that Mitt Romney beat Obama in the debate for a simple reason. Unmarried women — a critical piece of Obama’s coalition — did not hear Obama telling him how they would make their lives better. By contrast, they did hear Romney telling them he’d improve their lives.

Greenberg says the research also indicates a clear route to winning reelection, however. “This is a major turning point and an opportunity for the president,” he says.

Greenberg did dial sessions among Colorado swing voters during the debate, and also conducted post-debate questionnaires. He found that unmarried women didn’t respond to Obama’s vow to improve the economy — which they found lacking in a clear overarching message.

“They heard nothing there that was relevant to them,” Greenberg says. “They were not hearing about issues or problems or things that Obama would do that affect their lives.”

Romney, however, succeeded in communicating with unmarried women, Greenberg says, by prefacing talk of his five point plan with an extended discussion of the economic strain of middle-income Americans — which Greenberg calls an effective “set up that gave his details meaning.”


I've got to say that gosh, this explains Mitt's immediate flip-flop on abortion, now doesn't it?

The Obama administration is already on the case.

“It’s troubling that Mitt Romney is so willing to play politics with such important issues. But we know the truth about where he stands on a woman’s right to choose – he’s said he’d be delighted to sign a bill banning all abortions, and called Roe v. Wade ‘one of the darkest moments in Supreme Court history’ while pledging to appoint Supreme Court justices who will overturn it," said Lis Smith, a campaign spokesperson for Obama. "Women simply can’t trust him."


This is the message President Obama needs to hammer home in next week's town hall debate, and I'm looking forward to him doing just that.
Posted by Zandar Permalink 5:03:00 PM No comments:

Police in Texas arrested a man who allegedly lured a teenage girl into his home under the pretense he knew black magic and then sexually assaulted her.
Mario Munoz-Verudes, 60, was booked into the Harris County Jail on Saturday on rape charges.
The alleged sexual assault happened on Sept. 23. Investigators said Munoz-Verdures invited a 17-year-old church member into his home, claiming he could rid her of bad spirits.
He then allegedly raped the teen and “threatened to put a curse on her if she told anyone,” according to court records obtained by the Houston Chronicle.

Here's hoping justice comes through in this case.  Though I hope the girl learned a valuable lesson in making decisions.  Just because someone claims to be holy and righteous doesn't mean they are.  In fact, in most cases, the more they claim it the less likely it is to be true.  It's very sad that she learned it the hard way, but maybe her story will help prevent this from happening to another young girl.

It takes a certain kind of evil to exploit the inherent gullibility of the young.
Posted by Unknown Permalink 2:30:00 PM No comments:

An upcoming movie about Alfred Hitchcock has Jessica Biel and Scarlett Johansson looking very much like two of his leading ladies, Vera Miles and Janet Leigh.

The full story is exciting for Hitchcock fans, because it advertises a deeper look at his personality.  I like some of his movies but I am not a student of cinema in general, so I am more interested in the overall story.

Check out ScarJo playing Janet Leigh.  Despite Leigh's ridiculously petite frame, the resemblance is eerie.  It would be awesome to hear from Jamie Lee Curtis, an actress who also knows her mother's body language and mannerisms.  She would be able to offer a point of view that covered all angles of Johansson's portrayal of her famous mother.  The one difference I can see is Scarlett has her Black Widow expression on, and Janet Leigh never came across as intimidating to me.  She was sweet, kind and gentle, where Scarlett Johansson is a good person who can snap your neck, and it comes through. 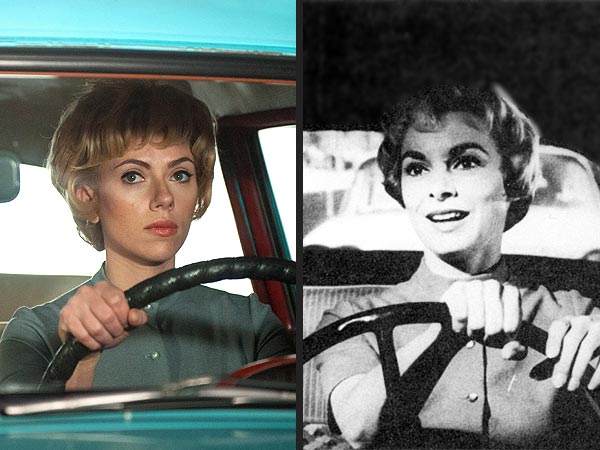 The ni-CLANG! moment edges closer, even in California.

Some residents are calling a symbolic political display erected by a Morgan Hill homeowner that features two watermelons and a noose racist and even vaguely threatening towards President Obama.

Many people driving along Foothill Avenue in Morgan Hill gawked at the display on a fence post in front of a home.

Just feet from a "Mitt Romney for President"  sign sat a chair, empty except for two watermelons.

Draped along the side of the chair was a rope tied into a noose with a sign set up to look like a teleprompter that read "Go back to Kenya."

The apparent reference to President Obama made some people passing by, including Republicans, uneasy.

"We shouldn't be threatening with a noose and a watermelon," said San Martin resident Ben Gomez. "I believe that's a little over the top. I like the chair and the teleprompter. I mean, they're just copying Clint Eastwood, so I can't blame them on that one. But the noose goes a little over the edge."


You think?  But it's okay, somebody called Bush bad names once, so all this is justified and FIRST AMENDMENT and DON'T TREAD ON ME.  Awesome.

I'd say I'm getting sick of this, but it's turning into a daily occurrence at this point, just like it did in 2008.  We're just not seeing all of the incidents publicly, I assure you.  The ones that are public like this piece of work here, well, the message is rather clear, isn't it?

You think the GOP is going to lift a finger to discourage this?  If so, I've got some beachfront property in Montana to sell you.
Posted by Zandar Permalink 10:03:00 AM No comments:

Republican presidential candidate Mitt Romney said in a Tuesday interview with an Iowa newspaper that he has no abortion-related legislation on his platform - although as president, he would reinstate through administrative means a policy banning nongovernmental organizations from using federal funds to provide abortions.

"There's no legislation with regards to abortion that I'm familiar with that would become part of my agenda," Romney said in an interview with The Des Moines Register.


That of course is not what Mitt's said in the past.  He's trying to have it both ways...even on the same day.

After the remarks were published online Tuesday, Romney’s campaign spokeswoman reiterated that he is opposed to abortion.

"Mitt Romney is proudly pro-life, and he will be a pro-life president," Andrea Saul said in a statement.


So which is it, Mitt?  Whatever position gets you the most votes that week?  This guy has all the convictions of a sponge.  But he won the debate, right?  That's all that matters to voters, right?
Posted by Zandar Permalink 8:00:00 AM No comments: