My Least Favorite Economist, Jim Pethokoukis, is too busy screaming and grunting at President Obama's plan to lower the corporate tax rate, but close loopholes in the tax code, to notice the real outrage here.

No corporation in the US actually pays 35% on income.  Too many loopholes.  K-Drum puts Jim to bed.

Wow! That's quite a bill of particulars. But you know what's amazing? In this entire thousand-word blast Pethokoukis apparently doesn't have room to explain the distinction between statutory tax rates and effective rates. But it only takes a sentence or two, so here it is. The statutory rate is the top rate in the tax table. Right now it's 35% for corporations.

The effective rate is what corporations actually pay after their accountants are done combing the tax code for deductions and loopholes. The former is one of the highest in the world. That latter has been falling for years and is now one of the lowest.

That's right! The actual federal income tax paid by corporations is one of the lowest in the world. Even if you think statutory rates are more important, surely this is germane to the conversation?


Not when the conversation consists solely of how President Obama has forever destroyed America's business community, he's destroyed the Dow all the way up to 13K.   Sheesh.

Posted by Zandar Permalink 10:00:00 PM No comments: Somebody Noticed!

As Steve Benen notes, pretty much everything is "Obama's Watergate" to Republicans:  going on vacation, eating a hamburger, brushing his teeth, and he possibly may have farted once HISTORY'S GREATEST MONSTER ahem sorry.  This week's Watergate, according to the American Spectator, is...Media Matters.

They're comparing the paranoid President Nixon's private investigators hired to find anything they could on his political opponents to...a media watchdog group.  See, a media watchdog group that calls out Republicans on their lies HAS to be working for President Obama, who HAS to have an "enemies list" just like Nixon! Q.E.D.!

And former Reagan official Jeffrey Lord spends 8 pages on this tortured logic.  Well, really, he spends 5 and a half pages rehashing Watergate itself, and the rest on that bastion of journalistic freedom, Tucker Carlson, and his hit jobs on Media Matters at the Daily Caller.

Media Matters head David Brock wrote a book: The Fox Effect: How Roger Ailes Turned a Network into a Propaganda Machine. And of course, the Obama White House HAD EVERYTHING TO DO WITH THE BOOK because of course the CIA and the FBI and the NSA and every other intel agency in DC had to have illegally mind-controlled the patriots at FOX to say bad things about the President because...umm...CHICAGO WAY!  WHITE HOUSE THUGS!  KENYAN TYRANT!  No way these guys are journalists who cracked the unknown secret that FOX News doesn't like Democrats!

Investigations are needed! Questions must be asked! And Jeffrey Lord says the President must be shamed into resignation because this is the WORST THING A PRESIDENT HAS EVER DONE.  Just the fact that Media Matters exists is central to his point!  It is irresponsible not to speculate!

Seriously.  8 pages of this.  It's hysterical.  There's Obama Derangement Syndrome, and then there's American Spectator, where tinfoil is a way of life.
Posted by Zandar Permalink 7:32:00 PM No comments: Somebody Noticed!

California and New York have both taken cracks at legalizing same-sex marriage, and 2012 looks to be the year the other big blue state in the nation -- Illinois -- considers laws to legalize it.

Less than a year since civil unions became legal in Illinois, a push to give same-sex couples the right to marry has emerged at the state Capitol with the support of high-profile public figures but also much skepticism that gay marriage will be approved this year.

The divisiveness of the issue was illustrated last week when Washington state's governor signed gay marriage into law and New Jersey's governor vetoed it. In Illinois, Chicago Mayor Rahm Emanuel and several statewide officials back gay marriage, but the topic is replete with potential political repercussions that many lawmakers want to avoid during an election year.

The conventional wisdom in Springfield is that lawmakers will first focus on winning March 20 primary contests as they run in new districts and then attempt to pass a budget and escape the spring session taking as few controversial votes as possible.

"It's going to be a tough year to pass any legislation that's outside of budget and pension issues," said Sen. David Koehler, a Peoria Democrat who championed the civil union legislation. "It's going to more of an election-year agenda in the state Legislature."


And that battle last year for civil unions was a close, close thing.  I'm not sure this effort will end up going anywhere, but then again with Rahmbo twisting arms, who knows.  It would be another big boost in a blue state with a population of nearly 13 million in shifting the debate that allowing same-sex marriage does absolutely nothing to "threaten" existing marriages in the country.

We'll see how this goes.
Posted by Zandar Permalink 5:00:00 PM No comments: Somebody Noticed!

In Which Bon Wants To Borrow $80 Million

The Scream is for sale.  Munch's The Scream, that one.  My all-time favorite piece of art, the last of its kind to be owned privately, is going up for auction.  They expect the price to reach a hefty 80 million at the May auction, a staggering amount even knowing what it is.  Which is a canvas smeared with Freaking Awesome and accented with Kick Ass.

A girl can dream, right?  Even non-artistic people usually have a favorite work, what is yours?  My second choice would be Van Gogh's Starry Night. 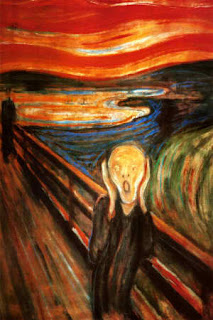 Posted by Unknown Permalink 2:37:00 PM No comments: Somebody Noticed!

Last year, her health plan paid for surgery, chemotherapy and radiation to treat her colorectal cancer. This year, her employer switched to a new plan, which won't even pay for a $39 box of ostomy bags.

Bass, a 57-year-old school bus driver from Hazlehurst, Ga., is among a rising number of Americans with shrinking health benefits and expanding deductibles. Bass said her new plan costs $333 per month to cover her and her husband, up from $210. The plan also comes with a staggering $3,000 deductible. Though her employer put $1,000 into an account to help pay for medical bills, Bass has already spent half of it on prescription drugs and other expenses. She'll soon need to find an extra $2,000 before her insurance kicks in.

Easier said than done. Bass takes home $395 a month. Her husband's disability benefits bring in another $1,285. "We are completely broke," she said. Her oncologist ordered a PET scan to check whether the cancer has stayed away, but she doesn't know how much it costs or whether her plan will cover it. She's going in for the test anyway.

It's happening more often, and more people are having to choose between insurance premiums and groceries, and the insurance doesn't save them from financial ruin when the inevitable happens and they become sick or injured. The deductible on my plan is $7,500. It's pretty hard to just sit that aside in case we need it. And I pay over $300 per month for that coverage for me and my husband, no children. Compared to the insurance at his employer, there is no doubt we're lucky to have that.

Then you have assholes like Rick Santorum, who says health care for women should be limited, in case they should learn there is a problem with the fetus. "Prenatal testing, amniocentesis, does in fact, result more often than not in this country in abortions. That is a fact," as quoted by CNN.

The people are falling like a house of cards.  Too many were one check or disaster away from a financial death spiral, and those disasters are happening everywhere.  Fate has a funny way of kicking a man when he's down, and right now nobody is safe.  Single parents are struggling and going under, and people who were stretched a bit thin are now deep in the red.  Insurance isn't enough coverage, and costs so much that families facing hard times are tempted (or forced) to put their money elsewhere.

Or, like the news has said for the last five damned years, we're facing a healthcare crisis.  Gee, if only we had some plans on the table to make sure people had reasonable access to care and safety from greedy hospitals and companies?  Wouldn't it be nice if someone was trying to work a safety net so that fewer people hit that tipping point where there is no return?
Posted by Unknown Permalink 12:02:00 PM No comments: Somebody Noticed!

With the recovery starting to roll forward, The Great Othering begins in earnest. Rev. Franklin Graham won't say President Obama is a Muslim...but he can't completely rule it out, either.


“(Obama’s) said he’s a Christian, so I just have to assume, you know, that he is,” Graham said on MSNBC’s Morning Joe, adding that he doesn’t know whether Obama has accepted Jesus Christ as his lord and savior. Then Graham repeated his claim that Obama’s father was a Muslim and therefore the “Muslim world sees (Obama) as a son of Islam.”

Graham said he doesn’t believe Obama is personally a Muslim, because, you know, the president has said that he is not. But he wouldn’t go so far as to say “categorically” that Obama doesn’t practice Islam.

“I can’t say categorically because Islam has gotten a free pass under Obama,” Graham said, referring to the Arab Spring protests across the Middle East and North Africa. He called deposed Egyptian president Hosni Mubarak a dictator, but said he kept the peace with Israel. As dictators fall, Graham said, Islamists are taking control of the Middle East. “Now, those Christian minorities throughout the entire Arab world are under attack.”

The prospect of President Santorum and a theocracy that would roll back the laws and put those people in their place again is too tempting to resist for the fever bright nutbars on the right.  They know if they get Santorum as the nominee, he'll get 40% of the vote to Obama's 40% no matter how dirty, how awful, how racist, how bigoted, and how repugnant their campaign is.  All they need is half the 20% in the middle to side with them through intimidation, extortion, or outright fear-mongering.


And they know it.  No accident that the same day this happened...


We get "Obama's a secret Muslim.
Posted by Zandar Permalink 10:02:00 AM No comments: Somebody Noticed!

You can't put a gun rack on a Chevy Volt, eh Newt Gingrich?

Posted by Zandar Permalink 8:03:00 AM No comments: Somebody Noticed!