A very interesting story in Nebraska shaping up this weekend as the state's Republican lieutenant governor, Rick Sheehy, the hand-picked successor to the state's current GOP governor, has abruptly announced his resignation after the Omaha World-Herald discovered he was making inappropriate phone calls to women on his state cell phone.

Lt. Gov. Rick Sheehy resigned his post abruptly Saturday after questions were raised by The World-Herald about improper cell phone calls to four women, other than his wife, during the past four years.

An investigation by The World-Herald discovered that Sheehy made about 2,000 late-night telephone calls to the women on his state-issued cell phone, many of them long conversations held in the wee hours of the night.

"I've got a knot in my stomach. I'm deeply disappointed. He's done a lot of good things for the state, but that trust was broken, and he's resigned," Heineman said.

He said he would begin the process of filling the post Monday.


Even better, Sheehy's wife Colleen filed for divorce in July after a 28-year marriage.   The Omaha World-Herald started asking questions, and bang: another GOP hypocrite gets taken down by his own stupidity.  But here's the thing: calling women who aren't your wife on the state cell phone isn't worth resigning over, and frankly being a Republican in Nebraska right now means he still would have won in 2014 after two years had passed on the story.

There's something more to this story.  Something big.  Stay tuned.
Posted by Zandar Permalink 9:32:00 PM No comments:

The White House released this photo of the President shooting skeet at Camp David last year: 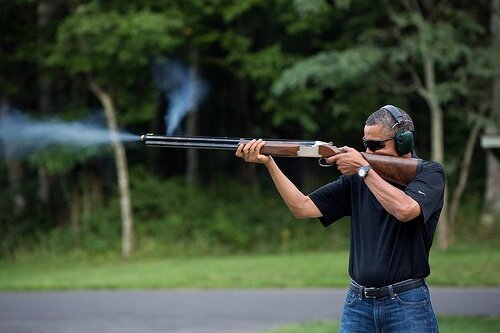 What you see here is of course, dependent on your point of view. Steve M:

I don't hunt. Why? Because I grew up in a large city (Boston) and live in another large city (New York). Barack Obama grew up mostly in Honolulu. He's lived since then in places such as New York, Chicago, and Washington, D.C. Of course he doesn't spend a lot of time shooting.

Gun lovers want us to understand and respect their culture. Hey, why don't you guys try understanding and respecting ours? If you say we shouldn't have contempt for your enjoyment of hunting and target shooting, well, fine, I accept that -- but you need to drop the contempt for those of us who didn't grow up with those recreations, and never developed a fondness for them. It just wasn't part of our culture, and that's OK.

The contempt isn't for non-gun culture.  It's for this President specifically.  There is nothing this President could do to convince tens of millions of Americans that this picture is real, which is why the White House did this.  They are trolling the racist haters, they are trolling the Village, and I for one can't stop laughing at how utterly stupid both groups are.

What really, really, REALLY pisses them off is the fact this President outsmarted them yet again.
Posted by Zandar Permalink 3:10:00 PM No comments: