Yes America, Republicans think you are this stupid.

Sen. John Barrasso (R-Wyo.) said Sunday that he does not believe President Obama’s gun-control proposals will be brought to the Senate floor for a vote.

Speaking on CNN’s “State of the Union,” Barrasso said election worries among Democrats will sideline legislation that could restrict gun ownership.

Obama has called on Congress to institute universal background checks for all gun sales as well as bans on assault weapons and high-capacity magazines, among other items.


“I don’t think Sen. Harry Reid [D-Nev.] even brings it to the Senate floor because he has six Democrats up for election in two years in states where the president received fewer than 42 percent of the votes,” Barrasso said. “He doesn’t want his Democrats to have to choose between their own constituents and the president’s positions.”

President Obama knows what he's doing here:  the will of the American people.
Posted by Zandar Permalink 9:29:00 PM No comments: Somebody Noticed!

Have We Turned The Corner?

Bill McBride over at Calculated Risk argues that the economy will get better, or better enough anyway that President Obama will be able to take serious credit for reducing the deficit: 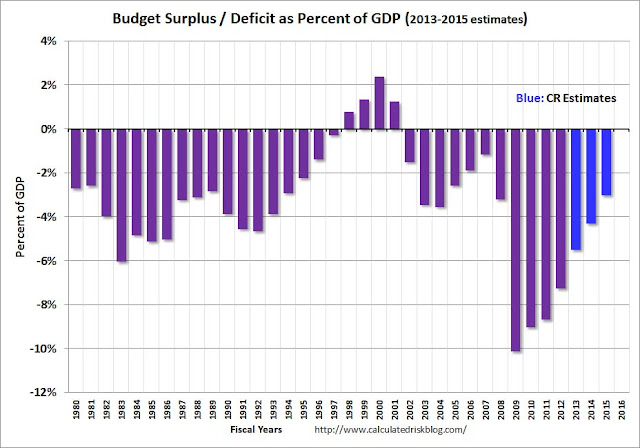 And another key graph on the US deficit. As we've been discussing, the US deficit as a percent of GDP has been declining, and will probably decline to around 3% in fiscal 2015.

This graph shows the actual (purple) budget deficit each year as a percent of GDP, and an estimate for the next three years based on current policy (Jan Hatzius at Goldman Sachs estimates the deficit will 3% of GDP in 2015).  Note: With 7.8% unemployment, there is a strong argument for less deficit reduction in the short term, but that doesn't seem to be getting any traction.

Now there are a lot of if's here.  And the big screaming question is "Why aren't we doing what we can to lower the unemployment rate?"  And of course, the big screaming answer is "Republicans refuse to allow anything to be done."

But President Obama is reducing the deficit.  It's dropping and continuing to drop.
Posted by Zandar Permalink 3:35:00 PM No comments: Somebody Noticed!

Ezra Klein comes up with a pretty good observation:  Moderate Republicans have A) accepted that the right wing of the party is increasingly awful, and B) it's all President Obama's fault.

My colleague Michael Gerson wrote one of the earliest versions of this column. As he put it, Obama “knows that Republicans are forced by the momentum of their ideology to take positions on spending that he can easily demagogue.” So he has, in a bid to “break his opponents,” decided to “force the GOP to surrender on the debt limit, with nothing in return” and to “require Republicans to accept new taxes in exchange for any real spending reductions.”


In other words, it's just not fair that President Obama is hitting home runs off such juicy hanging fastballs the GOP nutjobs keep tossing over the plate.  If President Obama really cared about bipartisanship, he'd surrender completely to the Republicans and stop making them look bad.  Sure.  And if college co-eds would stop wearing outfits like that...you get the picture.  This is outright victim blaming, period.

Jon Chait comes up with a similar observation on the latest idiocy from David Brooks.


What Obama should be doing in response, Brooks argues, is push for policies that provoke no opposition even from the craziest of the Republicans: “We could do some education reform, expand visa laws to admit more high-skill workers, encourage responsible drilling for natural gas, maybe establish an infrastructure bank.” Brooks argues that these issues would be uncontroversial enough to “erode partisan orthodoxies and get back into the habit of passing laws together.” Then, maybe we could pass some laws under a future president.


Note that solving actual problems is besides the point here. Brooks is almost explicit about this. He begins with the need for initiatives that he thinks will lead to happiness and comity between the parties in Washington, and then comes up with policies that might fit the bill...


Here's the reality.  Short of resigning from the Presidency along with Joe Biden and then putting John Boehner in the White House, there is nothing that President Obama can do that will make the Republicans like him.  And if the Republicans get their way, pretty much every law in the last four years gets thrown out.  "Just humor the lunatics" is not a viable governing strategy.  "Getting rid of the lunatics" is.

We need to remember that in 2014.
Posted by Zandar Permalink 9:18:00 AM No comments: Somebody Noticed!