Rand Paul continues to top his easy primary rampage over Tray Grayson with arguably the worst general campaign in the history of the universe as this time he manages to alienate anyone who seems to think BP or Massey Energy might be at fault in the recent spate of deadly accidents this year.  Steve M.:


There's a lot of snickering on our side right now because Rand Paul seems to have put his foot in his mouth again while talking to ABC's George Stephanopoulos about the Gulf oil spill:

What I don't like from the president's administration is this sort of, you know, "I'll put my boot heel on the throat of BP." I think that sounds really un-American in his criticism of business.

What's more, as Betty Cracker notes, "Paul managed to imply that maybe the reaction to the recent mine explosion was a touch too anti-business as well." He said:

I mean, we had a mining accident that was very tragic and I've met a lot of these miners and their families. They're very brave people to do a dangerous job. But then we come in and it's always someone's fault. Maybe sometimes accidents happen.

This should really, really hurt him, because, after all, he's a tea party candidate, and that means his supporters are self-reliant people with callused hands who really know the pain of something like a mine disaster.

You'd think that in coal country, Rand the populist candidate would be a little more careful backing Massey Energy over the people.  But as Steve points out, Ol' Rand did the best in exurban areas: the high-property value suburbs of Cincy, Lexington and Louisville. 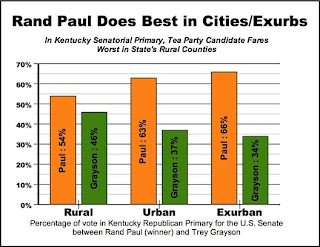 So Paul's base is people whose fingernails never get dirty. Because, after all, that's who the teabaggers are.

They don't care if the oceans get brutalized or a few miners die. They just want you to cut their damn taxes.

Got that right. Hey fellow Kentucky voters?  You're getting played by the biggest corporate lapdog in the history of the world.  Think Rand Paul gives a damn about coal miners, oil riggers, car plant workers or truck drivers?  Think again.  The only thing that matters to this guy is the rights of business owners to run you into the ground.  You're just capital to the capitalists, dig?

And you can be replaced real easy.  You're just one more unfortunate cost that Rand Paul and his Galtie friends have to pay that lowers their profits.

And should there be any doubt, his friends in the GOP are right behind him, trying to change history by yelling ROBERT BYRD at the top of their lungs and ignoring the last 40 years of actual Democratic Party history, not to mention a GOP Presidential candidate named Barry Goldwater who ran in 1964 on repealing the Civil Rights Act.

These guys are playing you for fools with this populist act.  They could give a damn about the little people.  They just want you to hand over your vote to them so they can continue to rape the economy.
Posted by Zandar Permalink 1:17:00 PM

Did you not learn anything from getting roundly thrashed on your own blog yesterday when you mentioned Rand Paul?

Rand Paul is right. We do need to debate the merits of that legislation again. He's the only one brave enough to say it's not working for anyone...

Or ar you going to compound your ignorance more and say the Civil Rights Act has actually eliminated racism? It hasn't after 45 years, after all. People understand this.

Yeah, right, Arcadian -- sure, we have a black president and we've had two black secretaries of state and we have black CEOs at Fortune 500 companies, like Stanley O'Neal, but we had plenty of black presidents and Cabinet members before the Civil Rights Act, like, um ... um ... and there were Fortune 500 CEOs who were black like ... um ...

You just brilliantly made my point for me, Steve. Thank you.

Either the people you listed are the best, most qualified people for the job, in which case the Civil Rights Act is no longer needed and should be repealed, or they got the job because of their race and not their ability, meaning the government's interference in such matters is a major detriment to capitalism, and the Civil Rights Act needs to be repealed.

Which is it? Either way, you've just proven why the Civil Rights Act needs to go. You're just as much of a hack as Zandar.

ROFL, that's pretty tasty, too, there Arcadian. In the two comments where you accused other people of hackery, you have defended your candidate's statement that businesses should be legally allowed to discriminate based on race and no other factor, and then stated that since discrimination has been greatly reduced since the CRA was passed, the CRA is no longer necessary.


Spectacular, even for a wingnut.
Hack Troll is a hack.

*throws the flag on Arcadian*

One minority getting into a position of power, even Barack Obama as President, is not proof that racism and discrimination has ended.

Is that really your best argument?

Oh, Arcadian, how could I have been so blind? Our options for assessing the Civil Rights Act are strictly binary -- either all racism has been eliminated by the law or none has. And either way you're right, because if it's a complete success we don't need it anymore and if it's a complete failure we never got any benefit from it.

The third possibility, which doesn't even exist in the rank, fetid Mom's basement of your thinking, is that the law was part of a reversal of appalling legal and cultural wrongs -- and it's done a great deal of good, but it hasn't been the vaccine that wiped out all racism forever. To you, that's just categorically impossible, because, as a typical libertarian, you live in a world of absolutes, -- capitalism is pure good; the government is pure evil; the marketplace is perfect and all actions, including your own expulsion of Cheeto flatulence, follow the strict rules of rational calculation of enlightened self-interest, all of which, taken in the aggregate, balance perfectly, and create a utopia in which no one is ever cruel or brutal to anyone else, because the one perfect being, the market, would never allow such a thing.