A meteor went screaming over the Ural Mountains near the Russian border with Kazakhstan early this morning, leaving behind hundreds injured from the impact wave as it detonated over the city of Chelyabinsk.

People heading to work in Chelyabinsk heard what sounded like an explosion, saw a bright light and then felt the shock wave, according to a Reuters correspondent in the industrial city 1,500 km (950 miles) east of Moscow.

The fireball, travelling at a speed of 30 km (19 miles) per second according to Russian space agency Roscosmos, had blazed across the horizon, leaving a long white trail that could be seen as far as 200 km (125 miles) away.

"I was driving to work, it was quite dark, but it suddenly became as bright as if it were day," said Viktor Prokofiev, 36, a resident of Yekaterinburg in the Urals Mountains.

The meteor, which weighed about 10 tons and may have been made of iron, entered Earth's atmosphere and broke apart 30-50 km (19-31 miles) above ground, according to Russia's Academy of Sciences.

The Interior Ministry said about 1,200 people had been injured, at least 200 of them children, and most from shards of glass.

Meanwhile, we dodged an even larger rock this afternoon as asteroid 2012 DA14 missed the Earth by 17,500 miles...considerably less than the circumference of the planet we're on. 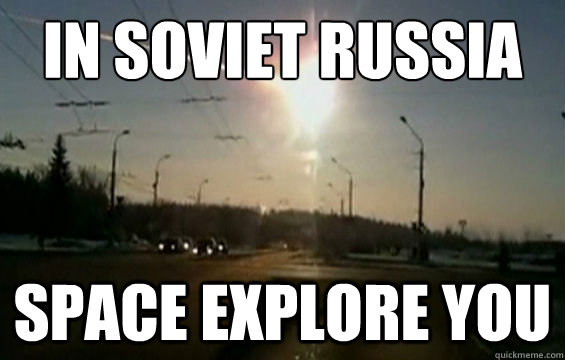 Email ThisBlogThis!Share to TwitterShare to FacebookShare to Pinterest
StupidiTags(tm): I'm The Best At Space, Scientific Stupidity