The right (and some on the left) have long been screaming at President Obama about how America's unemployment rate is not "really" 5% because of the labor force participation rate.  Millions of Americans have left the work force, the argument goes, and if they were included at the same rate as they were when President Obama took office, the unemployment rate would still be in double digits.

That argument is complete garbage of course, mainly because 60% of the people who have left the labor force are...wait for it...retiring Baby Boomers!  And that's actually good news, and why the labor market is improving. 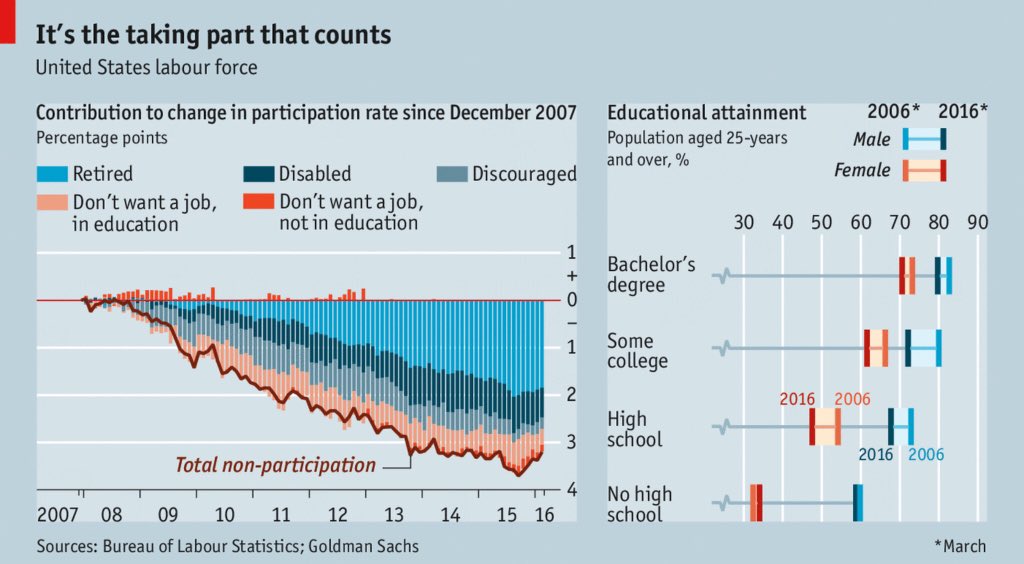 But if people outside of the labour force are very unlikely to rejoin it—then the outlook for wages is better. A new paper from the IMF assesses what is most likely to happen. Pretending that the participation rate of individual age groups did not change during the recession, but allowing the population shares of each age group to change as they actually did, the paper's authors show that “demographic change” explains about half of the total decline in the participation rate since 2007 (compare the red line with the blue line in the second chart).

“Demographic change” covers a few things. For instance, during the Great Recession the first baby-boomers became eligible for social-security retirement benefits. And young people stayed in higher education longer during the crisis, which meant that they were less likely to be available for work than before. More detailed regressions in the paper also find such factors to be important.

In addition, the paper warns that even if bad economic conditions push people out the labour market, better conditions will not necessarily bring all of them back in. Disability insurance (DI) is one reason why. The number of DI recipients was rising sharply even before 2007, and when the recession hit the rise continued. Recipients of DI tend to exit the labour force permanently and do no return as cyclical conditions improve. For this reason, over the next few years it may only be possible to reverse about one-quarter of the post-2007 decline in participation.

But, despite these results, it would be wrong to conclude that America's labour market has no "slack". Yes, it may be difficult for the labour force to rise much, even as the economy improves. Yet there is plenty of capacity for those already in it to work longer hours. The number of full-time jobs is lower than before the recession hit. The number of part-time jobs is much higher. And many of those would prefer to work full-time instead. Fewer people now hold multiple jobs, which also suggests that Americans are not working as much as they would like. Who says hard work doesn't pay off?


The labor market got crushed by the Bush Recession, and then millions of Boomers took retirement and Millennials stayed in school.  The labor market is getting better, but slowly.

Imagine where we would be if Republicans at local, state, and federal levels hadn't been so keen on sabotaging America to spite President Obama.