Last Call For Race To The Bottom

A groundbreaking new Harvard study of my generation (late Gen X/early millennials born from 1978-1983) finds that even when black men come from wealthy families, have similar education to white men, have similar family situations with stable two parent households, and even coming from families with similar net worth, they earn significantly less than white men.


Black boys raised in America, even in the wealthiest families and living in some of the most well-to-do neighborhoods, still earn less in adulthood than white boys with similar backgrounds, according to a sweeping new study that traced the lives of millions of children.

White boys who grow up rich are likely to remain that way. Black boys raised at the top, however, are more likely to become poor than to stay wealthy in their own adult households.

Even when children grow up next to each other with parents who earn similar incomes, black boys fare worse than white boys in 99 percent of America. And the gaps only worsen in the kind of neighborhoods that promise low poverty and good schools.

According to the study, led by researchers at Stanford, Harvard and the Census Bureau, income inequality between blacks and whites is driven entirely by what is happening among these boys and the men they become. Black and white girls from families with comparable earnings attain similar individual incomes as adults.

“You would have thought at some point you escape the poverty trap,” said Nathaniel Hendren, a Harvard economist and an author of the study.

The study, based on anonymous earnings and demographic data for virtually all Americans now in their late 30s, debunks a number of other widely held hypotheses about income inequality. Gaps persisted even when black and white boys grew up in families with the same income, similar family structures, similar education levels and even similar levels of accumulated wealth.

The disparities that remain also can’t be explained by differences in cognitive ability, an argument made by people who cite racial gaps in test scores that appear for both black boys and girls. If such inherent differences existed by race, “you’ve got to explain to me why these putative ability differences aren’t handicapping women,” said David Grusky, a Stanford sociologist who has reviewed the research.

A more likely possibility, the authors suggest, is that test scores don’t accurately measure the abilities of black children in the first place.

If this inequality can’t be explained by individual or household traits, much of what matters probably lies outside the home — in surrounding neighborhoods, in the economy and in a society that views black boys differently from white boys, and even from black girls.

“One of the most popular liberal post-racial ideas is the idea that the fundamental problem is class and not race, and clearly this study explodes that idea,” said Ibram Kendi, a professor and director of the Antiracist Research and Policy Center at American University. “But for whatever reason, we’re unwilling to stare racism in the face.”

The most interesting finding is that the race gap doesn't exist between black and white girls from wealthy families...but both groups earn significantly less than white men.  But here's what killed me when I read it: 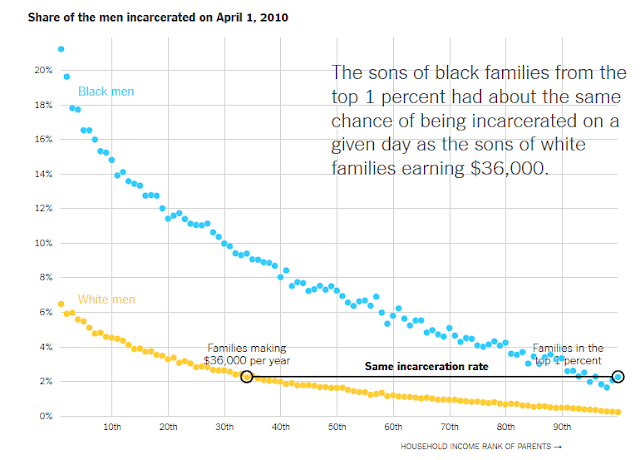 More than 20% of black boys from the poorest families in America end up in prison.

The system is broken and it has been for decades.  Or rather, it's working as designed to generate plenty of "product" for the prison industry.

But what this study does is put to rest the zombie lie that somehow white Americans are being discriminated against, that it's hard to be white in America, and that black Americans are somehow getting all the special treatment.  We've got an entire political party built on that lie currently, and the most racist president since the Civil War (although Woodrow Wilson remains high on that particular list) and for now it has near total control of the country.

Maybe this will start to change peoples' minds, but when has America ever paid attention to fact on race?
Posted by Zandar Permalink 9:07:00 PM