Whatever scintilla of a doubt that somehow had not been crushed into atoms that Donald Trump was not fully compromised and conducting US foreign policy at the behest of one Vladimir Putin was annihilated this morning in Helsinki at the joint press conference following Trump's two-hour private meeting with his Russian supervisor.

Asked whether he believes his own intelligence agencies, which say that Russia interfered in the 2016 United States election, or Mr. Putin, who denies it, Mr. Trump refused to say, but he expressed doubt about whether Russia was to blame.

Mr. Trump raised the matter of Russian electoral meddling, the two leaders said at a news conference after their meetings, and Mr. Putin reiterated his denial of Russian involvement.

Dan Coats, the director of national intelligence, and other American intelligence officials “said they think it’s Russia,” Mr. Trump said. “I have President Putin, he just said it’s not Russia. I don’t see any reason why it would be.”

But when asked directly whom he believes, Mr. Trump changed the subject to misconduct by Democrats during the campaign.

The president’s ambivalence, after the indictments of Russian intelligence agents for the election hacking, and after the findings of congressional committees, represents a remarkable divergence between Mr. Trump and the American national security apparatus.

Mr. Putin said: “President Trump mentioned the so-called interference of Russia in the American elections. I had to reiterate things I said several times: that the Russian state has never interfered, and is not going to interfere, in internal American affairs, including the election process.”

He offered to have Russian intelligence agencies work with their American counterparts to get to the bottom of the matter.

“I addressed directly with President Putin the issue of Russian interference in our elections,” Mr. Trump said. “I felt this was a matter best discussed in person. President Putin may very well want to address it, and very strongly, because he feels very strongly about it, and he has an interesting idea.”


To recap: Trump went to Finland to meet the leader of a country that did untold damage to our electoral process, shook his hand, looked him in the eye, and said "I don't believe you did it" and not only did he not confront Putin about the 2016 election hacking of Hillary Clinton and the Democratic party, he publicly sided with Putin in front of him over America's entire intelligence community.

Needless to say, the unprecedented and historical damage from today will reverberate for decades.  Germany, arguably our most important ally in the EU and NATO right now, with a $4 trillion economy, has all but given up on the US coming to its senses.

Germany’s foreign minister said on Monday Europe could not rely on Donald Trump and needed to close ranks after the U.S. president called the European Union a “foe” with regard to trade.

We can no longer completely rely on the White House,” Heiko Maas told the Funke newspaper group. “To maintain our partnership with the USA we must readjust it. The first clear consequence can only be that we need to align ourselves even more closely in Europe.”

He added: “Europe must not let itself be divided however sharp the verbal attacks and absurd the tweets may be.”


For Berlin to admit this on the same day as this summit is staggering.  The NATO alliance is crumbling before our eyes.  Both Director of National Intelligence Dan Coats and CIA Director Gina Haspel should resign in protest over this, along with the US Ambassador to Russia, Jon Huntsman and Secretary of State Mike Pompeo.

None of them will however.  The reality is that Trump is so weak that he can't accept that he didn't win without Russian help and everyone knows it, so on we will go with this farce until something happens that's just too much for us to take and we shut him down.

Meanwhile, while all this was happening, there was yet another arrest and indictment in the Mueller investigation to greet Trump when he arrives back in the states on charges of being an unregistered foreign agent.

A Russian woman who tried to broker a pair of secret meetings between candidate Donald J. Trump and the Russian president, Vladimir V. Putin, during the 2016 presidential campaign, was charged Monday and accused of carrying out a secret Russian effort to influence American politics.

The Justice Department said in court documents that the woman, Mariia Butina, worked to establish “back channel” lines of communication with American politicians. “These lines could be used by the Russian Federation to penetrate the U.S. national decision-making apparatus to advance the agenda of the Russian Federation.”

Ms. Butina, whose first name is more commonly spelled Maria, twice tried to set up a meetings between Mr. Trump and Mr. Putin in 2016. The charges announced Monday do not name Mr. Trump but they make clear that Ms. Butina’s overtures were part of a Russian intelligence operation.


The affidavit that goes along with this arrest is astonishing. 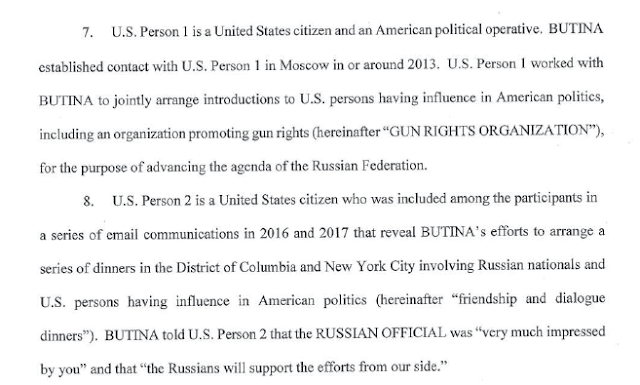 I understand the argument that the 12 Russian GRU agents indicted on Friday will never see the inside of a US courtroom, but Maria Butina is under federal arrest right now and she was arranging meetings to influence politicians in our nation's capital. 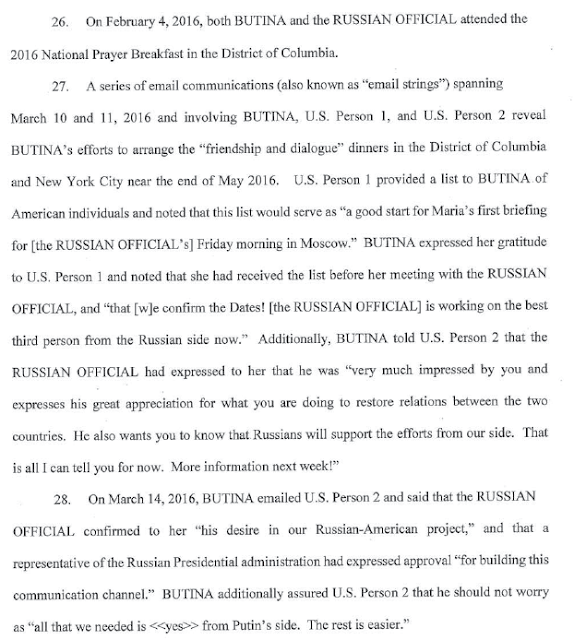 Again, this is Mueller laying out Americans working with Russian agents with then intent of influencing US politics.  It's a bad, bad look for US Person 1 and US Person 2 here, and I'm willing to bet cash money that one or both of these American citizens were part of the Trump campaign at the time.  there's also no doubt that the Russian Official is Butina's boss, our old friend and Russian gun aficionado Alexander Torshin.

Oh, and speaking of working for the Russians:

Hi, NRA. Howsit going over there?  You guys doing OK?  Cause US Person 1 sounds like they might be former NRA President and Moonie Times opinion page editor David Keene, or possibly even the most recent NRA president, Wayne LaPierre.

The Washington Post believes Person 1 is GOP consultant Paul Erickson, who was the fixer for the proposed meeting between Donald Trump, Butina, and Torshin at the 2016 NRA Convention in Louisville, while Casey Michel at Think Progress believes Person 2 is George O'Neill Jr., a Rockerfeller heir who has been big in GOP circles and threw quite a dinner that included Butina, Torshin, and Erickson.

I wouldn't hold your breath for the sanity part, as Trump as the GOP are in too deep, but we still ostensibly have an election in November that could go a long way in restoring sanity to our country.  But as Charlie Pierce notes, that may be far too late.  Republican senators could stop Trump now if they wanted.

The fact is that there is only one constitutional method by which this renegade presidency* can be stifled before the November midterm elections—and it needs to be reined in as quickly as possible. The only available option is to have two or three Republican senators announce that, hereafter, they will caucus and vote with the Democratic minority between now and November.

It is clear that nobody can control the president*. Impeachment has to begin in the House of Representatives, and, at the moment, the House is a barn full of maniacs and its speaker is an invertebrate life-form who can’t keep woodchucks from eating his car. The Democratic caucuses on Capitol Hill are very limited, institutionally, in what they can do. The people in general have to wait until this fall to make their feelings known, and that through a compromised system of national elections.


They will do nothing, of course.  They are compromised just as much as Trump is, and they know it.

We are being sold out in real time, guys.  Putin made it clear what Trump's marching orders are.  We'll only find out when it's far past time we could have done anything about it.
Posted by Zandar Permalink 9:53:00 PM