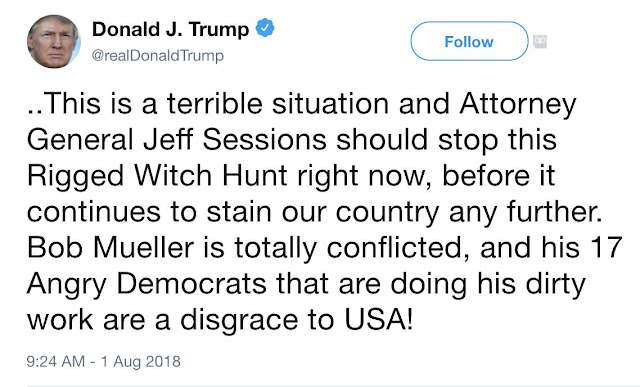 Obstruction of justice?  Never heard of it.

Sessions "should stop this Rigged Witch Hunt right now, before it continues to stain our country any further," Trump tweeted. "Bob Mueller is totally conflicted, and his 17 Angry Democrats that are doing his dirty work are a disgrace to USA!" Trump also called the probe a "terrible situation."

The demand comes at what looks to be a pivotal point in the probe: Mueller's team is prosecuting former Trump campaign manager Paul Manfort on financial allegations, and some Trump aides believe that Mueller will submit a report soon on his findings as they relate to the president. The Manafort trial began Tuesday.

Democrats quickly defined the president's tweeted demand to the attorney general as another attempt at obstruction, one of the things Mueller is investigating.

"This is an attempt to obstruct justice hiding in plain sight," tweeted Rep. Adam Schiff, D-Calif., top Democrat on the House Intelligence Committee.


Yes.  Yes it is.  But Republicans in Congress and Trump supporters don't care and won't lift a finger. They won't when Trump eventually tweets that he's firing Sessions, Rosenstein, and Mueller either.  That day is coming sooner rather than later, judging by Trump's tantrum this morning.  It really won't be long now.