"The real problem with this IRS scandal is how the White House refused to tell Congress anything about this investigation until after the election, it was a massive cover up and...

The Treasury Department Inspector General for Tax Administration sent a letter to Congressman Darrell Issa and Congressman Jim Jordan on July 12, 2012 informing them they would be auditing the IRS in response to their concerns that certain groups might be receiving extra scrutiny. The letter came in response to a June 28th letter of that year from Congressman Issa.

The letter states that after meeting with the staff of the Committee on Oversight and Government Reform, which Issa chairs, the IG Office of Audit began work on the issue. The IG offered in the letter to provide a status update to the staff of the committee throughout the investigation as well as provide copies of interim and final reports.

“We would be happy to provide a status update to the Subcommittee staff and provide a copy of our interim and final reports on the matter when they are issued,” the letter reads.


Oops. GOP knew about this investigation for 10 months.  They said nothing.

“I knew what was approximately in it when we made the allegations about a year ago. This is one of those things where it’s been, in a sense, an open secret, but you don’t accuse the IRS until you’ve had a nonpartisan, deep look,” Issa said. “That’s what the IG has done. That’s why the IGs in fact exist within government, is to find this kind of waste and fraud and abuse of power.”


And Issa immediately accuses the White House of a cover-up.  When Issa knew about the investigation.  You know, the opposite of an actual cover-up.   Over at Hot Air, Mary Katherine Ham has no choice but to move those goalposts again...

The fact that there was an investigation going on was on the IG website as of fall, 2012, according to the same Lew interview with Bloomberg today. “The heads-up that I got was something that was a matter of public knowledge. It was posted on the IG’s website in the fall of 2012,” Lew said. “I was not aware of any details. My deputy was not aware of any details until it became a matter of public knowledge.”


So now SecTreas Jack Lew is the target.  Keep on copulating with the poultry, guys.  President Obama's approval ratings have gone UP in the last week from 47% on May 14th to 51% on May 17th, according to Gallup.
Posted by Zandar Permalink 10:47:00 PM No comments:

The Bugs Are Back

Not cicadas, hornets.  Charlotte Hornets, that is.

The Bobcats have started pursuing a name change to Charlotte’s original NBA team, an informed source confirmed to the Observer. Though the Bobcats will need permission from the league to make such a change, incoming NBA commissioner Adam Silver has twice indicated that shouldn’t be a problem.

What’s still in question is when the name change could be implemented and how extensively the Bobcats would assume the Hornets’ old look. The source, who requested anonymity due to the sensitivity of the issue, would not comment on whether the popular teal-and-purple color scheme would return to Charlotte.


With New Orleans dropping the Hornets name to become the Pelicans next season,  it looks like the other half of that move is now on the table.  Growing up in NC with the Hornets as the first major pro sports team in the Carolinas, I'm glad to see this happening.

Now if Seattle can just get the SuperSonics back some day...

Knowingly reporting on this Obama umbrella nonsense as a serious news story should probably drive a real reporter out of the business altogether.  Sadly, Beltway hack Rachel Weiner at the Washington Post suffers from no such affliction of conscience or character.

“I am going to go ahead and ask folks, why don’t we get a couple of Marines — they’re going to look good next to us — just because I’ve got a change of suits but I don’t know about our prime minister,” he said as two Marines appeared at the lecterns with umbrellas. “There we go. That’s good.” He gestured to the soggy press corps, adding, “You guys I’m sorry about.”

It was a lighthearted moment in the midst of a grim few days for the White House. But in a week of Benghazi e-mails, Justice Department subpoenas and Internal Revenue Service targeting, some of the administration’s critics saw another example of overreach.

Per Marine Corps uniform regulations, the men are not allowed to carry or use umbrellas while in uniform. Female Marines can carry “an all-black, plain standard, or collapsible umbrella at their option during inclement weather” but not with combat uniforms.


Why is this even a story?   Why would the Village legitimize this baseless and stupid attack on the President?  I think I know... 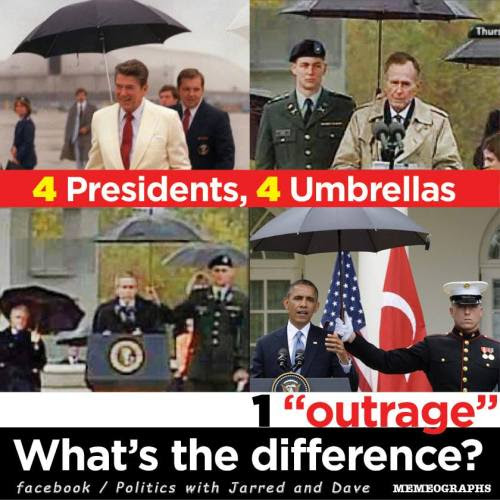 Posted by Zandar Permalink 8:00:00 AM No comments: