Remember folks that the economy was terrible, horrible, and miserable until January 20, 2017. 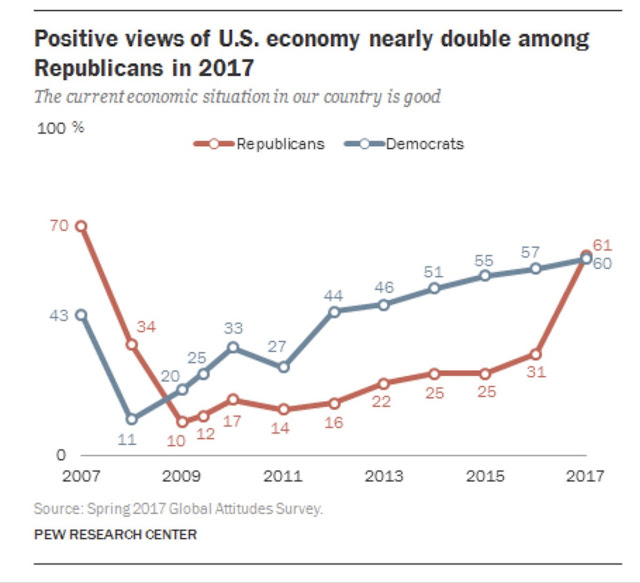 I guess economic anxiety only happens under Democratic presidents.  Especially black ones.
Posted by Zandar Permalink 9:16:00 PM No comments:

A Page Out Of Putin's Playbook

But the name we haven't heard too much of recently has been that of now-fired Trump campaign adviser and energy lobbyist Carter Page, who specialized in Russian oil deals.  Turns out that yes, Page's past is just as shady as the rest of Trump nested Russian dolls.

A former campaign adviser for Donald Trump met with and passed documents to a Russian intelligence operative in New York City in 2013.

The adviser, Carter Page, met with a Russian intelligence operative named Victor Podobnyy, who was later charged by the US government alongside two others for acting as unregistered agents of a foreign government. The charges, filed in January 2015, came after federal investigators busted a Russian spy ring that was seeking information on US sanctions as well as efforts to develop alternative energy. Page is an energy consultant.

A court filing by the US government contains a transcript of a recorded conversation in which Podobnyy speaks with one of the other men busted in the spy ring, Igor Sporyshev, about trying to recruit someone identified as “Male-1.” BuzzFeed News has confirmed that “Male-1” is Page.

The revelation of Page’s connection to Russian intelligence — which occurred more than three years before his association with Trump — is the most clearly documented contact to date between Russian intelligence and someone in Trump’s orbit. It comes as federal investigators probe whether Trump’s campaign-era associates — including Page — had any inappropriate contact with Russian officials or intelligence operatives during the course of the election. Page has volunteered to help Senate investigators in their inquiry.


So Page is turning states' evidence, which makes sense because he's largely seen as a smaller fish in this huge pond full of scum.

It remains unclear how connected Page was to the Trump campaign. He rose to prominence seemingly out of nowhere last summer, touted by then-candidate Trump as one of his foreign policy advisers. Page was quickly cut from the Trump team following reports that federal investigators were probing his ties to Russian officials. White House press secretary Sean Spicer said last month that the campaign had sent Page cease and desist letters last year, demanding he stop associating himself with it.

A US intelligence official said that investigators intend to question Page eventually, but that he was not considered a high priority. “There’s so many people that are more relevant,” the official said.


Boy are there ever.  Including, you know, just maybe the guy in the Oval Office.
Posted by Zandar Permalink 4:00:00 PM No comments:

The Black Waters Of Moscow

Hey kids, remember our old friend Erik Prince, founder of America's favorite private mercenary company Blackwater, who did Dubya's dirty work in Iraq and Afghanistan (and profited mightily from it)?  The guy whose sister Betsy married into the DeVos Amway empire and became Trump's Education Secretary?  Do you think that maybe Erik might have been, I dunno, possibly involved in all of Trump's nasty business in Russia?

The Washington Post's national security investigative reporting team sure as hell does!

The United Arab Emirates arranged a secret meeting in January between Blackwater founder Erik Prince and a Russian close to President Vladi­mir Putin as part of an apparent effort to establish a back-channel line of communication between Moscow and President-elect Donald Trump, according to U.S., European and Arab officials.

The meeting took place around Jan. 11 — nine days before Trump’s inauguration — in the Seychelles islands in the Indian Ocean, officials said. Though the full agenda remains unclear, the UAE agreed to broker the meeting in part to explore whether Russia could be persuaded to curtail its relationship with Iran, including in Syria, a Trump administration objective that would likely require major concessions to Moscow on U.S. sanctions.

Though Prince had no formal role with the Trump campaign or transition team, he presented himself as an unofficial envoy for Trump to high-ranking Emiratis involved in setting up his meeting with the Putin confidant, according to the officials, who did not identify the Russian.

Prince was an avid supporter of Trump who gave $250,000 last year to support the GOP nominee’s campaign, records show. He has ties to people in Trump’s circle, including Stephen K. Bannon, now serving as the president’s chief strategist and senior counselor. Prince’s sister Betsy DeVos serves as education secretary in the Trump administration. And Prince was seen in the Trump transition offices in New York in December.

U.S. officials said the FBI has been scrutinizing the Seychelles meeting as part of a broader probe of Russian interference in the 2016 U.S. election and alleged contacts between associates of Putin and Trump. The FBI declined to comment.


I mean Prince just happens to offer his "unique expertise in international relations" to Trump to grease the wheels with the Russians in a super-secret back channel January meeting with one of Putin's guys, after Trump nominates his sister for a cabinet position the month prior.  There's nothing suspicious about this at all, nope.

Please remember Trump screaming his head off to anyone who would listen that he had no contacts with the Russians at all, and it's all just an Obama conspiracy operation except oh yeah, Trump sent the mercenary founder of Blackwater and the sister of his Education Secretary to secretly meet with the goddamn Russians the week before Trump was sworn in, yeah he forgot to mention that. Oops!


The Seychelles encounter, which one official said spanned two days, adds to an expanding web of connections between Russia and Americans with ties to Trump — contacts that the White House has been reluctant to acknowledge or explain until they have been exposed by news organizations.

“We are not aware of any meetings and Erik Prince had no role in the transition,” said Sean Spicer, the White House press secretary.

“Erik had no role on the transition team. This is a complete fabrication,” said a spokesman for Prince in a statement. “The meeting had nothing to do with President Trump. Why is the so-called under-resourced intelligence community messing around with surveillance of American citizens when they should be hunting terrorists?”

Prince is best known as the founder of Blackwater, a security firm that became a symbol of U.S. abuses in Iraq after a series of incidents including one in 2007 in which the company’s guards were accused — and later criminally convicted — of killing civilians in a crowded Iraqi square. Prince sold the firm, which was subsequently rebranded, but has continued building a private paramilitary empire with contracts across the Middle East and Asia.

Prince would probably have been seen as too controversial to serve in any official capacity in the Trump transition or administration. But his ties to Trump advisers, experience with clandestine work and relationship with the royal leaders of the Emirates — where he moved in 2010 amid mounting legal problems for his American business — would have positioned him as an ideal go-between.


I mean I could not have sold this plot to Tom Clancy if *I* had given *him* a million bucks to write it, because he would have laughed me out of his office.

But there you are.  Prince is easily on the world's top 100 Actual Villain list and he's the go-between for Trump and Putin after Trump gets elected with Putin's help, so they can talk how to divvy up the spoils or something.  Like, this is the part where James Bond is hiding in the air ducts in the Seychelles hotel conference room getting all this on digital, only it's the FBI doing it for real.

Eat your heart out, America.
Posted by Zandar Permalink 10:00:00 AM No comments: