And they were pretty decent, with 213.000 new jobs added and the rate remaining at 6.3% unemployed.  Moreover, we finally reached the point where we have recovered all the jobs lost since the Bush recession began 76 months ago: 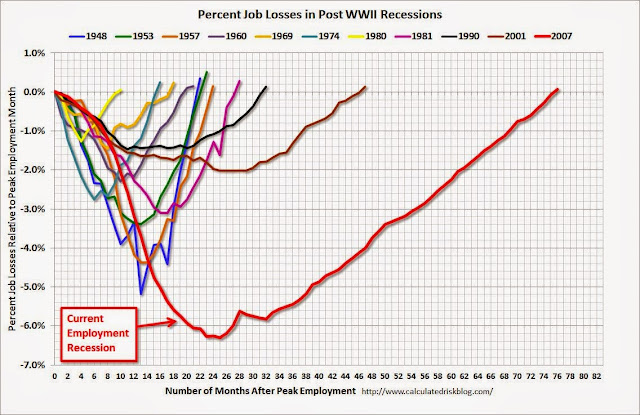 The bad news is that we would have had 7 million more jobs on top of all this if the GOP hadn't destroyed America's economy in Bush's second term.  But yes, America has added 13.5 million jobs in just over 4 years, cleaning up yet another GOP president's mess. 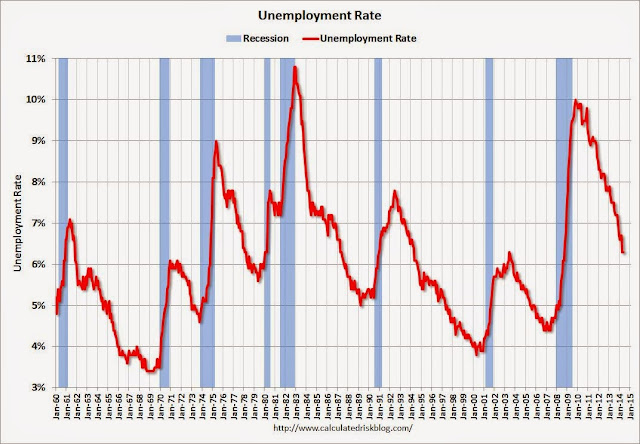 When Reagan and Poppy Bush took ten years to get the unemployment rate down to where Jimmy Carter had it (after cleaning up Nixon and Ford's disaster) at 5.6 %, AFTER DOUBLING IT TO 11% because Reagan was some sort of ECONOMIC GENIUS YOU KNOW, they were considered gods.

Obama cleans up an even worse mess in terms of jobs and he's considered the antichrist.

Today is the 70th anniversary of D-Day, the Allied invasion of Normandy, that began on June 6, 1944. Time has claimed nearly all of our WW II veterans from that day, they would be into their 90's now.  But not quite all of them are gone, and some of them are still parachuting into the French countryside.

Martin was part of the U.S. 101st Airborne Division that parachuted down over Utah Beach in their bid to retake France and, eventually, the rest of Europe from Nazi Germany. They actually touched down in enemy-controlled territory a night before what's referred to as D-Day.

His jump Thursday in the same area was different and -- despite his being 93 years old now -- a whole lot easier.

"It didn't (compare)," Martin said, "because there wasn't anybody shooting at me today."

As he told reporters afterward, "To tell you the truth, riding around in the plane is boring. It's when you get off the plane, that's when it gets exciting ... But there's no fear to it. It's just something you do."

Martin admitted that he was motivated by "a little bit of ego, (to show that) I'm 93 and I can still do it."

"And also I just want to show all the people that you don't have to sit and die just because you get old," he added. "Keep doing things."

Among those things he'd like to do is another jump in the same plane, one year from now.

"If I come back next year, I'll make a jump next year. You can bet on it."


There's a reason they're called the Greatest Generation, folks.  These Depression-era teens of the 30's turned into WW II heroes in the 40's, GI Bill and suburban parents of the 50's, saw the rise of civil rights in the 60's, the rise of feminism in the 70's, survived the Reagan 80's, the Clinton 90's, and the Bush aughts. They lived to see a black President, and they jump out of planes at age 93.

The Quest To Destroy Bowe Bergdahl

FOX News is now claiming that freed Afghan war POW Sgt. Bowe Bergdahl secretly converted to Islam and became a jihadi in 2010.  In other news, somebody at FOX News clearly watches too much Homeland on Showtime.


Citing "secret documents prepared on the basis of a purported eyewitness account," Fox's James Rosen wrote that Bergdahl had a roller-coaster experience after he was captured in 2009.

There were times, according to Rosen, when Bergdahl was "treated very much like a hostage," and other times the soldier bonded with his captors and was even allowed to carry a gun.

According to the report, Bergdahl managed to escape for five days at one point and. After he was re-captured, he was reportedly locked in a cage "like an animal."

The documents indicate that intelligence officials were aware of the conversion by August of 2012, at which time Bergdahl was describing himself as a "mujahid." He also apparently played soccer with his captors at the time and appeared "to be well and happy."

Proof?  Well...who cares.  This guy has to be destroyed because it hurts Obama, and that's the only thing that matters.

When's the last time you remember a POW in more danger back home from our own domestic terrorists than he was in when he was captured?
Posted by Zandar Permalink 10:00:00 AM No comments: