The Trump regime strongly opposes any measures to toughen up election interference defenses because the Trump regime knows full well that legislation like the Secure Elections Act would make it harder for them to hide what they're up to.


A bill that would have significantly bolstered the nation’s defenses against electoral interference has been held up in the Senate at the behest of the White House, which opposed the proposed legislation, according to congressional sources.

Sen. Roy Blunt, R-Mo., was set to conduct a markup of the bill on Wednesday morning in the Senate Rules Committee, which he chairs. The bill had widespread support, including from some of the committee’s Republican members, and was expected to come to a full Senate vote in October. But then the chairman’s mark, as the critical step is known, was canceled, and no explanation was given.

As it currently stands, the legislation would grant every state’s top election official security clearance to receive threat information. It would also formalize the practice of information-sharing between the federal government—in particular, the Department of Homeland Security—and states regarding threats to electoral infrastructure. A technical advisory board would establish best practices related to election cybersecurity. Perhaps most significantly, the law would mandate that every state conduct a statistically significant audit following a federal election. It would also incentivize the purchase of voting machines that leave a paper record of votes cast, as opposed to some all-electronic models that do not. This would signify a marked shift away from all-electronic voting, which was encouraged with the passage of the Help Americans Vote Act in 2002.

A paper record could prove effective against hackers if they tried to change the reporting of votes on the internet, as opposed to altering the votes themselves. Election officials needs to be able to say, “‘Nope, we can check this,’” as Lankford puts it. “Here’s the paper, here’s the machine, here’s our poll count.”


The Trump regime's official excuse is that election integrity matters are already under the Department of Homeland Security, and firmly protected by the executive branch, therefore there's no need to have Congress interfere with "the principles of Federalism".

But let's be honest: it's the audit of paper ballots that the Trump regime will never allow to happen.

We all know why that is.

Email ThisBlogThis!Share to TwitterShare to FacebookShare to Pinterest
StupidiTags(tm): Russia, Technology Stupidity, Trump Regime, Vote Like Your Country Depends On It, Voting Stupidity

Great Scott, Donald! It's Your Kids!

The Michael Cohen investigation has broken the dam on implicating not only Trump, but his companies and charities as well.  Remember that Cohen was Trump's personal lawyer for a very long time, and that includes being Trump's legal eagle behind all of his business ventures involving the Trump family.  It's these ventures, specifically Trump's charity outfit, the Trump Organization, that has caught the eye of NY state prosecutors in the wake of the Cohen plea.


The Manhattan district attorney’s office is considering pursuing criminal charges against the Trump Organization and two senior company officials in connection with Michael D. Cohen’s hush money payment to an adult film actress, according to two officials with knowledge of the matter.

A state investigation would center on how the company accounted for its reimbursement to Mr. Cohen for the $130,000 he paid to the actress, Stephanie Clifford, who has said she had an affair with President Trump, the officials said.

Both officials stressed that the office’s review of the matter is in its earliest stages and prosecutors have not yet made a decision on whether to proceed.

State charges against the company or its executives could be significant because Mr. Trump has talked about pardoning some of his current or former aides who have faced federal charges. As president, he has no power to pardon people and corporate entities convicted of state crimes.

The Trump Organization recorded the reimbursement as a legal expense. But Mr. Cohen, Mr. Trump’s longtime fixer, said on Tuesday that he paid Ms. Clifford, better known as Stormy Daniels, to buy her silence during the 2016 campaign. Federal prosecutors have said the reimbursement payments were for sham legal invoices in connection with a nonexistent retainer agreement. Mr. Cohen, who pleaded guilty to federal campaign finance charges, did no legal work in connection with the matter, prosecutors said.

“On its face, it certainly would be problematic,” said one of the officials familiar with the district attorney’s office review, noting that listing the reimbursement as a legal expense could be a felony under state law.


The billion-dollar questions are "who are the two senior company officials" and "will they be prosecuted", and the best part of all of this is that many of the Trump Organization's "senior company executives" are in fact Donald Trump's kids.

Wouldn't that be something?

Now, it's entirely possible that the two executives could be former Trump Organization executive VP Jason Greenblatt, who ran the outfit's day-to-day operations, and Trump Organization CFO Allen Weisselberg, who has been Trump's money guy for decades.  In a lot of ways, these two would actually be worse for Trump than his kids, because unlike Trump's useless and greedy kids, Greenblatt and Weisselberg actually know where all of the Trump money laundering bodies are buried.

But guess what happened this morning?

Allen Weisselberg, President Trump’s longtime financial gatekeeper, was granted immunity by federal prosecutors for providing information about Michael Cohen in the criminal investigation into hush-money payments for two women during the 2016 presidential campaign, according to people familiar with the matter.

Mr. Weisselberg was called to testify before a federal grand jury in the investigation earlier this year, The Wall Street Journal previously reported, citing people familiar with the investigation.

The decision by prosecutors in the Manhattan U.S. attorney’s office to grant immunity to Mr. Weisselberg escalates the pressure on Mr. Trump, whom Mr. Weisselberg has served for decades as executive vice president and chief financial officer of the Trump Organization. After Mr. Trump was elected, he handed control of his financial assets and business interests to his two adult sons and Mr. Weisselberg.

So if Weisselberg's not one of the two "senior company officials" in the Trump Organization that's facing prosecution, then who is?  The only reason he gets immunity is if he can provide information on a bigger fish.  Above Weisselberg, all the bigger fish are named "Trump".

It's open season, folks.  The Trumpies could argue that Cohen was only going down for the Stormy Daniels payouts and campaign and tax fraud.  But Weisselberg cutting a deal means he has direct information of immense value on a much larger crime.

Stay tuned.  I bet we find out what that crime is, and that it was committed by a Trump.
Posted by Zandar Permalink 4:00:00 PM No comments:

The End Of The Session(s)

If you're wondering what the congressional GOP response would be to this week's Michael Cohen/Paul Manafort bombshells, the answer is that Senate Republicans are signalling that they're fine with replacing Attorney General Jeff Sessions in favor of someone who will end the Mueller probe once and for all.


Two key Republican senators signaled to President Donald Trump that he could replace Attorney General Jeff Sessions after the midterm elections in November, a move that would open the way for firing Robert Mueller or constraining his probe into Russian meddling in the 2016 election.

“The president’s entitled to an attorney general he has faith in, somebody that’s qualified for the job, and I think there will come a time, sooner rather than later, where it will be time to have a new face and a fresh voice at the Department of Justice,” Senator Lindsey Graham of South Carolina, who may be in line to head the Judiciary Committee next year, told reporters Thursday. “Clearly, Attorney General Sessions doesn’t have the confidence of the president.”

Senator Chuck Grassley, the current Judiciary chairman, also changed his position on Thursday, saying in an interview that he’d be able to make time for hearings for a new attorney general after saying in the past that the panel was too busy to tackle that explosive possibility.

Several other Republicans rejected the idea of replacing the attorney general, while Sessions defended his performance in a statement Thursday. He said “we have had unprecedented success at effectuating the President’s agenda” and added, “While I am Attorney General, the actions of the Department of Justice will not be improperly influenced by political considerations.”

In warning against ousting Sessions before the election, Graham called that possibility “a nonstarter” that “would create havoc” with Senate efforts to confirm Trump’s Supreme Court nominee Brett Kavanaugh as well as with the midterm elections in November.

But his statement that such a move could come after the election represents a significant shift from Graham’s stance a year ago, when he warned Trump publicly that if he fired Sessions “there will be holy hell to pay.”


It's pretty clear what Graham and Grassley want: once Brett Kavanaugh has a lifetime appointment on the Supreme Court, it doesn't really matter what Trump does anymore as far as they're concerned.  Once Kavanaugh is sworn in, they'll have what they wanted: huge corporate tax cuts for the rich, two SCOTUS picks who will finish off the civil rights era for good, and an orange lightning rod to take all the blame.

It's all upside for them at this point.  Maybe getting rid of Sessions and firing Mueller is the excuse they need to bag him up and bring in Pence.  Maybe they're okay with him sticking around.  But once Kavanaugh is there, the damage becomes permanent and irreversible.  Trump will get free reign, because ultimately, it won't matter past that point.

Regardless, Jeff Sessions now must know that his time is up.  Trump may not be able to fire Sessions directly right now, but the point of the news that he's being shown the door after the elections may be to get him to resign now, which would be optimal for Trump, allowing him to go with a Saturday Night Massacre plan as soon as possible and get rid of Mueller almost immediately.

He may stick around to secure his legacy, he may have congressional Republicans whispering in his ear to go now before that legacy transforms into "the loser who failed to protect Dear Leader Trump" and he becomes GOP public enemy #1.  I don't know, honestly.

This morning, Trump went on a Twitter tirade that included this order for Sessions to investigate Trump's political opponents. 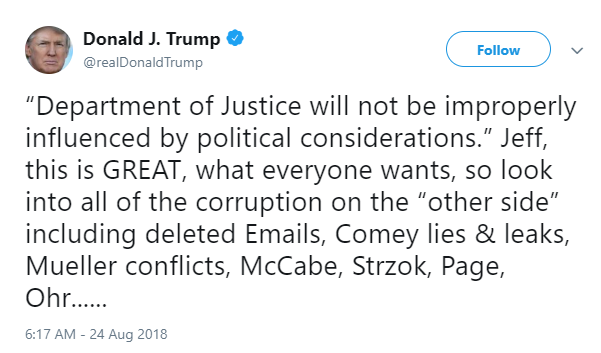 This is the real endgame now: Trump unleashed to indulge his autocratic impulses and the people who enabled him can walk away and rake in the spoils.  And should anyone try to stop him, well, it would be a shame if he let the white nationalist militias freely indulge their killing fantasies, wouldn't it?
Posted by Zandar Permalink 10:00:00 AM No comments: