Dr. Ben Carson should really stick with the doctor part (the man is a neurosurgeon after all) and leave the politics to the slightly less bonkers people.


Republican presidential candidate and tea party favorite Ben Carson said in an interview with Newsmax that the President of the United States doesn't have to follow the Supreme Court if the high court were to rule in favor of same-sex marriage.

"First of all, we have to understand how the Constitution works. The president is required to carry out the laws of the land, the laws of the land come from the legislative branch," Carson said on Tuesday. "So if the legislative branch creates a law or changes a law, the executive branch has a responsibly to carry it out. It doesn’t say they have the responsibility to carry out a judicial law. And that's something we need to talk about."

Carson's comments follow the Supreme Court in April beginning to hear arguments in Obergefell v. Hodges, which concerns bans on same-sex marriage in Kentucky, Ohio, Michigan, and Tennessee. The nine justices seemed to split along party lines in the early arguments. If the high court were to rule with the plaintiffs, gay marriage bans across the country could be wiped out in one single wave.


Which is weird, because when President Obama actually exercised his actual Constitutional executive order plans, the right went nuts and said it was illegal.  Now Carson is saying that as President, he will set up a Constitutional crisis in order to preserve wherever it is in the Constitution where straight people get to hate LGBTQ people.

Sure, this guy seems sane and all.  Let's elect him President.
Posted by Zandar Permalink 9:03:00 PM No comments:

White Out On The Blue Line

The Center for Public Integrity has a new study out this month that finds in 49 of the 50 largest cities in the US, police departments have a smaller percentage of African-American as police officers on the force than the share of African-Americans in the cities those officers serve.  The lone exception? Atlanta.

Those are just a few of the departments whose ethnic makeup is dramatically out of sync with the demographics of the cities they serve. Using census data, Chris Zubak-Skees of the Center for Public Integrity crunched the numbers for the nation's 50 most populous cities. In 49 of them—Atlanta being the lone exception—the cops are whiter than the community.

Zubak-Skees notes that police departments in many cities have worked hard to make themselves more diverse. Acting on recommendations by the 1968 Kerner Commission—which was appointed to investigate the causes of riots in Los Angeles, Chicago, Newark, and Detroit—many departments began reviewing fair promotion policies and recruiting African Americans. The numbers have improved somewhat over the years, but most big-city forces are still far from representative. The Kerner report warned that an "abrasive relationship between police and the minority communities has been a major—and explosive—source of grievance, tension, and disorder."


Is there any wonder still why there's a trust issue (not to mention the "us vs them" occupation mentality) when nearly all major police departments look nothing like the cities they are supposed to protect?

Besides Atlanta, the only other cities that are within even 5% of having the correct number of white officers on the force are Albuquerque and Seattle.

The city with the largest disparity?  Milwaukee.  The city is only 38% white, but white cops make up a whopping 70% of the Milwaukee PD. No surprise here that the worst thing to happen when a white cop shot and killed an unarmed black man in that city was that the cop was fired.

As Vox's Dylan Matthews reminds us, Rep. Paul Ryan's major problem with social programs and poverty begins with the realization that Ryan (and the GOP and much of the Village) gets the basic fact wrong on poverty.

It doesn't help that the first policy statement he makes is an out-and-out lie:

After a 50-year war on poverty and trillions of dollars spent, we still have the same poverty rates.


This sentence suggests that either Paul Ryan has absolutely no clue how poverty rates work, or he does know and is actively deceiving viewers. First of all, the specific claim in question isn't even technically accurate. The poverty rate was 19 percent in 1964, when the War on Poverty was announced. In 2013, it was 14.5 percent. We do not have the same poverty rates we did then. Ryan is just wrong.

But even that dramatically understates the progress that has been made. The official poverty rate is a travesty of a statistic, and using it at all in this context is irresponsible. It's literally based on food prices in 1955. But more relevantly for these purposes, it excludes the very anti-poverty programs Ryan is talking about. It excludes in-kind transfers like Medicaid, food stamps, and housing vouchers, as well as tax-based programs like the EITC. Blasting those programs because they don't show up in the poverty rate is like arguing that Netflix shows have zero viewers by pointing to cable ratings.


And Republicans have been throwing this accusation around for a couple of years now: that the War on Poverty has been a $12 trillion (or $18 trillion or $22 trillion, depending on who is telling the lie) waste of money that hasn't helped anyone in America.

That's just an out and out lie.


A much better metric, which takes anti-poverty programs fully into account and is based on more recent data, is known as the Supplemental Poverty Measure. The SPM factors in government programs, and is based on current data about spending on food and other necessities. It's the poverty rate people like Ryan should be referencing. While the federal government has only been using the SPM for a short while, a group of researchers centered at Columbia — Christopher Wimer, Liana Fox, Irv Garfinkel, Neeraj Kaushal, and Jane Waldfogel — went back and calculated SPM numbers for every year since 1967. To distinguish from the government-issued SPM metric, they call this "anchored SPM." 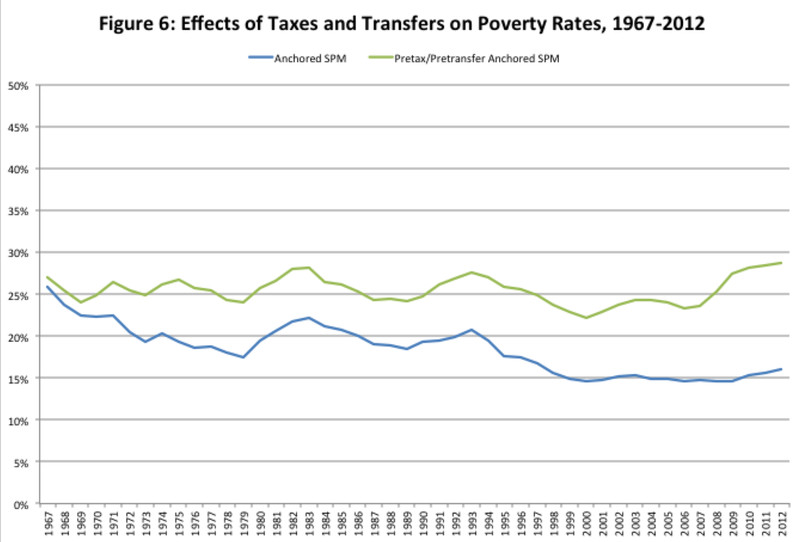 
"After accounting for taxes and transfers, poverty falls by approximately 40 percent, from 26 percent to 16 percent," write Wimer et al. Absent those programs, poverty actually would have increased slightly.


So yes, we've reduced poverty in this country by a lot.  We still have a long way to go however. And Paul Ryan and the GOP will completely reverse that progress and will add millions more into poverty once they get control of everything.

There is a difference between electing Republicans and Democrats, and fighting poverty versus massive austerity is just one major difference.
Posted by Zandar Permalink 10:00:00 AM No comments: