Trump thinks he has California right where he wants them, threatening to pull ICE out of the state and let it fend for itself.  Somehow I'm thinking the vast majority of Californians would be very cool with that.

President Donald Trump said Thursday he is considering pulling U.S. Immigration and Customs Enforcement officers from California, warning that the nation’s most populous state would turn into a “crime nest” without the federal agents.

Trump said heavily Democratic California, which gave Hillary Clinton a resounding victory in the 2016 presidential race, was “doing a lousy management job.” He pointed to “a disgrace, the sanctuary city situation” and lamented the “protection of these horrible criminals.”

The president’s comments were the latest effort by the Trump administration to pressure “sanctuary cities” to cooperate with federal immigration authorities.

The Justice Department has threatened to deny millions of dollars in federal grant money to communities that refuse to comply with a statute requiring information-sharing with federal law enforcement. It’s an essential part of Trump’s efforts to crack down on cities and states that refuse to help enforce U.S. immigration laws.

Trump issued the threat during a meeting with state and local officials on school safety and gun violence. He told Attorney General Jeff Sessions and others that his administration has targeted members of the violent MS-13 gang but has been “getting no help from the state of California.”

“Frankly, if I wanted to pull our people from California you would have a crime nest like you’ve never seen in California. All I’d have to do is say is, ‘ICE and Border Patrol, let California alone,’ you’d be inundated. You would see crime like nobody has ever seen crime in this country.”

He added: “If we ever pulled our ICE out, and we ever said, ‘Hey, let California alone, let them figure it out for themselves,’ in two months they’d be begging for us to come back. They would be begging. And you know what, I’m thinking about doing it.”

The White House did not immediately comment on the president’s suggestions.


I mean, let's dissect this.  First of all, Trump is 100% okay with making the people of California suffer if it makes them bend to his will.  That's not the act of a president, that's the act of a fascist dictator.  That's literally the approach Rodrigo Duterte is taking in the Philippines right now and 20,000 people have died at the hands of his paramilitary police squads selectively enforcing order against drug gangs.  If Trump's right, he's going to have the blood of thousands on his hands.

Second, I'm pretty sure California would be thrilled to have ICE go away for a while, which is the point.  The state would be very happy not to have to worry about feds coming in and grabbing undocumented folks willy-nilly. If California's right, Trump is going to look like a complete idiot (I know, what a stretch.)

Either way, this is a colossally bad idea for Trump, and I'm sure he's being talked out of this right now.

We know Rick Gates, the business partner (and now indicted co-conspirator) of Paul Manafort, has been shopping a plea deal since last week with Robert Mueller's office.  With yesterday's massive new indictments of money laundering, bank fraud and tax charges, it was only a matter of time before Gates came begging for a deal, as I said yesterday:

Both of these guys are in mucho trouble. Somebody's going to flip. These charges are enough to put a guy in prison for a very long time. And remember, there could be more sealed charges waiting. Manafort's money laundering venue of choice? The same Cypriot banks that Vlad Putin's guys hang out with.


Less than 24 hours after those charges against Manafort and Gates were revealed, it looks like Rick Gates has copped a plea and will sing like Nina Simone.

A former top adviser to Donald J. Trump’s presidential campaign indicted by the special counsel was expected to plead guilty as soon as Friday afternoon, according to two people familiar with his plea agreement, a move that signals he is cooperating with the investigation into Russia’s interference in the 2016 election.

The adviser, Rick Gates, is a longtime political consultant who once served as Mr. Trump’s deputy campaign chairman. The plea deal could be a significant development in the investigation — a sign that Mr. Gates plans to offer incriminating information against his longtime associate and the former campaign chairman, Paul Manafort, or other members of the Trump campaign in exchange for a lighter punishment.

The deal comes as the special counsel, Robert S. Mueller III, has been raising pressure on Mr. Gates and Mr. Manafort with dozens of new charges of money laundering and bank fraud that were unsealed on Thursday. Mr. Mueller first indicted both men in October, and both pleaded not guilty.

Mr. Gates’s primary concern has been protecting his family, both emotionally and financially, from the prospect of a drawn-out trial, according to a person familiar with his defense strategy who was not authorized to publicly discuss the case and spoke on the condition of anonymity.

If Mr. Manafort continues to fight the charges in a trial, testimony from Mr. Gates could give Mr. Mueller’s team a first-person account of the criminal conduct that is claimed in the indictments — a potential blow to Mr. Manafort’s defense strategy.

It was unclear exactly what Mr. Gates might have to offer the special counsel’s team, whether about Mr. Manafort or about other members of the Trump campaign. Neither indictment indicated that either Mr. Gates or Mr. Manafort had information about the central question of Mr. Mueller’s investigation — whether President Trump or his aides coordinated with the Russian government’s efforts to disrupt the 2016 election.

But Mr. Gates was present for the most significant periods of activity of the campaign, as Mr. Trump began developing policy positions and his digital operation engaged with millions of voters on platforms such as Facebook. Even after Mr. Manafort was fired by Mr. Trump in August 2016, Mr. Gates remained on in a different role, as a liaison between the campaign and the Republican National Committee. He traveled aboard the Trump plane through Election Day.


Gates flips on Manafort, Manafort then flips on bigger fish like Jared Kushner or maybe even Trump himself.  Mueller knows what he's doing, believe this.  Again, Gates pleading makes it clear where this investigation is heading, as he will plead guilty to several charges, including conspiracy against the United States of America. 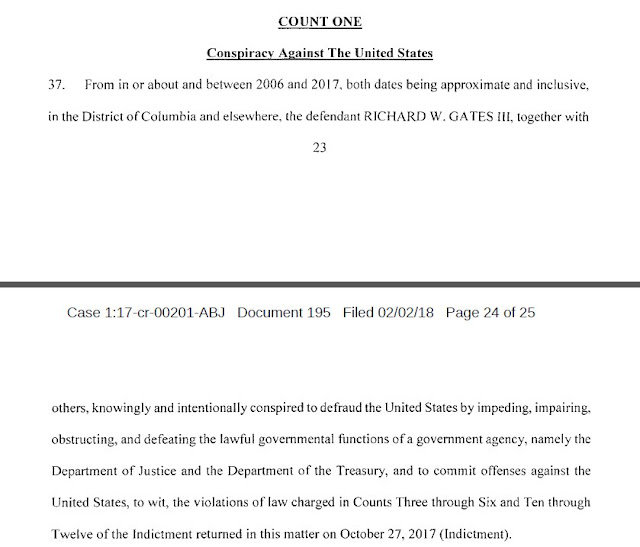 Could all this be derailed by a Trump pardon?  I think Mueller has made arrangements for that as well, particularly with NY state AG Eric Schniederman.  Remember, Trump can't pardon state offenses, only federal ones (and even then there are consequences).

We'll see where this goes from here, but Mueller just took another step closer to Trump.

And Trump knows it.
Posted by Zandar Permalink 4:00:00 PM No comments:

Now Greitens has been indicted on felony charges under Missouri law as the result of the investigation.

Missouri Gov. Eric Greitens, who was swept into office in 2016 with a vow to clean up a corrupt state government, was indicted and booked Thursday on a felony invasion of privacy charge for allegedly taking and transmitting a non-consensual photo of his partly-nude lover shortly before that campaign started.

It stems from a scandal that broke last month, in which Greitens was accused of threatening his lover with the photo — an allegation that isn't mentioned in the indictment. Greitens has admitted having an extramarital affair, but has denied the rest.

St. Louis Circuit Attorney Kimberly M. Gardner's office announced the indictment Thursday afternoon. A Post-Dispatch reporter saw Greitens being led down a hallway by several St. Louis city deputies on the first floor of the Carnahan Courthouse in downtown St. Louis at about 3:45 p.m. Officials later confirmed Greitens had been taken into custody and then booked at the St. Louis Justice Center.

Greitens, a Republican, declared his innocence in a written statement, and alleged the indictment is a "misguided political decision" by a "reckless liberal prosecutor." Gardner is a Democrat.

Greitens' legal team immediately filed a motion to dismiss the indictment, on grounds that any activity Greitens engaged in was "consensual."

Judge Rex M. Burlison allowed Greitens' release on a personal recognizance bond that permits him to travel freely throughout the United States. Greitens was scheduled to travel to Washington this weekend for an annual meeting of the nation’s governors. But Elena Waskey, spokesperson for the National Governors Association, said late Thursday that Greitens informed the organization that he would not be attending.

Online court records indicate Greitens is due back in court on March 16.

In recent weeks it appeared Greitens had weathered the worst of the scandal, but as news of the indictment spread Thursday, it became clear his political future is again in jeopardy.

A joint statement by top legislative Republicans, including Speaker of the House Todd Richardson, said they will appoint a group of legislators to investigate the charges: “We will carefully examine the facts contained in the indictment and answer the question as to whether or not the governor can lead our state while a felony case moves forward." Any impeachment proceedings would begin in the House.

Gardner, in her statement announcing the indictment, said the grand jury found probable cause to believe Greitens violated a Missouri statute that makes it a felony to transmit a non-consensual image showing nudity in a manner that allows access to that image via a computer.

"As I have stated before, it is essential for residents of the city of St. Louis and our state to have confidence in their leaders," Gardner said in the statement.


We'll see what happens.  Greitens was considered a rising star in the GOP, a charismatic, relatively young former Navy SEAL with no political experience, who publicly turned his back on the Democratic party and attacked President Obama after attending the 2008 Democratic National Convention and being recruited in 2010 to run against Missouri GOP Sen. Roy Blunt as one of the promising young veterans that the Democrats were trying to recruit to win in the Midwest.

Greitens was carried into office by the MAGA movement getting a million and a half votes. Now?  People are a bit less happy with him, and once again the calls to resign are strong.  Couldn't have happened to a more deserving guy if you ask me.

He's been able to dodge calls to resign and remain in office so far, but a felony indictment is the kind of thing that ends a career in prison.

Email ThisBlogThis!Share to TwitterShare to FacebookShare to Pinterest
StupidiTags(tm): Criminal Stupidity, GOP Stupidity, Someone Get Me Olivia Pope On The Line, War On Women, Wingnut Stupidity