In the wake of the GOP corporate tax cut giveaway passed last December, red states are moving to make their own laws even more generous to "job creators" to make sure that no corporation ever has to actually go through the tragedy of paying corporate taxes, and Georgia is no different as the state is working on a tax bill that will give airline giant Delta billions in state money.

That was of course until Delta made the even bigger cardinal sin of Thou Shalt Not Piss Off The NRA, which has now led the state's GOP Lt. Governor and GOP leaders of the Georgia State Senate vow to kill any legislation that would benefit Delta until it capitulates to the holy gun.

The lieutenant governor in Georgia threatened on Monday to kill a proposed lucrative tax cut for Delta Air Lines after the company eliminated a discount fare program for the National Rifle Association over the weekend.

The move by Lt. Gov. Casey Cagle, who presides over the State Senate, immediately put the legislation in jeopardy and put him at loggerheads with other top state officials, including the governor, who had championed the tax deal. The showdown between one of Georgia’s most powerful politicians and one of the state’s largest employers was the latest clash in a national debate around guns after the deadly school shooting in Florida this month.

Mr. Cagle, a Republican, fired the salvo at Delta on Twitter on Monday afternoon, saying that the Atlanta-based company must restore its program with the N.R.A. “Corporations cannot attack conservatives and expect us not to fight back,” Mr. Cagle, who had expressed his support for the bill earlier this month, said on Twitter.

Mr. Cagle, who received an A+ grade by the N.R.A. when he was running for his position in 2006, did not return a call seeking comment on Monday evening. As the Senate president, Mr. Cagle wields significant influence over legislation and how it flows through the Senate, where Republicans hold a 37 to 19 majority over Democrats.

A spokeswoman for Gov. Nathan Deal, who had said the tax bill was necessary to encourage airlines to open direct routes from Georgia to destinations around the world, did not return an email seeking comment.

Other Republicans in the State Legislature also on Monday pulled back their support for the bill, which would grant a $50 million sales tax exemption on jet fuel, primarily benefiting Delta. Among the new critics was the House speaker, David Ralston, who said on Monday that he was disappointed with Delta and wished it had announced the decision before the House approved the tax bill on Thursday. The legislation moved the next day to the Senate, where it seemed to have broad support.

But on Saturday, that support all but evaporated after Delta announced it had eliminated a discount fare program for travelers to attend the N.R.A.’s 2018 annual meeting in May. The airline, which had come under growing pressure from its customers and others to cut ties with the gun group, said its decision “reflects the airline’s neutral status in the current national debate over gun control amid recent school shootings.”

Delta said in a statement on Saturday that it supported the Second Amendment but has refrained from political issues before. The airline noted that it withdrew financial support of a New York production of “Julius Caesar” last summer because it depicted the assassination of a Trump-like Roman ruler.


It's interesting that the GOP stance is "we will openly and publicly punish companies that do not take our political positions".  Considering a dozen major corporations have cut ties with the NRA since the Parkland shooting on Valentine's Day, it's only now that suddenly Republicans are against corporate tax breaks for giant corporations, especially when it can be used to compel them to support Republican policies.

It used to be under the table, or in smoke-filled back rooms that deals like this were made, but in the Trump era, we now have public social media fights over which companies will be allowed to benefit from the taxpayer trough for supporting the regime in power, and which will be punished for not sufficiently doing so.

And the right happily applauds this.

In the end, it always comes down to authoritarianism with these guys.  Play ball or else.

Who could have known that the "demise" of the Democrats' generic ballot lead in January was nowhere near reality now that the dust has settled on Trump's tax scam bill and Republicans have reverted to form on putting guns everywhere?

Democrats once again hold a wide advantage in a generic congressional matchup, according to a new CNN poll conducted by SSRS, backed by a base of supporters who are more enthusiastic than Republican partisans and more motivated by core issues.

The poll finds 54% of registered voters say they back a Democrat in their congressional district, 38% say they back a Republican. That's a shift in favor of the Democrats since January, bringing their advantage in a hypothetical generic matchup to about the same level as early 2006, a year in which the party won control of both the House and the Senate.

This also mirrors their advantage on the question last fall, before a January full of good economic news brought a shift toward more positive numbers for both President Donald Trump and his party. The same poll also found Trump's approval rating declining -- a metric that's frequently closely tied to his party's performance in a midterm election year.
Democrats and Democratic-leaning independents remain more enthusiastic about voting this fall than Republicans and Republican-leaners. Overall, 51% of that Democratic base say they are extremely or very enthusiastic about voting in November compared with 41% of the Republican base.

The poll also suggests that the issues on which Republicans have largely pinned their electoral hopes -- the economy, taxes and immigration -- are carrying less weight with voters than are health care and gun policy -- two issues where the Democrats typically have stronger backing from the public overall.

Health care and gun policy are deemed deeply important by about half of voters (53% and 49%, respectively, call them extremely important), while about four in 10 say they are as motivated by the economy (43%) and immigration (38%). Sexual harassment is a sharp motivator for 36% of voters. Taxes, an issue Republicans have said will move voters as they realize the benefits of the tax changes passed last year, is extremely important for 35%. The investigation into Russian meddling in the 2016 election rounds out the list, with just about a quarter (26%) calling that extremely important to their vote.


That's a big reason there why the Democrats are suddenly back into a comfortable double-digit lead: gun policy matters to voters this time around.  Whether it will still matter in November is a major question, but for now America has been reminded again why the Republicans are so bad at governance. 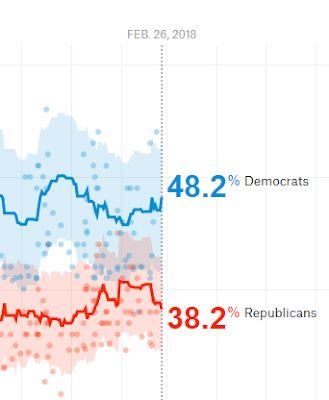 We'll see, but it definitely appears that the slide Democrats were on in January has definitively ended as we head into March.

Here's the bad, bad news for the GOP from that CNN poll though:

And that includes a  31% to 20% margin that gun-owner households are less likely to vote for an NRA-backed candidate now.

Like the #MeToo movement and tolerance for sexual harassment, something has fundamentally changed with gun control in America in the Trump era, and November could be even worse for the GOP than people think.
Posted by Zandar Permalink 4:00:00 PM No comments:

Kentucky GOP Gov. Mat Bevin has given up on trying to stop school shootings so we really shouldn't even bother trying or something, it's all very tragic but what can you do, right?

There is no immediate solution to improve school safety, Bevin said in remarks similar to those from other Republicans who question limits on assault weapons or other gun restrictions after the mass school shootings in Florida and Kentucky. Nineteen students died, dozens more were injured in the shootings that occurred within weeks of each other.

“It’s just a matter of time before somebody will breach whatever security measure is put in place,” said Bevin in the interview on NPR’s Morning Edition, “If someone truly wants to perpetrate evil, it has always been able to be done. It’s a sad and tragic reality.”
Lawmakers have to be serious and open-minded about school safety to determine evil’s root cause.

Asked whether it should be harder to obtain a weapon that can kill a large number of people, Bevin said assuming that is a solution is “naive and premature.”

While host Steve Inskeep said the amount of guns per capita has nearly doubled in the last 40 years, Bevin argued the availability of guns is not necessarily higher.

“There have always been a lot of guns per person, and the access to them by children with no restrictions, no rules (and) no laws has long existed,” he said. “But yet children did not go to school and kill other children.”


I'm quite tired of Bevin embarrassing the state with his staggering ignorance and look forward to voting him out of office next year.   We have to be "open-minded" about stopping school shootings, but apparently nothing actually involves Kentucky Republicans in the state legislature actually doing anything about it, just bleating platitudes about "evil will find a way" and shrugging it off.

I use the phrase "emotionally cauterized" to describe Trump a lot when he's actually empathetically cauterized, he's emotional, it's just the only emotions that matter are his own.  Bevin on the other hand really is emotionally void in the center, there's nothing there.

This is the kind of lousy argument Republicans made 20 years ago about gun control, and it led to the rise of "superpredator" theory and incarcerating black and brown kids.  Why he's dragging it up now, I have no idea.  The libertarian "Molon Labe" argument is much more chic these days.

Both remain terrible copouts thought.
Posted by Zandar Permalink 10:00:00 AM No comments: