Even Google realizes that investing in affordable housing in the Bay Area is a necessity or workers will be completely priced out of their campus.


Google is committing $1 billion to try to provide more affordable housing in the San Francisco Bay Area, where big tech firms have been blamed for putting home prices out of reach for anyone without a rich stock-option plan. Google says the money should result in 20,000 new homes added to the local market, over 10 years.

"We hope this plays a role in addressing the chronic shortage of affordable housing options for long-time middle and low income residents," Google CEO Sundar Pichai said in a statement unveiling the plan Tuesday.

As Google and other big tech companies have thrived, many people have struggled to find housing in the region or have been forced into lengthy commutes — 90 miles in at least one case.

People earning $100,000 can afford to live in only 28 percent of the Bay Area's neighborhoods, member station KQED reported last month, based on a review of housing costs and median rent rates. And a study published in April found that the Bay Area had the third-largest population of people experiencing homelessness in the U.S.

Google's announcement comes one week after Mountain View's city council postponed a move to ban RVs from parking overnight on the city's streets — a phenomenon that made headlines last month when reports emerged that hundreds of people were living in RVs to escape high rents.

As Bloomberg reported in May, RVs and vans line the streets of some neighborhoods. Some of the people who live in them have been in the area for decades; others are lower-paid Google workers who can't afford to pay the rent on an apartment close to their jobs.


The problem is nobody already living in Silly Valley wants affordable housing, especially multi-family housing, because that means those people will move in and crash property values.  The NIMBY factor for affordable housing on the West Coast is off the charts.

Google is helping at least, but the real problem is zoning.  And zoning won't change because politicians who do re-zone will be slaughtered at the polls.

Here's the thing though, housing markets eventually crash.  When it happens in the Bay Area, watch out.
Posted by Zandar Permalink 9:13:00 PM No comments:

California Democratic Congresswoman Katie Porter lays out the case for impeachment in a really helpful PDF as she is the latest House Democrat to call for an impeachment inquiry to begin.


Freshman U.S. Rep. Katie Porter on Monday threw her support behind an impeachment investigation of President Donald Trump, adding another Democratic lawmaker to those clamoring for the move.

The congresswoman from Irvine, California, announced her decision in a video statement. About 60 other lawmakers support opening an inquiry, a far cry from a majority in the 435-seat House.

Porter said she believes Congress must investigate after special counsel Robert Mueller said he couldn't exonerate Trump of obstruction of justice in a probe into Russian interference in the 2016 election and didn't have the option to indict a sitting president.

"I cannot with a clean conscience ignore my duty to defend the Constitution. I can't claim to be committed to rooting out corruption and putting people over politics and then not apply those same principles and standards in all of the work I do," Porter said.

She called out the administration for ignoring subpoenas and directing officials to disregard summons to testify before Congress.

"The administration has refused to respect the rule of law," Porter said. "The question is not whether a crisis is in our midst but rather whether we choose to fight against it."

Porter, a consumer protection lawyer and law professor at the University of California, Irvine, was elected last year in one of several contested races that put all the traditionally Republican districts in Orange County under Democratic control amid Trump's low approval ratings.

But Republicans still outnumber Democrats in her district covering a swath of eastern Orange County and hold a slight edge in the county as a whole. Porter already has a number of Republican challengers seeking her seat in 2020.

Fred Whitaker, chairman of the Orange County Republican Party, called Porter "too far left" for her district and "out of touch."


Whitaker's argument is actually pretty sound.  She does not have the support from Nancy Pelosi, because Nancy Pelosi does not believe the case has been made to the American public in order to begin an impeachment inquiry.  Pelosi has made it clear that there has to be a sea change in public opinion before she will commit to such a move.

I can see Pelosi's point.  Democrats only get one shot at this, and right now Trump has all but promised that he will absolutely have us in a shooting war with Iran, deep into a massive ICE deportation pogrom, or indicting FBI investigators who dared to look into his malfeasance (or a combination of all three) as soon as Pelosi makes her move.  And let's face it, Mitch McConnell will never allow a real vote to remove Trump.  A Senate trial will be a voice vote, Democrats will complain all they want to, but it will be over in a day.

Having said that, removing Trump at the ballot box is also going to be problematic.

Again, I don't honestly have the answers here.  But Rep. Porter does a good job of laying out the case as to why Trump should be impeached, and it's worth having that PDF on hand.
Posted by Zandar Permalink 4:00:00 PM No comments:

If you've ever wondered what would happen if a fascist regime had social media, the answer is "announce mass police action against millions on Twitter" on a random Monday night.


President Trump said in a tweet Monday night that U.S. immigration agents are planning to make mass arrests starting “next week,” an apparent reference to a plan in preparation for months that aims to round up thousands of migrant parents and children in a blitz operation across major U.S. cities.

“Next week ICE will begin the process of removing the millions of illegal aliens who have illicitly found their way into the United States,” Trump wrote, referring to U.S. Immigration and Customs Enforcement. “They will be removed as fast as they come in.”

Large-scale ICE enforcement operations are typically kept secret to avoid tipping off targets. In 2018, Trump and other senior officials threatened the mayor of Oakland, Calif., with criminal prosecution for alerting city residents that immigration raids were in the works.

Trump and his senior immigration adviser, Stephen Miller, have been prodding Homeland Security officials to arrest and remove thousands of family members whose deportation orders were expedited by the Justice Department this year as part of a plan known as the “rocket docket.”

In April, acting ICE director Ronald Vitiello and Homeland Security Secretary Kirstjen Nielsen were ousted after they hesitated to go forward with the plan, expressing concerns about its preparation, effectiveness and the risk of public outrage from images of migrant children being taken into custody or separated from their families. 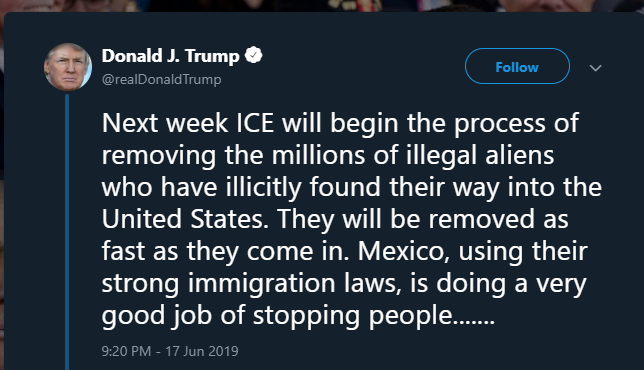 Seriously, I've been warning about Trump's upcoming mass deportation regime as his key to 2020 victory for months, if not years now, and the reality is the only thing we were waiting on was the logistics.  They're in place now, the jackbooted thugs, the concentration camps, and the big ugly is coming.

I'd say something pithy like "Well this is as close to ethnic cleansing as America gets" except even a cursory glance at US history involving the federal government's treatment of Native Americans, black slaves and freemen, Chinese immigrants, and Japanese-Americans interred puts lie to that, so much so that we're just returning to form as a nation.

Things are bad now.  They are about to get significantly worse.
Posted by Zandar Permalink 10:00:00 AM No comments: