Texas is not only refusing to back down from the ridiculously unconstitutional notion that it can deny settlement of Syrian refugees in the state, it's now threatening non-profit refugee organizations with lawsuits if they go ahead with any existing plans to settle Syrian refugees in Texas.


Texas officials are escalating their opposition to Syrian refugees with a new message aimed specifically at resettlement groups that have indicated they will accept people fleeing the war-torn country: change your mind or risk getting sued by the state.

Texas health commissioner Chris Traylor issued the first lawsuit threat over the Thanksgiving holiday weekend in a letter to the Dallas branch of the International Rescue Committee, which said earlier this month that it supports accepting Syrian refugees.

"We have been unable to achieve cooperation with your agency," Traylor wrote in the letter, which was released to the Houston Chronicle late Sunday, adding that, "Failure by your organization to cooperate with the State of Texas as required by federal law may result in the termination of your contract with the state and other legal action."


It's ridiculous and unconstitutional to the point of laughability.  If states could arbitrarily decide that it can exclude people of a certain ethnic status from living in the state and that they can sue organizations that help people settle there, then who knows where that will end.

Bee Moorhead, executive director of Texas Impact, a faith-based organization that has ties to refugee groups and has expressed concern about Abbott's position, decried the letter in an interview with the Chronicle.

"This letter should raise serious concerns for refugees currently receiving assistance in Texas, and also for legislators - who should be asking what fiscal impact the Texas Health and Human Services Commission could be bringing down on the state through its increasingly contentious communications," Moorhead said. "The health commission interacts collegially and effectively every day with multiple federal agencies, so it's astonishing to see these kinds of communications coming from the agency."

Legal experts largely have agreed that states cannot unilaterally block refugees from a specific country because federal law takes precedence over state law on immigration matters. The experts say the federal government can simply work directly with local resettlement groups to place Syrians with them.

Abbott, a constitutional lawyer and former Texas State Supreme Court justice, has insisted he has the authority, citing a provision in federal law that requires refugee resettlement groups to "cooperate" with state officials.

The letter marks another escalation in a political battle just days after federal officials formally told refugee resettlement groups in Texas and elsewhere that President Barack Obama's administration does not believe that governors can block refugees.


Gov. Abbott it seems won't take no for an answer.
Posted by Zandar Permalink 9:37:00 PM No comments:

Ezra Klein crunches the numbers over at Vox and comes up with a chart that shows the more money you make, the more likely you are to vote. 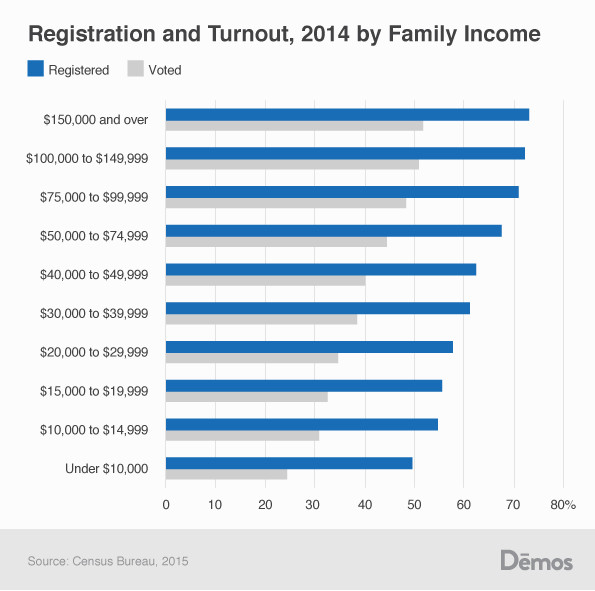 But they don't, so right now a majority of states are controlled by the GOP completely, and they have partial control over another dozen and change.

Poor people don't vote.  Hence, Voter ID laws.  This was a problem before, in 2016 it could cost us everything.
Posted by Zandar Permalink 4:00:00 PM No comments:

Email ThisBlogThis!Share to TwitterShare to FacebookShare to Pinterest
StupidiTags(tm): Economic Stupidity, Vote Like Your Country Depends On It, Voting Stupidity

Meanwhile, Back At The Ranch

Mitch The Turtle is pressing on with his plan to try to repeal Obamacare for the billionth time because the Senate apparently has nothing better to work on.

Senate Majority Leader Mitch McConnell (R-Ky.) is convening the meeting to walk through the special budgetary process known as reconciliation, which will allow Republicans to pass the package with a simple-majority vote.Controversial legislation usually must overcome a 60-vote threshold.

But McConnell may not even have 51 votes because several GOP moderates don’t like an added provision defunding Planned Parenthood — and several conservatives think the core bill doesn’t go far enough to repeal ObamaCare.

“We’re regrouping with the expectation that we're moving this week on it,” said a Senate GOP aide, who described the meeting as, “a final get-together to find out where we are so we can move with ObamaCare repeal.”

If all goes well at the special meeting, scheduled after a 5:30 p.m. vote, the Senate is likely to vote Wednesday on a motion to proceed to the package.

That vote would be followed by 20 hours of debate and then a succession of votes on amendments and final passage — a so-called vote-a-rama —on Thursday.


And it'll get vetoed...if it even passes, which it very well may not.  Over in the House, where a government shutdown looms in less than two weeks, who knows what will be added to must-pass budget legislation...

House Majority Leader Kevin McCarthy (R-Calif.) on Monday predicted that a fierce fight over Planned Parenthood funding would not lead to a government shutdown next month.

For months, conservatives in his conference have been threatening to attach language to an omnibus funding bill that would defund the healthcare provider, a move sure to lead to a confrontation with President Obama and Democrats.But McCarthy suggested that Congress’s focus has shifted from Planned Parenthood to national security in the wake of the deadly Nov. 13 terrorist attacks in Paris.

“I do not hear people shutting the government down over it right now,” McCarthy told reporters when asked about efforts to strip federal funding from Planned Parenthood. “I think security is becoming the top issue, especially [in] the last two weeks.”

McCarthy, who controls the floor schedule, said he expects the House to pass the omnibus spending bill by Dec. 11, when money for the federal government is scheduled to run out. But he also noted that Congress is supposed to be in session through Dec. 18, giving lawmakers an extra week to pass a spending bill before leaving town for the holidays.

While he tamped down talk of a shutdown, McCarthy said there would be no shortage of votes on policy amendments to the spending bill, though he declined to identify what those riders might be.

“For someone to say there’s not going to be riders ... how do you write a bill that’s not a continuing resolution that doesn’t have riders?” McCarthy asked. “I think that is just political banter that the minority party wants to play.


So get ready, folks.  The odds of a "clean" bill are nil and odds of a shutdown remain pretty high.  Remember, it took John Boehner resigning in failure from Congress to buy just a couple of months.
Posted by Zandar Permalink 10:00:00 AM No comments: