Last Call For The Future Of Open Carry America

Expect more confrontations like this one last month in Kalamazoo, Michigan between police and open carry advocates exercising their Second Amendment rights all over the place.


Police reports and recordings of a sometimes tense 40-minute encounter with a belligerent, rifle-toting man offers insight into how officers tried to diffuse a volatile situation without infringing on his right to openly the gun on a city street.

On May 4, Kalamazoo Department of Public Safety officers responded to multiple reports of a man, possibly intoxicated, carrying a rifle along East Cork Street in the city's Milwood neighborhood. Joseph Houseman, 63, was eventually persuaded to hand over the gun, which was returned to him the next day. Police considered but ultimately decided against seeking a misdemeanor charge of brandishing a firearm.

It is legal to openly carry a gun in Michigan but illegal to brandish one, which KDPS Assistant Chief Donald Webster described as essentially “waving or displaying the firearm in a threatening manner.”

Police reports and recordings from dash-mounted cameras in patrol cars and body microphones on officers, obtained by the Kalamazoo Gazette through the Michigan Freedom of Information Act, reveal how officers deliberated over how to enforce the law and protect public safety while respecting the man’s right to bear arms.


So police spent 40 minutes arguing open carry laws with a guy with a rifle walking down the street, which thanks to the NRA it's okay to do.  Still had three people call he cops on him, and he decided to screw with the cops.  The fellow with the rifle, Joe Houseman, makes a nuisance of himself long enough for a police lieutenant, Stacey Geik, to get involved:

Geik tells Houseman he can have his gun back if he submits to a breathalyzer test. He declines. Geik says his hostile behavior and 911 calls suggest he may be intoxicated, and therefore may not be legally allowed to carry a firearm.

In Michigan, a person openly carrying a firearm can be charged with being in possession of a firearm while intoxicated if found to have a blood alcohol content of .08 percent or more or if they appear to be visibly impaired. A person licensed to carry a concealed weapon can have a weapon confiscated and potentially lose their license if they have a BAC of .02 or higher.

Geik later notes in his report that Houseman was found to be a CCW license holder, but that didn't factor in to this encounter.

Geik offers to allow Houseman to walk home and retrieve his rifle the following day, or to drive him home and continue the discussion there. Houseman declines both offers.


The conversation included this:

Geik: But you're not stable mentally, which now takes you away from that rifle.

Houseman: I'm not stable mentally? How do you decide that?

Geik: You're damn right. How did this happen with open carry? What are you supposed to do when you contact law enforcement? Do you say, 'I hate you mother(expletive), (expletive) you? I hate you, there's a revolution coming.' Do you say that? Is that what you're taught?

Houseman: It was wrong of me.


So eventually Geik talks the guy down and Houseman gets his rifle back the next day.  But you can imagine why cops must loathe these open carry displays.  Here we have a guy, possibly drunk, stomping around with a rifle near a public business, being a jackass.  The law says he can do it, but would you want this guy around you?  Is that even remotely safe?

Oh, last thing, Houseman is a white guy.  Can you imagine a black man or a brown guy in a turban with a rifle walking around screaming how he hated cops and that there was a revolution coming?  They wouldn't be able to put bullets in him fast enough.

And the best part is we all get to look forward to this more and more.

Pretending The House Is Competitive

Gallup's midterm poll finds congressional approval at new lows, to the surprise of nobody. 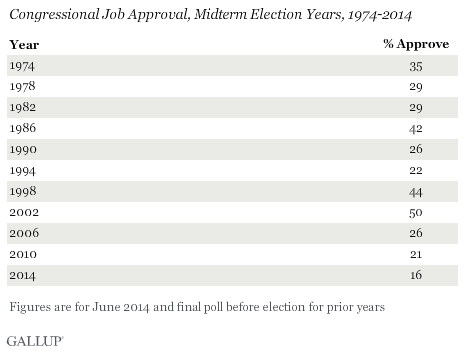 The potential vulnerability of congressional incumbents was clear last week, when House Majority Leader Eric Cantor suffered a stunning defeat in his primary election in Virginia, losing to an underfunded GOP "outsider."


If anything, Cantor's loss is the exception that proves the rule.  The difference between now and 1994 is that House districts are gerrymandered in just about as many states as possible.  There's no bigger example than in Ohio, a state that President Obama won by 3 points and nearly 200,000 votes, and yet 12 of 16 Ohio House Representatives are Republican, along with the GOP having 60 of 99 state House seats and 23 of 33 state Senate seats.  Ohio is by that measure one of the reddest states in the country.

If you think that somehow the House is in play, you're nuts.  In 2012 only 5% or so of House seats were competitive.  The number may actually be less this year.

The days of one side or another picking up 60+ seats like even four years ago are ancient history now that Republicans have gerrymandered the country to within an inch of its life, and the Supreme Court is too busy calling that free speech.
Posted by Zandar Permalink 4:00:00 PM 1 comment:

Some people make great parents, they raise and love their kids and teach them to be caring, intelligent people who want to make a difference.

And then there's Megan Everett of Florida, who is precisely none of those things.

Last April, Broward Circuit Judge Steven Feren granted dual custody of Lilly Everett to Megan Everett and Robert Baumann. On May 6, Baumann dropped his daughter off at her mother’s house for a week-long visit, but when he returned to the home, Everett was not there.

Baumann did find a note, however, that read “You are a great dad” — with the word “great” underlined multiple times — but “if I let them take her and vaccinate her and brainwash her, I wouldn’t be doing what’s right. I cannot let a judge tell me how my daughter should be raised. We will miss you. But I had to leave.”

On May 19, Broward Circuit Judge Michele Towbin Singer issued a warrant for Everett’s arrest on charges of custodial kidnapping, interference with court-ordered custody, and concealing a minor contrary to a court order. Federal authorities became involved on Friday when it became evident that Everett had crossed state lines in order to avoid prosecution on the state charges.

Baumann told The Orlando Sentinel that he had planned to have his daughter Lilly vaccinated so she could enroll in preschool, but that Everett objected to that plan.

“She found this new idea that vaccines are horrible,” Baumann said. “I think she wanted to keep her from being vaccinated because that would keep her out of day care.”

Court documents suggest that the reason Everett didn’t want her daughter studying black history is that she had become involved with a man named Carlos Lesters, who is described as “a Confederate-flag-waving gun enthusiast” with family in Georgia and Kentucky. When authorities contacted Lesters, he informed them that she was gone “and not coming back.”


Racist is bad enough, anti-vaxxer is bad enough, but both?  That's just horrifically stupid.   Everett remains at large as federal officials look for her and her daughter and I hope they are found safely soon.
Posted by Zandar Permalink 10:00:00 AM No comments:

Email ThisBlogThis!Share to TwitterShare to FacebookShare to Pinterest
StupidiTags(tm): I CANNOT WITH THESE GUYS, Medical Stupidity, Racist Stupidity, Wingnut Stupidity