Last Call For Turned Out

I know I said this morning that turnout wasn't the reason why Conway lost because it's an off-year election with low turnout that Dems have won with less. but as Joe Sonka reminds me:

Why do we consider 30% turnout a valid election in any state?

How is that democracy?

Why do we accept this?
Posted by Zandar Permalink 9:41:00 PM No comments:

Email ThisBlogThis!Share to TwitterShare to FacebookShare to Pinterest
StupidiTags(tm): Bevinstan, Vote Like Your Country Depends On It, Voting Stupidity

The Carson (No) Show, Con't

You know guys, it's totally weird now that Ben Carson is leading, he wants no more televised debates.


Ben Carson’s campaign is suggesting that future Republican presidential debates only be broadcast over the Internet, according to a report in The Wall Street Journal.

The suggestion that the future debates not be televised is one of several calls for reforms from one of the frontrunners for the GOP nomination after a debate last week on CNBC that was widely criticized by the candidates.

“We also think there are too many debates,” Carson spokesman Doug Watts told the Wall St. Journal on Saturday. “They’re all bunched up and they really do take a lot of time away from the campaign and they take a lot of financial resources for us to be able to work on them.”

Carson is leading polls in Iowa, which hosts the first contest in the GOP primary in February. He also has surpassed Donald Trump in some national polls, giving him leverage in the loud debate over changing the debate process.

Carson’s campaign manager, Barry Bennett, is holding a meeting with GOP campaign representatives on Sunday night to discuss changes to the remaining debates.

The retired neurosurgeon’s campaign says future debates could be carried on Facebook and YouTube, unnamed sources familiar with the situation told the Journal. They believe doing so will strip television networks of their power to control the formats of the debates.

The campaign also says the forums should prioritize lengthy statements from candidates rather than frequent moderator intervention.


So Internet-popular Carson wants internet-only debates, a limited number of them, and ones that are more infomercial than debate.  In other words, now that he's ahead, suddenly people asking him questions are a bad thing.  In fact it's such a bad thing, the Carson campaign is publicly saying so.

Now, you tell me why that is.
Posted by Zandar Permalink 4:00:00 PM No comments:

So what the hell happened last night?  How did Matt Bevin win so easily?  Turnout was higher this year than in 2011 by a big number of raw votes and by percentages.

Here's what I have so far:

But, in Jefferson, Bevin got 30k more votes than David Williams did in 2011, and in Fayette, Bevin got 27k to Williams' 14k, a 13k difference.  Some of that came from Drew Curtis getting 10k votes in those 2 counties as an Independent when Gatewood Galbraith got 22k in 2011, but what this means is a healthy chunk of Republicans showed up in Louisville that didn't vote in 2011.

Conway lost county after county that Beshear won. 79 of them, to be exact.  In every case, turnout in these rural counties was higher and they turned out for Bevin.

Tens of thousands of people who voted for Steve Beshear in 2011 in fact turned around and voted for Matt Bevin last night.

Conway just got smoked in coal country and everywhere else.  The pollsters were badly, badly wrong, all of them.  Beshear voters turned on him in droves.


@ZandarVTS no. he lost because he is unlikable -- left thought he was meh and conservative Dems thought he was NOBAMA.
— Joe Sonka (@joesonka) November 4, 2015

And we know what Bevin's theory of government is.  He told us months ago.

“If the taxpayer is not getting a good return on their tax investment, then we should reevaluate it. I’m agnostic to what that means. I don’t have predetermined notion as to what this means for merit versus non-merit, Democrat versus Republican.


Government run like a business.  We've gone from "Taxes are the cost of civilization" to "If you are not productive, if you are not adding value, if you are not justifying your existence in terms of a return on the taxpayer’s money you ought to be nervous."

Guess who determines who and what is productive, valuable, and justified in Kentucky now?

In the end, this state voted to stick it to the ni-CLANG! president and his "War on Coal".  And when things only get exponentially worse in rural KY, it'll still be Obama's fault. 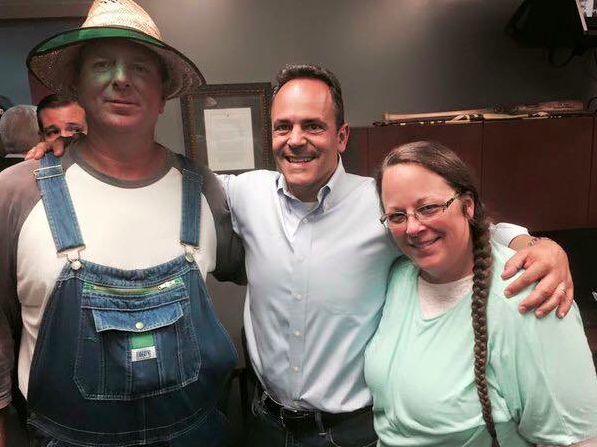 Welcome to Bevinstan.
Posted by Zandar Permalink 10:00:00 AM No comments:

Well, it's official, Matt Bevin is our new governor here.

Over the river in Ohio, legalized marijuana lost by more than 30 points as voters soundly rejected the plan for ten approved growing sites, as opponents call the measure an illegal monopoly.  However, a ballot issue to allow a non-partisan committee to redraw Ohio House districts won handily.

In Houston, Texas, the city's HERO non-discrimination ordnance lost by 25 points after the Texas Supreme Court invalidated the law and forced a ballot vote of the measure passed 11-6 last year by the City Council and outgoing Mayor Annise Parker.

San Francisco voters failed to ban short-term housing rentals, which would have put hometown startup Airbnb out of business in the city, and Washington State passed a measure banning the sale of endangered animal parts in the state.

In Mississippi, Gov. Phil Bryant easily won re-election by more than 30 points over an unknown Democratic challenger, while a ballot measure to force the state to fully fund educational spending levels established nearly 20 years ago failed by 4 points.
Posted by Zandar Permalink 7:00:00 AM No comments: