As widely expected, the grand jury in the murder of Breonna Taylor by Louisville police returned no indictments for her slaughter, only that one of the officers may have damaged other apartments with gunfire. Her execution was fully justified, according to AG Daniel Cameron. The reaction by Louisville's Black community was swift and also justified.

Protesters vowed Wednesday to continue their fight for racial justice after learning that just one of three Louisville Metro Police officers who fired shots at Breonna Taylor's apartment will be criminally charged.

The grand jury declined to bring charges against Sgt. Jonathan Mattingly and detective Myles Cosgrove, who were also involved in fatally shooting Taylor on March 13 at her south Louisville apartment.

"It's a tragedy. This is an embarrassment, and it's exactly why there have been protests for the last (119) days," said pastor Tim Findley, a regular at the protests. "This is a disappointing, hurtful, painful day in our city. What I just heard amounts to a slap on the wrist for him murdering, for them murdering Breonna Taylor.

A National Guard curfew was set up for 9 PM, and two LMPD officers were injured by gunfire.

Interim LMPD chief Robert Schroeder confirmed two officers were shot and sustained non life-threatening injuries. One officer is in surgery, and the other is alert and in stable condition.

A suspect has been arrested, Schroeder said.

One officer was shot in the abdomen below their bulletproof vest and is in surgery, and a second was shot in the thigh, according to a source with knowledge of the situation.

The shooting occurred at South Brook Street and Broadway Avenue, according to MetroSafe.

MetroSafe confirmed a second shooting occurred on West Broadway at 9:30 p.m. and said an officer was involved but did not say if the officer was a shooter or victim.

Max Gersh, a photographer working for The Courier Journal, said he saw "a line of officers move toward a gas station with rifles up. Shortly after, they had somebody pinned to the ground and cuffed." He said he wasn't there when the officers got shot.

Doesn't matter if he was the shooter, LMPD have their suspect.  The family is furious because they know justice will never happen under the Trump regime.

For nearly 200 agonizing days, Breonna Taylor's family has waited to know if three Louisville police officers would face charges in her death.

On Wednesday, they got their answer.

And it wasn't what they had hoped for.

At the youth homeless shelter in Grand Rapids, Michigan, where she works as a residential adviser, Taylor's cousin Tawanna Gordon watched with tears in her eyes as Kentucky Attorney General Daniel Cameron announced that only one of the officers was indicted by a grand jury — but not for killing Taylor.

"I'm not surprised," Gordon, 45, told The Courier Journal on Wednesday, minutes after Cameron's press conference ended. "But I'm mad as hell because nothing's changing. … Today's decision was an additional injustice on our family and this country. Until Americans start getting mad enough and speaking out and forcing legislators to change the laws for all races, nothing is going to change.

"And it needs to happen now. Not tomorrow, but today."

In his press conference, Cameron said he met with Taylor's mother, Tamika Palmer, and other family members before addressing the media.

"Every day this family wakes up to the realization someone they loved is no longer with them," he said. "There's nothing I can offer today to take away the grief and heartache this family is experiencing."

Palmer left without talking to media. And her attorneys said she would have no comment Wednesday.

We continue to be nothing more than animals to them, dumb beasts of burden who have to be put down at the slightest whiff of disagreement. The basis of policing in America today is "We require the right to kill Black people without consequence in order to protect white America."

The GOP's Global Race To The Bottom

The standing joke on Twitter about American political parties is 1) There's no policy difference whatsoever between the GOP and the Dems, and 2) in any other country, Democrats would be considered right-wing hardline conservatives. Neither one is true, neither one is funny, and the real problem is that in the developed world, the GOP is a straight up fascist white supremacist party with more in common with actual European fascist hate groups than the rest of democratic societies.

Experts on comparative politics say the GOP is an extremist outlier, no longer belonging in the same conversation with “normal” right-wing parties like Canada’s Conservative Party (CPC) or Germany’s Christian Democratic Party (CDU). Instead, it more closely resembles more extreme right parties — like Viktor Orbán’s Fidesz in Hungary or Recep Tayyip Erdogan’s AKP in Turkey — that have actively worked to dismantle democracy in their own countries.

The Supreme Court saga can’t be considered in isolation. It is symptomatic of a profound brokenness in American politics, one party dragging us away from the developed-world political standards we aspire to and towards a fight over the most basic of democratic principles: whether power should be shared. And that’s a disaster for American democracy.

“The only way we move forward is when Republicans reform, and cease to be an increasingly authoritarian white nationalist party,” says Steven Levitsky, a Harvard professor and the co-author (with Daniel Ziblatt) of How Democracies Die.

A 2019 survey of nearly 2,000 experts on political parties from around the world asked respondents to rate political parties on two axes: the extent to which they are committed to basic democratic principles and their commitment to protecting rights for ethnic minorities. The higher the number, the more anti-democratic and intolerant the party is.

The following chart shows the results of the survey for all political parties in the OECD, a group of wealthy democratic states, with the two major American parties highlighted in red. The GOP is an extreme outlier compared to mainstream conservative parties in other wealthy democracies, like Canada’s CPC or Germany’s CDU.

Its closest peers are, almost uniformly, radical right and anti-democratic parties. This includes Turkey’s AKP (a regime that is one of the world’s leading jailers of journalists), and Poland’s PiS (which has threatened dissenting judges with criminal punishment). Experts rate the GOP as substantially more hostile to minority rights than Hungary’s Fidesz, an authoritarian party that has made demonization of Muslim immigrants into a pillar of its official ideology. 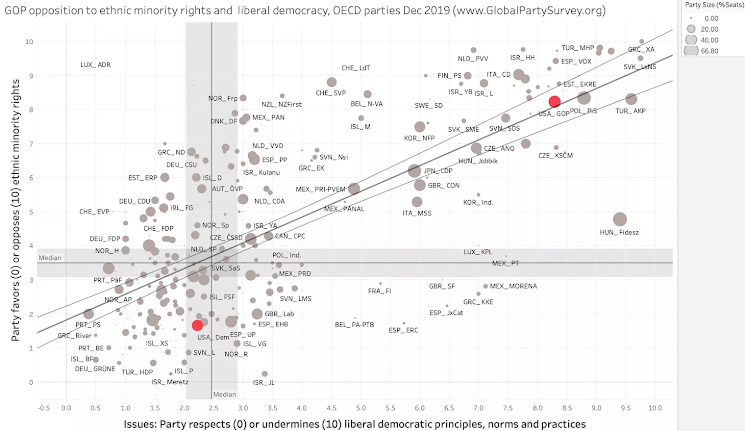 The US Democratic Party on the ol' racism/fascism scale is a relatively excellent 1.5 or so on racism and just over 2 on the authoritarianism.  Plenty of parties are more liberal, but the Dems are very cool on minority rights.  They're still more liberal than the median, which is pretty damn classically liberal at 2.5.
And then the GOP is way out there in no-shit dictator territory with over 8 on both the authoritarian and racism scales, putting them in the same general realm as Poland's fascist Law and Justice Party (PiS), Spain's far-right "Out of the EU" Vox Party, Slovakia's "gypsy terror" Romani hunting L'SNS brownshirts and Estonia's card-carrying actual neo-Nazi EKRE party.
So yeah, there's a clear choice here in November and people need to figure it out within the next six weeks.

White House Chief of Staff is replacing all federal agency White House liaisons in anticipation of a mass executive branch purge heading into the lame duck period (for maximum shenanigans before Biden is sworn in) or God help us, a second term where all those deemed insufficiently deferential to Dear Leader are disappeared.

White House chief of staff Mark Meadows told administration officials Monday to expect senior aides to be replaced at many government agencies, according to an internal email obtained by Axios.

Behind the scenes: Meadows asked the director of the White House Presidential Personnel Office John McEntee "to look at replacing the White House Liaisons (WHLs) at many of your agencies," according to the email. "John will be working with outgoing liaisons to explore other opportunities."

"Please welcome incoming liaisons as they begin their new roles," Meadows wrote. "I ask that you encourage your teams to equip the WHLs with everything they need to support your agency and the President's agenda."

"It is important that WHLs have direct access to principals and senior staff regarding all political hiring decisions."

Why it matters: As Meadows reminded the recipients of his email, these liaisons are the senior-level staff responsible for managing political appointees within each agency.

Between the lines: Liaisons are the White House's eyes and ears inside the agencies — and in the Trump administration they're charged with enforcing loyalty to the president and his agenda.

McEntee, the president's 30-year-old former body man who now runs hiring for the government, has become a controversial figure within the agencies.

Since taking over the role, McEntee has been systematically purging or reassigning agency officials deemed insufficiently loyal to Trump.

As we have previously reported, McEntee, in a highly unusual campaign, has been making significant staffing changes inside top federal agencies "without the consent — and, in at least one case, without even the knowledge — of the agency head."

This has not endeared him to some agency heads and career officials, but Trump expressed delight at McEntee's efforts, according to sources familiar with the president's private comments.

McEntee's "seismic generator in a china shop" approach hasn't produced the results that Meadows knows he will need in the Conversion To Fascism™ so he's doing the heavy lifting himself here and appointing loyalists to man the guillotines. Guess the kid doesn't have the instincts for the real pogrom action coming.

Meadows on the other hand seems raring to go.