Trump regime AG Jeff Sessions threw together a hasty press conference to announce that hey he was always going to recuse himself from decisions about anything involving the Trump campaign so what's the big deal, anyway?

Attorney General Jeff Sessions, facing a chorus of criticism over his contacts with the Russian ambassador, recused himself Thursday from any current or future investigation of Russian meddling in the 2016 presidential election. His conversations with the ambassador, Sergey I. Kislyak, came amid suspected Russian hacking directed at Hillary Clinton’s campaign.

Mr. Sessions said he made the decision after meeting with senior career officials at the Justice Department. He said he would not take part in any investigations “related in any way to the campaigns for president of the United States.”

The remarks by Mr. Sessions came not long after President Trump on Thursday expressed his support for Mr. Sessions and said he should not recuse himself from the investigation. Mr. Sessions was a key adviser and surrogate for Mr. Trump’s campaign.


But of course this means that Sessions thinks he is off the hook.  Nobody else in the AG's office is going to call for a special prosecutor and be immediately fired by Trump.  Again, Republicans are clearly hoping that this story goes away now.

Only one problem:  it won't.  The FBI investigation is ongoing.  And leaks from the intelligence community are rapidly turning into a real problem for the Trump regime.   If it turns out Sessions made any phone calls to Kislyak, then we could find out what was said there, the same way we did with Flynn.

At this point Sessions is still in the hotseat, and the temperature's only going to go up.
Posted by Zandar Permalink 9:48:00 PM No comments:

Our Media Is Too Stupid To Function

At this point the Trump regime is now publicly laughing at the press, openly bragging  that they conned media outlets like CNN into believing Trump was "open to immigration reform" in order to get positive press attention.

CNN reported Wednesday on a senior administration official admitting that the White House intentionally misled reporters ahead of President Donald Trump‘s congressional address in order to get generate positive press coverage as part of a “misdirection play.”

Multiple reports Tuesday indicated that Trump would embrace a more moderate tone on immigration and would announce that he was willing to negotiate granting millions of illegal immigrants legal status. Most of those reports, cited to a “senior administration official,” came immediately after anchors lunched with Trump. Some of those outlets then just attributed the claim to the president himself.

But when it was time for Trump to actually give the speech, he said nothing of the sort. CNN’s Sara Murray complained the next day about “the bait and switch that the president pulled when it came to immigration yesterday. He had this meeting with the anchors, he talked about a path to legal status.”

“Basically they fed [them] things that they thought these anchors would like, that they thought would give them positive press coverage for the next few hours. A senior administration official admitted that it was a misdirection play,” she reported.

The Trump regime is in full state-controlled media mode, and nobody will challenge them until it's far, far past being too late.
Posted by Zandar Permalink 4:00:00 PM No comments:

A double feature of Trump regime/Russian hacking news for you today, first the NY Times reminds us that the Obama administration correctly foresaw that the Trumpies would try to shred The Donald's paper trail to Moscow, so they kept evidence for the FBI ahead of the transition.


In the Obama administration’s last days, some White House officials scrambled to spread information about Russian efforts to undermine the presidential election — and about possible contacts between associates of President-elect Donald J. Trump and Russians — across the government. Former American officials say they had two aims: to ensure that such meddling isn’t duplicated in future American or European elections, and to leave a clear trail of intelligence for government investigators.

American allies, including the British and the Dutch, had provided information describing meetings in European cities between Russian officials — and others close to Russia’s president, Vladimir V. Putin — and associates of President-elect Trump, according to three former American officials who requested anonymity in discussing classified intelligence. Separately, American intelligence agencies had intercepted communications of Russian officials, some of them within the Kremlin, discussing contacts with Trump associates.

Then and now, Mr. Trump has denied that his campaign had any contact with Russian officials, and at one point he openly suggested that American spy agencies had cooked up intelligence suggesting that the Russian government had tried to meddle in the presidential election. Mr. Trump has accused the Obama administration of hyping the Russia story line as a way to discredit his new administration.

At the Obama White House, Mr. Trump’s statements stoked fears among some that intelligence could be covered up or destroyed — or its sources exposed — once power changed hands. What followed was a push to preserve the intelligence that underscored the deep anxiety with which the White House and American intelligence agencies had come to view the threat from Moscow.

It also reflected the suspicion among many in the Obama White House that the Trump campaign might have colluded with Russia on election email hacks — a suspicion that American officials say has not been confirmed. Former senior Obama administration officials said that none of the efforts were directed by Mr. Obama.


It's looking more and more like those efforts to preserve this evidence will make a huge impact on the the weeks and months ahead, and I'm sincerely hoping that the documents left behind will be what breaks this regime.

And that brings us to part two of today's bombshell, this half coming from the Washington Post: Attorney General Jeff Sessions is now neck-deep in this Moscow mess.

One of the meetings was a private conversation between Sessions and Russian Ambassador Sergey Kislyak that took place in September in the senator’s office, at the height of what U.S. intelligence officials say was a Russian cyber campaign to upend the U.S. presidential race.

The previously undisclosed discussions could fuel new congressional calls for the appointment of a special counsel to investigate Russia’s alleged role in the 2016 presidential election. As attorney general, Sessions oversees the Justice Department and the FBI, which have been leading investigations into Russian meddling and any links to Trump’s associates. He has so far resisted calls to recuse himself.

When Sessions spoke with Kislyak in July and September, the senator was a senior member of the influential Armed Services Committee as well as one of Trump’s top foreign policy advisers. Sessions played a prominent role supporting Trump on the stump after formally joining the campaign in February 2016.


And if the name Sergey Kislyak sounds familiar, he's the same Russian ambassador that Mike Flynn talked to over the Christmas holidays about relaxing sanctions against Moscow.  You know, the part that helped get Flynn fired (again).

So now the Russian story goes to a new level with Sessions involved.  He's directly involved, and he omitted the fact that he was to the Senate during his confirmation process.  He lied under oath, guys.  This is going to be huge.  Remember, Sessions was not just a Senator at the time these conversations took place, he was also an official Trump campaign adviser at the time...for national security.

Let that sink in.

Again, this story will not go away, because every week we discover a new layer.  And the Trump regime is square in the crosshairs now.  Sessions has to recuse himself and appoint an independent counsel at the minimum. 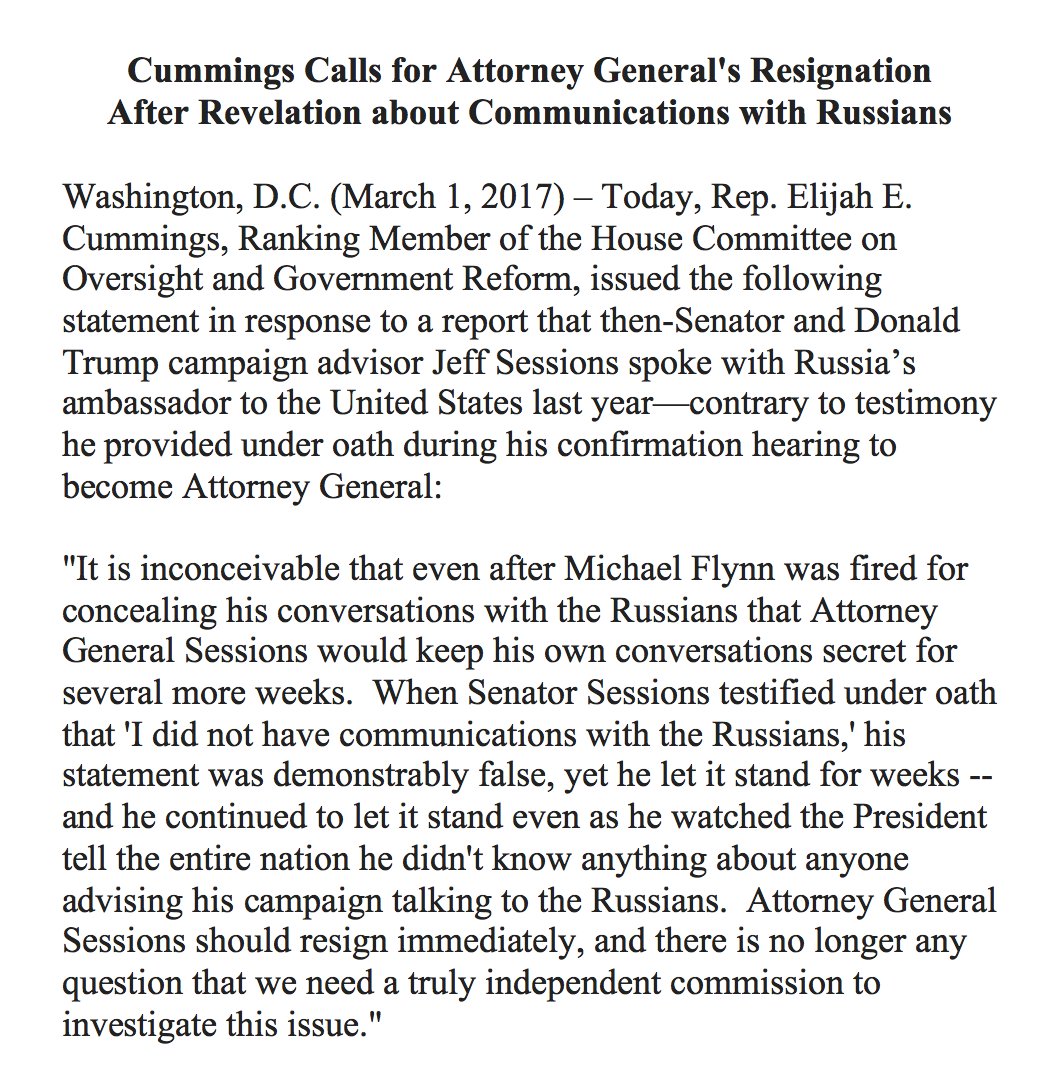 Democratic senators like Claire McCaskill and Liz Warren are also calling on Sessions to step down. This is pretty serious, folks.  We'll see what happens, but things are going to move quickly from this point on.  Count on it.
Posted by Zandar Permalink 10:00:00 AM No comments: