Last Call For The Bouncy Castle

As Donald Trump got a bounce from the Republican convention two weeks ago, Hillary Clinton got one from last week's Democratic convention and is now firmly back in the lead.

Hillary Clinton has received a bump in support after the Democratic convention and has now pulled ahead of Donald Trump.

Forty-six percent of voters nationwide say they'll vote for Clinton in November, while 39 percent say they'll back Trump. The race was tied last week after the Republican convention. Clinton led by a similar margin in June.

Clinton got a four-point bounce after her party's convention, compared to a two-point bump for Trump after his convention.

When compared to previous Democratic presidential nominees, Clinton's bounce is similar to those President Obama got in 2012 and 2008, but short of the 13-point bounce her husband, Bill Clinton, received in 1992. In 2000, support for Al Gore rose 10 points after the Democratic convention, but he went on to lose a close race that fall.


Indeed, 538's daily election forecast shows a big reversion back to a Clinton lead in the overall post-convention polling from the weekend. 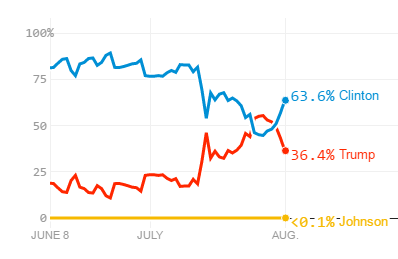 A couple things from that CBS poll: Clinton maintains her lead with college-educated white voters. If that holds up through election day, she wins.  Also, one in six registered independent voters say that they definitely will not vote this year, but independent voters tend to be older, white male voters: Trump's base.  If that's true, that also helps Clinton.

Still, as August opens we're a good 90+ days away from the election, a lifetime in politics.  It's also getting close to the time for pollsters to start switching to their "likely voters" versus "registered voters" models, and that's where we're going to see stuff all over the place until we have multiple polls in with those models, probably starting next month.

Finally, we'll start seeing more state polls too.  Those are going to be very interesting "likely voter" models this time around.

In other words, expect a lot of jumps in polls one way or another through August and into Labor Day week, where traditionally polls start getting more serious and consistent.

As The Nina Turner Turns

It looks like former Ohio state lawmaker and Bernie Sanders supporter may be defecting to Dr. Jill Stein and the Green Party in a move that I can't say surprises me.

Nina Turner, the Democratic former state senator from Cleveland who has emerged as a rallying figure for Bernie Sanders' disappointed supporters, said she is considering an offer to run for vice president on the Green Party's national ticket.

The Green Party opens its convention Thursday in Houston. Turner would stand for nomination there if she agrees to be Stein's running mate. Her decision is expected in the coming days.

Turner is less than a year removed for a top position at the Ohio Democratic Party, which she left last fall after joining Sanders' Democratic presidential bid as a high-profile surrogate. The move caused a stir. Turner initially had favored Hillary Clinton, whose husband, former President Bill Clinton, helped Turner raise money for her unsuccessful Ohio secretary of state run in 2014.


Turner bailing on being an Ohio state senator was probably a smart move to make for someone with national ambitions.  But backing Sanders over Clinton, and then become the post child for the "Never Hillary" movement pretty much ends that chapter in her career.

Turner could have moved on to bigger and better things, but if she becomes Stein's VP, she's going to be an unfortunate electoral history footnote rather than a real contender.  There's certainly room on the Democratic bench for somebody as obviously intelligent and passionate as Turner is, but not if she tells the entire party to go screw itself.

We'll see what happens, but I've got little sympathy for her when this blows up in her face and she comes crawling back to the Democrats.
Posted by Zandar Permalink 4:00:00 PM No comments:

Republicans are scrambling once again to contain the damage from Donald Trump, this time from Trump attacking the parents of a Muslim Army Captain who died in Iraq in 2004.  Leading the damage control charge is none other than "my senator" Mitch the Turtle himself.

"I agree with the (Khans) and families across the country that a travel ban on all members of a religion is simply contrary to American values," McConnell said in a statement.


That will only open up McConnell to charges of being a "cuckservative", the all-purpose insult for the Trump crowd against what they see as those womanish, wimpy Republican males too emasculated to admit Trump is always right.  So far the careers of dozens of "cucks" are littering the ashes of the modern GOP right now, and the casting of Trump as America's ultimate alpha male that will win over women voters is an important part of the narrative.

Americans have been rattled by recent attacks in France and Florida, the murder of police officers in Texas and Louisiana, and widespread protests over the killings of unarmed black men, polls show.

For White, it’s a one-issue election. “Security,” she said. “Nothing else matters.”

A year ago, Penny Nance, president of Concerned Women for America, a conservative advocacy group, was a blistering critic of the thrice-married Trump because of comments he made about Fox News anchor Megyn Kelly that many felt were sexist.

But Nance now supports Trump and says the candidate can fashion an effective message for women centered on national security, she told Reuters on the sidelines of the convention. “Every day we wake up and get our kids ready for school and the television is on and there is another attack,” she said.


So no, Trump attacking the Khan family won't hurt him with his base in the least.  The only thing that will is if Trump surrenders to the "cucks".
Posted by Zandar Permalink 10:00:00 AM No comments: