Last Call For The Same Song And Dance

Republicans are getting sloppy.  It's taken then weeks to come up with this latest poutrage, that captured alleged Benghazi attack mastermind Ahmed Abu Khatallah can't possibly be tried in criminal court because, umm, superpowers or something.

“I have serious concerns that conducting a rushed interrogation onboard a ship and then turning Abu Khatallah over to our civilian courts risks losing critical intelligence that could lead us to other terrorists or prevent future attacks,” Sen. Kelly Ayotte, R-New Hampshire, said in a statement Saturday. "I've asked the Defense and Justice Departments for an update on his status-including whether he has been told he has the right to remain silent."

Shortly after the White House announced Abu Khatallah’s capture on July 17, Republicans like Florida Sen. Marco Rubio began to criticize President Barack Obama’s administration because they believed the alleged terrorist should go through a military tribunal at Guantanamo Bay instead of being tried in a federal court.

“If they bring him to the United States, they're going to Mirandize this guy and it would be a mistake for the ages to read this guy his Miranda rights,” said South Carolina Sen. Lindsey Graham.

But the White House has defended its decision, saying that they have successfully tried a number of terrorists domestically and that no new captives have gone to the Guantanamo Bay detention facility in years.

“We have not added a single person to the GITMO population since President Obama took office, and we have had substantial success delivering swift justice to terrorists through our federal court system,” National Security Council Spokeswoman Caitlin Hayden said in a statement the day the capture was announced.


In other words, Republicans are going to call President Obama weak and a traitor for not torturing "intelligence" out of Abu Khatallah, if you can believe that nonsense.  But, that's where we're going to be after the Sunday shows tomorrow, because our idiot media will somehow take this seriously.
Posted by Zandar Permalink 8:45:00 PM No comments:

On Tuesday, Timothy Ray Murray challenged longtime incumbent Rep. Frank Lucas (R-OK) for the Republican nomination in Oklahoma's 3rd Congressional district. Murray lost, but he did manage to pull in 3,442 votes, good for 5.2 percent of the total. Now Murray says he will contest the outcome of the election. Because, he says, Lucas is dead and has been replaced by a "look alike."

"The election for U.S. House for Oklahoma’s 3rd District will be contested by the Candidate, Timothy Ray Murray," Murray wrote in a press release posted on his campaign website. "I will be stating that his votes are switched with Rep. Lucas votes, because it is widely known Rep. Frank D. Lucas is no longer alive and has been displayed by a look alike."

On the website, Murray claims that Lucas and "a few other Oklahoma and other States’ Congressional Members," were executed "on or about" Jan. 11, 2011 in southern Ukraine.

"On television they were depicted as being executed by the hanging about the neck until death on a white stage and in front of witnesses," the website claims. "Other now current Members of Congress have shared those facts on television also. We know that it is possible to use look alike artificial or manmade replacements, however Rep. Lucas was not eligible to serve as a Congressional Member after that time."


Because he's a dead clone, or a replicant.  Or a pod person.


Remember when the worst thing about Republicans was that they would occasionally say something stupid or misspell "potato" or invade some crapass Central American country for a couple of weeks?  Those were good times.  Good time indeed.
Posted by Zandar Permalink 4:00:00 PM No comments:

Email ThisBlogThis!Share to TwitterShare to FacebookShare to Pinterest
StupidiTags(tm): GOP Stupidity, I CANNOT WITH THESE GUYS, Wingnut Stupidity

The new Pew Research Center study on America's political ideology is a fascinating read, finding that the country is far from just a red/blue dynamic.  The Pew study finds eight different categories of American voters, ranging from Steadfast Conservatives to Solid Liberals to Bystanders who don't vote or care about politics at all (and a quiz to find out where you fit) based on responses to 23 questions.

Vox's Max Fisher discovered something rather depressing however.  One of those questions involves blacks and discrimination, and the numbers are pretty breathtaking: 63% of Americans believe that blacks who can't get ahead have only themselves to blame, including majorities of 6 of Pew's 7 categories of American voters.

A wide majority of Americans say that, if black people are struggling to advance in society, then it is primarily their fault and not because of discrimination. That's the majority view for some types of liberals but is far, far more common among conservatives. Over 80 percent of conservatives say they agree that "Blacks who can't get ahead are mostly responsible for their own condition," while just some seven percent say that "Racial discrimination is the main reason why many black people can't get ahead these days."

That's based on Pew pollsters asking Americans which of those two statements they agree with more. Nationally, 63 percent say "blacks who can't get ahead are mostly responsible for their own condition" versus 27 percent who say "racial discrimination is the main reason why many black people can't get ahead these days." That's more than two-to-one. 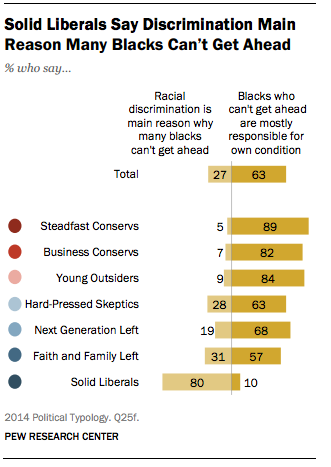 Only Solid Liberals, which make up 15% of Americans, believe discrimination is still the main reason why African-Americans who can't get ahead are unable to do so. When it comes to the two groups of Millennial voters (libertarian-leaning Young Outsiders and socially liberal Next Generation Left) who together account for 26% of America, only about one in seven believe discrimination is more of a factor than lack of hard work.

Solid Liberals on the other hand overwhelmingly believe that discrimination is still a problem.  That's because, as Fisher points out, it still is.

The Atlantic's Ta-Nehisi Coates, in his recent cover story "The Case for Reparations," wrote about the popular American fiction that the age of widespread discrimination against black people is over in American, as are its effects. Because, even though it is widely perceived as fact by American conservatives and even liberals, it is a fiction.

In fact, not only does discrimination continue today, but the consequences of two centuries of slavery and one century of explicit white supremacy still directly impact and hold back black families.


The evidence is there, but of course talking about it remains taboo.
Posted by Zandar Permalink 10:00:00 AM 2 comments: