The housing market is absolutely going to fold soon, it's just unsustainable with rent gouging like what's going on in New York City, where you now need well into three times the median national wage to even be considered for an apartment at four times the median rent.

New York City’s housing market has always been competitive, but renters are facing a particularly tough flat hunt now. The median monthly rent for a one-bedroom apartment in Manhattan reached $3,995 in April, a record 38% year-over-year increase and well above pre-pandemic levels, data from the real estate brokerage Douglas Elliman showed.

In New York City, it’s standard for landlords to apply what is known as the 40x rule to judge someone’s ability to pay their rent. In order to qualify as a tenant, a person’s annual gross income should be at least 40 times the monthly rent. To rent a one-bedroom at Manhattan’s current median price, that means an income of $159,800 or more. In Brooklyn, where the median one-bedroom apartment goes for $2,900 a month, anyone with an income of less than $116,000 annually will also struggle to qualify.

New York City rents point to a deepening affordable housing crisis in the city as it struggles to bounce back from the pandemic. It also calls into question the feasibility of mayor Eric Adams’ repeated pleas to have employees return to work in person.

Rising rents impact New Yorkers particularly hard because two-thirds of the population rent, twice the national rate, according to a report by The New York Times. The pain extends to aspiring home owners too—a recent Zillow survey found that half of US home buyers are crying during the process.

Prices are forecasted to rise even higher in the summer. The warmer months have always been primetime for moving as it catches new students who relocate to the city, and families with kids tend to use the school holidays to move.

In April, bidding wars accounted for more than one in five new lease signings in Manhattan, according to Douglas Elliman. In those instances, landlords received an average premium of nearly 11% above asking price. It’s a sharp contrast to just a year ago when landlords were regularly handing out one month’s free rent and other concessions like waived utilities and amenities fees to attract tenants.

Several theories exist for surging rent prices. The one-bedroom flat is reportedly the most in demand as couples forced to spend more time with their other halves during the pandemic split up, sending more single flat hunters into the market.

It also coincides with large corporates, including JPMorgan, Goldman Sachs, and Google, recalling workers back to the office. With the future of work likely some kind of hybrid, people are willing to spend more money on their apartments to have space for a home office.

Another factor is Airbnb, which is distorting the market. There are more entire-apartment Airbnb rentals available in New York City than standard rental apartments by several thousand units, Curbed reported recently, squeezing supply even further.

So how do people get around these expensive prices? Many shack up with someone—a roommate, a partner, or they find a guarantor with at least 40x the rent who agrees to pay if the tenant defaults.

Another option is to downsize. The median studio rent was $2,994 in Manhattan and $2,674 in Brooklyn for the month of April. However, even at those lower rates, anyone not earning six-figures will be put out.

It won't be long either.  Be careful, because once the housing market augurs into the tarmac, the economy goes with it.
Posted by Zandar Permalink 10:20:00 PM No comments:

Greg Sargent looks at the growing Proud Boys seditious conspiracy being charged by the federal government over January 6th and what it means for the white supremacist domestic terror networks in 2022.

It’s tempting to dismiss all the 1776 talk as something akin to adolescent revolutionary cosplay. But the way 1776 comes up in the indictment — combined with some surprising new details it reveals — should prompt a serious look at how far-right extremist groups genuinely think about the long struggle that they envision themselves waging.

In short, groups such as these generally are driven by a dangerous vision of popular sovereignty. It essentially holds that the will of the truly authentic “people,” a flexible category they get to define, is being suppressed, requiring periodic “resets” of the system, including via violent, extralegal means.

Such groups aren’t going away anytime soon. We should understand what drives them.

I mean it's white supremacist dogma, but there is somewhat more to it than that.

In this context, while all the 1776-oriented talk might seem like posturing, it points to something real and enduring on the far right.

It isn’t easy to pin down the Proud Boys, who tend to define themselves as defenders of Western civilization. But Kathleen Belew, an expert in right-wing extremism, has discerned hints of white power ideology in some of the group’s symbolism and messaging.

As Belew notes, the white power movement includes opponents of non-white immigration, militia groups, and white supremacists, loosely bound by an ideology centered on the violent defense of whiteness. On Jan. 6, numerous such groups and adherents attacked the Capitol.

Tarrio’s views appear pretty convoluted. In a 2021 interview, he admitted that the 2020 election had not been stolen from former president Donald Trump, and went through the motions of disavowing the Jan. 6 violence. Yet he openly celebrated the “fear” that members of Congress felt of “the people,” and helped mobilize Proud Boys to mass around the Capitol that day.

So how to make sense of that, as well as the broader tangle of ideologies on the far right?

A helpful framework comes from Joseph Lowndes, a scholar of the right wing at the University of Oregon. As Lowndes notes, a longtime strain in American political culture treats procedural democracy as itself deeply suspect, as subverting a more authentic subterranean popular will.

For such ideologues, what constitutes “the people” is itself redefined by spasmodic revolutionary acts, including violence. The people’s sovereignty, and with it the defining lines of the republic, are also effectively redrawn, or even rebirthed, by such outbursts of energy and militant action.

In this vision, Lowndes told me, the “people” and the “essence of the republic” are “made new again through acts of violent cleansing.” He noted that in this imagining, the “people” are something of a “fiction,” one that is essentially created out of the violent “act.”

“This regeneration through violence is going to be with us for a long time," Lowndes said, "because it is fundamental to the right-wing political imagination.”

Lurking behind all the 1776 cosplay, then, is a tangle of very real radical and extreme ideologies. Importantly, they’re sincerely believed in, and they aren’t going away.

Straight white Christian men are "we the people" and everyone else is suspect. Rights, citizenship, and lives can be taken at a whim.
In the end, they're bullies.
Bullies need to get punched in the mouth.
Posted by Zandar Permalink 4:00:00 PM No comments:

Another Day In Gunmerica, Con't

As mass shooting numbers continue to mount this year, and Americans are dying daily from gun violence, a new CBS News poll finds an overwhelming majority of Americans believe that Congress and President Biden can do something about Gunmerica, but nearly half of Republicans say that mass shootings are the price we pay for being free.

Most Americans continue to favor stricter gun laws, but feel that getting them passed is stymied by big money and inaction by politicians. And Americans say the nation's gun debate — no matter where they stand on it — is influenced more by partisanship than public safety. Polling shows they're partly right.

There is bipartisan support for measures that are applied to people — such as background checks and a federal "red flag" law, which most Americans think could do a lot to help prevent mass shootings. But there are more partisan differences over what to do about the guns themselves.

Democrats look for more gun restrictions — including banning AR-15s — and fewer people having guns in general, and also support background checks and more mental health services. But Republicans tend to oppose AR-15 bans and feel that allowing more people to carry guns and more armed security would stop mass shootings. They think that these measures, along with better mental health screening, would be most effective in preventing mass shootings.

Americans overall overwhelmingly believe mass shootings can be prevented, if we try. But Republicans, in particular, are less likely to think so — four in 10 Republicans say mass shootings are, unfortunately, something we have to accept in a free society.

In all, most don't expect Congress to pass any significant changes to gun policy in the coming months. 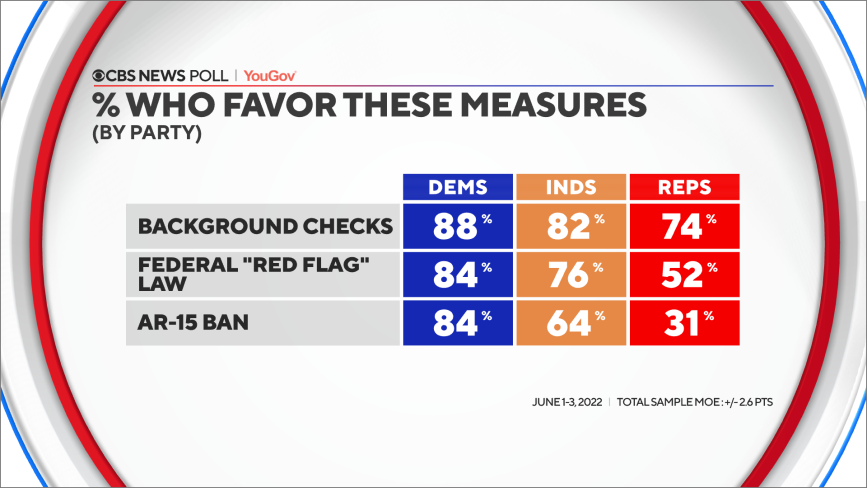 But the only issue that Senate Majority Leader Mitch McConnell and President Manchin will allow to be considered is a red flag law. Everything else is already off the table in Senate negotiations, as the bill being considered will almost certainly be a copy of Florida's red flag laws under then GOP Gov. Rick Scott.

The senators at the helm of negotiating gun legislation are looking to the Florida law passed in 2018 after the school shooting in Parkland as a potential blueprint for the nation, Sen. Chris Murphy said Sunday.

Murphy (D-Conn.) said on CNN’s “State of the Union” that the bill passed by a Republican legislature and signed into law by then-Republican Gov. Rick Scott has elements that senators are considering as they look to pass gun legislation following a school shooting that took place in Uvalde, Texas, killing 19 children and two teachers.

“Well, Sen. Scott, then-Gov. Scott, passed that law in Florida because it was the right thing to do, but also because Republicans saw it as good politics. We have to make the case for Republicans that right now this is good politics,” Murphy said.

The Florida law, known as the red flag law, raised the age to buy long guns, including AR-15s, from 18 to 21, added a three-day waiting period, created a program to allow trained school staff to carry guns and invested $400 million in mental health and school security.

It won't pass the Senate, despite McConnell singing on to his own bill. It won't get more than five or six Republican votes for a filibuster, meaning it will come up well short of sixty votes, and everyone will go "oh well".
Nothing's going to happen.  Nothing ever will happen, not with Senate Republicans and with Joe Manchin. The 70%+ people who expect nothing from Republicans are right.
It's just another day in Gunmerica.
Posted by Zandar Permalink 10:00:00 AM No comments: