Last Call For Sort Of Shutting Down The Government

Sen. Rand Paul has a great idea, mainly involving not shutting down the government by the House GOP forcing defunding Obamacare, just the House GOP permanently delaying the insurance mandate, the exchanges opening, the subsidies for working class families, and everything else from actually going into effect.

Sen. Rand Paul (R-Ky.) said Sunday that Republicans should “stand up and fight” against ObamaCare, but warned that forcing a government shutdown over funding for the law is the wrong strategy.


"I don't think shutting down the government is a good idea, but I do think that we were elected, conservatives were elected, to try to stop this overreach, this government takeover of healthcare," Paul told "Fox News Sunday."

Paul said Republicans should use the desire to avoid a government shutdown to squeeze concessions out of Democrats, predicting that a spending bill that headed to conference committee could see a delay of the individual mandate or opening of the insurance exchanges.

"People want us to stand up and fight, I'm willing to stand up and fight," Paul said. "We should use the leverage of controlling one-third of the government. We don't control all of the government, but Republicans control the House of Representatives, they should stand up, use that power to at the very least make that law less bad, delay it, do something we can to protect the American public from the law."

This WSJ profile of the Southern Baptist Convention's new political director, Russell Moore, is very interesting to me from a "know your opponent" standpoint.  I'm not a devout Christian by any means, or even religious, but the political strategy that Moore is pushing seems to be best described here as "pragmatic victimhood".  And if the notion seems odd to you that the Christian majority in the US is suddenly acting like an aggrieved minority, you've not been paying attention to the Religious Right's shell game in the age of Obama.

'The Bible Belt is collapsing," says Russell Moore. Oddly, the incoming president of the Southern Baptist Convention's Ethics and Religious Liberty Commission doesn't seem upset. In a recent visit to The Wall Street Journal, Mr. Moore explains that he thinks the Bible Belt's decline may be "bad for America, but it's good for the church."

Why? Because "we are no longer the moral majority. We are a prophetic minority."

The phrase is arresting coming from such a prominent religious leader—akin to a general who says the Army has shrunk to the point it can no longer fight two wars. A youthful 41, Mr. Moore is among the leaders of a new generation who think that evangelicals need to recognize that their values no longer define mainstream American culture the way they did 50 or even 20 years ago.

On gay marriage, abortion, even on basic religious affiliation, the culture has moved away. So evangelicals need a new way of thinking—a new strategy, if you will—to attract and keep believers, as well as to influence American politics.

The easy days of mobilizing a ready-made majority are gone. By "prophetic minority," he means that Christians must return to the days when they were a moral example and vanguard—defenders of belief in a larger unbelieving culture. He views this less as a defeat than as an opportunity.


It's not like ascribing fever-bright martyrdom to a group of religious fanatics is new in the history of the planet or anything, or even American history.  But in a decade they've gone from "We're the moral majority because this will always be a Christian nation" to "If you are a true Christian, you will fight this battle with us because America has lost its way".

It's a call to arms against the rest of the country.  The prophetic minority strategy makes Christians morally correct because they are being "persecuted" for their beliefs by a country that increasingly doesn't buy into their intolerance towards LGBTQ Americans, racial minorities, women, other religions, secular Americans, and even more liberal, inclusive Christians (of which I come from a long line of.)  And those who don't meet the standards, well, it's time to go after them.

His cultural revival plan is also to focus more on local churches. When the Supreme Court's decisions on gay marriage came down in June, Mr. Moore sent a message to pastors to help them talk with their congregants about the Southern Baptist opposition to the law. "We don't hate our gay and lesbian neighbors," he says, but redefining marriage on their behalf is another matter.

There are a couple of reasons why Christians are losing the debate over gay marriage, Mr. Moore says. One is that even many Christians don't have a real understanding of what marriage is. "We have embraced certain aspects of the sexual revolution," he says, like the "divorce culture."

Another is that many people assume "my marriage is my business"—why should they care if their neighbors marry someone of the same sex? Mr. Moore says the part of the marriage ceremony when the pastor asks if anyone knows of a reason why the couple should not wed is like a "vestigial organ." No one ever objects "except in romantic comedies," but there was a time when a couple's marriage decision was thought to be of church concern. He would like it to be again.

As a "prophetic minority," Mr. Moore thinks his most profound political task will be defending religious liberty from the assaults of a secular government. The cause is at the heart of his plan to fight the contraception mandate in ObamaCare. President Obama may have thought that religious employers would accept being forced to pay for contraception, the morning-after abortion pill or sterilization under the law. "But we are not adjusting to the new normal," Mr. Moore avers. "We are not going to go away or back down."


So yes, from this standpoint, they are a minority.  They are hardly aggrieved, however.  But that's how they want to play it, and that's the new political strategy:  everything that the Obama administration is doing is an "assault on the religious liberty" on those who say they are unfairly being persecuted for their proud intolerance.  The government cannot tell them to do anything that they don't believe they should have to do.  Decades of jurisprudence would say otherwise, but the basic plan is everything they don't like now violates the First Amendment's freedom of religion clause, and they will act accordingly.

So stand tall, anti-choicers, homobigots, and Talibangelicals.  Your right to shame, persecute, and harass those who don't meet your standards will be fought for tooth and nail.

What a nice religion to be based on the right to hate, not love, others.
Posted by Zandar Permalink 3:10:00 PM 1 comment:

Fifth birthday, that is.  I completely missed the fact we turned 5 years old this month (August 6th). 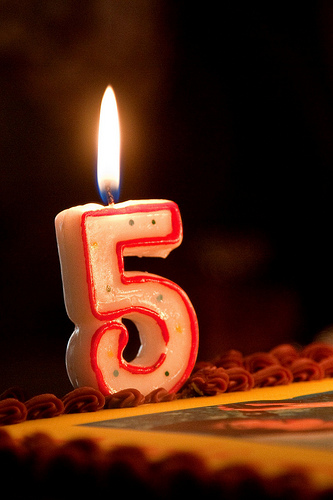 Here's hoping we keep going, in one form or another.  It's been a hell of a ride though, and it's been because of you guys.   Thanks for being a reader!