Well, we now know what at least some of those sealed charges were for Paul Manafort and Rick Gates from earlier in the week: Mueller's office just unloaded 32 counts including international money laundering against the pair.

New charges were filed Thursday against former Trump campaign chairman Paul Manafort and his business partner, ratcheting up the legal pressure on them as they prepare for a trial later this year.

The filing Thursday comes at a time of significant uncertainty in the case about when a trial might happen, or even who the defense lawyers will be. Last week, U.S. District Judge Amy Berman Jackson criticized both sides for what she called “unacceptable delays” in a case which still doesn’t have a trial date set.

Manafort and Gates were hit with a 12-count indictment in October — the first criminal charges in Mueller’s probe of Russian interference with the 2016 election. That indictment focused not on events in the 2016 race but financial transactions involving work by Manafort and Gates for a Ukrainian political party, and their failure to notify U.S. authorities that they were allegedly acting as lobbyists for a foreign government.

The new charges come as Gates’ legal strategy and defense team are still in question. His three lawyers have asked to leave the case, a request the judge is considering. The details of those discussions have not been described publicly, beyond a court filing that said they involve “highly sensitive matters” that would “potentially be prejudicial to (Gates) as well as embarrassing.”


And yeah, the money laundering charge is ugly: 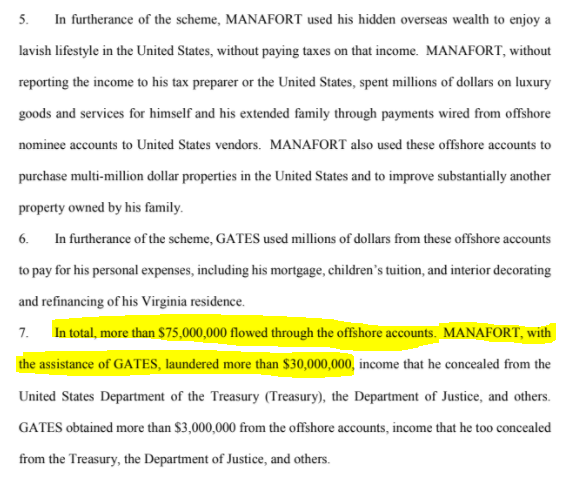 Vox has the full indictment here.

Both of these guys are in mucho trouble.  Somebody's going to flip. These charges are enough to put a guy in prison for a very long time.   And remember, there could be more sealed charges waiting.  Manafort's money laundering venue of choice? The same Cypriot banks that Vlad Putin's guys hang out with.

The student survivors of last week's school shooting in Parkland, Florida represent the largest threat yet to the NRA's total political dominance of lawmakers, and after biding their time over the weekend, NRA President Wayne LaPierre is leading the full-on assault against these kids and their families as this year's right-wing CPAC political conference gets underway today.

After a week of media silence following the school shooting in Florida, the National Rifle Association went on the offensive in its first public response to the massacre, pushing back against law enforcement officials, the media, gun-control advocates and the teenage survivors of the massacre who have pleaded for stricter gun laws.

In a series of statements, speeches and videos, the gun rights group — a powerful force in American politics — sought to stem what has been an emotionally charged wave of calls for new gun restrictions since police say a teenager armed with an AR-15 rifle killed 17 people at his former high school. An NRA spokeswoman debated survivors of the attack during a heated town hall Wednesday night, and in a speech Thursday morning, Wayne LaPierre, the NRA chief executive, excoriated the media for its coverage of the shooting.

“They don’t care about our school children,” LaPierre said near the start of the Conservative Political Action Conference, the largest annual gathering of American conservatives. “They want to make all of us less free.”

The NRA also released an advertisement Thursday morning that said “the mainstream media love mass shootings” and claimed that members of the media benefit from covering mass shootings in an effort “to juice their ratings and push their agenda.”

La Pierre, whose confrontational speeches have become a CPAC tradition, was not on early versions of the conference’s schedule. But when he arrived to speak, he reiterated his pitch for armed guards at schools and free firearms training of teachers. Then he rattled off businesses and people — from jewelry stores to Hollywood actors — who pay for security, calling for Americans to “harden our schools” in the same way.

“We at the NRA are Americans who continue to mourn, and care, and work every day to contribute real solutions to this practical problem,” he said. “Do we really love our money and our celebrities more than we love our children?”


LaPierre was particularly awful towards the students of Parkland today in his CPAC speech, and it's the same rhetoric that has ensured that the overwhelming majority of Americans who want fewer military-grade firearms and more background checks never get anywhere with Congress.  It's worked every time so far.

I'm not 100% sure it will work this time.  But that largely depends on how Americans vote in November, and by then the Parkland school shooting will have long been erased from America's memory banks by the deadly mass shootings that will almost certainly happen in the next several weeks and months ahead.

Email ThisBlogThis!Share to TwitterShare to FacebookShare to Pinterest
StupidiTags(tm): 2018 Elections, Gunmerica, Vote Like Your Country Depends On It, Wingnut Stupidity

Don Jr. is in India this week selling Trump stuff to the locals as the Trump Regime International Grift Tour continues.


Donald Trump Jr. arrived in India on Tuesday for a week-long visit, and his trip has already revealed a couple of things.

First, it’s clear that the Trump administration is still embroiled in huge conflicts of interest. And second, it’s evident that the Trump brand, though toxic at home, commands surprising power in the world’s second most populous country.

President Trump’s eldest son will be spending his time in India promoting Trump-branded luxury apartments across the country. He’ll be meeting with real estate brokers and potential buyers throughout the week in his family business’s biggest market outside the US.

He’s also offering a special reward to Indians who buy property from him: He’ll join them for an intimate meal.

Indian newspapers have been running advertisements that promise homebuyers willing to pay a roughly $38,000 booking fee an opportunity to “join Mr. Donald Trump Jr. for a conversation and dinner.”

Government ethics experts in the US are appalled by that prospect, and say that the arrangement encourages Indians — especially those with ties to India’s government — to use purchases of Trump-branded property as a way to gain favor with the Trump administration.

“For many people wanting to impact American policy in the region, the cost of a condo is a small price to pay to lobby one of the people closest to the president, far away from watchful eyes,” Jordan Libowitz, the communications director for Citizens for Responsibility and Ethics in Washington, told the Washington Post.

Trump Jr.’s India visit also highlights something else: While Trump’s polarizing presidency has put a dent in his domestic businesses, it doesn’t seem to have damaged his reputation in India. In fact, the Trump brand seems to be chugging along quite nicely there.


I'm trying to imagine the near-relativistic speeds at which Republicans would demand Congressional hearings, introduce legislation, and probably deliver articles of impeachment if Chelsea Clinton went to India to promote the Clinton Foundation while her mother was in the Oval Office.

But that's the new normal now, Trump Jr. is allowed to take money on trips abroad to sell the Trump brand wherever he goes, and people are expected to pay up if they want America to keep playing nice.

Sure we should be appalled at this, but nothing will change as long as Republicans remain in power.  This is how American diplomacy works now, you buy the Trump brand or else we pick up our $18 trillion a year economy and take it somewhere else.
Posted by Zandar Permalink 10:00:00 AM No comments: