Last Call For You Are The Perfect Drug

If you could build the perfect Trump regime FDA commissioner, you'd want somebody who:


I mean, does a guy like that even exist (oh yeah, he'd have to be a white guy) at all?  Man, who could fit this kinda legendary bill of PharmaBro douchebaggery?

Gottlieb has broad experience in regulating health care and working for the industry. He received nearly $200,000 in payments in 2015 from eight pharmaceutical companies, according to a federal database tracking drug industry payments. All were classified as “general” payments, meaning they were for things like travel and lodging, consulting or speaking fees. In 2014, he received more than $160,000 in general payments from companies.

Gottlieb has been on GlaxoSmithKline’s research and development board since 2010, according to his resume, and previously was on its oncology board. He advises Bristol Meyers Squibb on its cancer drugs and Cell Biotherapy, an oncology start up. Gottlieb was a senior adviser to Vertex Pharmaceuticals, maker of expensive cystic fibrosis drugs, from 2009 through 2016.

He holds seats on the boards of drug companies Daiichi Sankyo and Tolero Pharmaceuticals; medical lab company American Pathology Partners; MedAvante, a contract research organization, and Glytech, which makes an FDA-approved insulin dosing support system. He has also served on the board of insurance and medical diagnostic companies.

Gottlieb was FDA’s deputy commissioner for medical and scientific affairs from 2005 to 2007, and chief policy adviser to the CMS administrator in 2004, during implementation of Medicare Part D. Earlier he was a senior adviser and director of medical policy development at FDA, where he worked on issues like orphan drugs, and combination products.

Gottlieb has long been a resident fellow at the right-leaning American Enterprise Institute. He serves on the Federal Health IT Policy Committee, which makes recommendations to HHS’s Office for Healthcare Information Technology. He practices medicine at New York University where he is a clinical assistant professor.

Gottlieb's free-market health policy positions are well known thanks to regular op-eds in the Wall Street Journal and Forbes, and FDA-related testimony to Congress. This fall he gave testimony criticizing FDA’s regulation of generic drugs, during a hearing on pharmaceutical industry competition occasioned by the rising prices of the EpiPen.


Oh yeah, this guy is the gotdamn Maserati of Pharmabros.  He's Martin Shkreli with policy chops.  You need to invent cloning and approve the FDA cloning procedure just to make copies of this mofo right here.

Hope you liked food and drug regulations because man, they are going the hell away.

Nobody To Blame But Themselves

Congratulations, rural red state and Rust Belt Trump voters!  You just screwed yourself out of thousands of dollars a year and will be the people who suffer the most under Trumpcare. Nate Cohn at the NYT Upshot explains:

The people who stand to lose the most in tax credits under the House Republican health plan tended to support Donald J. Trump over Hillary Clinton in the 2016 election, according to a new Upshot analysis.

Over all, voters who would be eligible for a tax credit that would be at least $1,000 smaller than the subsidy they’re eligible for under Obamacare supported Mr. Trump over Hillary Clinton by a seven-point margin.

The voters hit the hardest — eligible for at least $5,000 less in tax credits under the Republican plan — supported Mr. Trump by a margin of 59 percent to 36 percent. 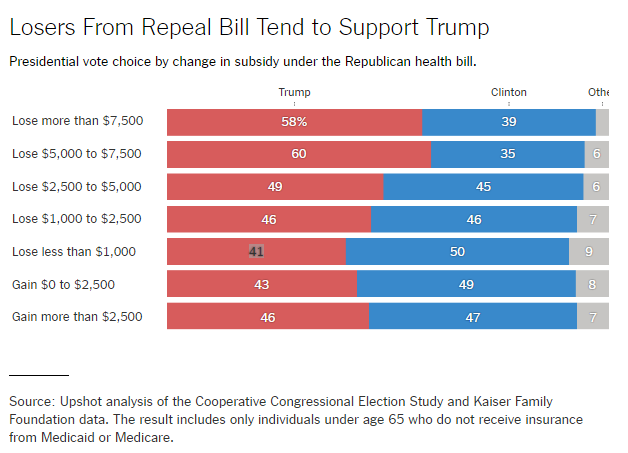 Congratulations, MAGA folks.  You played yourself every step of the way.

The plan would hit older and rural Americans hardest because it wouldn’t provide a larger tax credit to people with more expensive plans. Older Americans pay the highest premiums, and the law would allow insurers to raise premiums for older customers even further. The AARP opposes the bill as a result.


Trumpcare is a disaster that would badly hurt millions of Americans.  But the Americans who are going to suffer the most will be the ones who supported Trump by the largest margins, in particular older Americans and poorer Americans in rural areas.

I'd say that you're getting what you deserve, except for the fact the rest of us have to deal with the mess these crap-throwing primates are causing too.  We're right here in this mess with you, and we're the ones who are going to have to clean it up.

Again.  But in the meantime, Medicaid expansion is going to get nuked, and pre-ACA Medicaid along with it.

Most of the people who got insurance through Obamacare were the more than 11 million poor people who benefited from the Medicaid expansion that 31 states, plus Washington, DC, adopted. And they have the most to lose under the American Health Care Act, the Republican replacement.

The Republican plan rolls back the expansion, taking 4 million to 6 million people off the rolls, according to Standard & Poor’s. But it goes further than that as well.

The AHCA converts Medicaid from a matching program, in which the federal government chips in a set amount for every dollar states spend on beneficiaries, to a capped subsidy, where the feds give states a set amount per enrollee every year, an amount that rises according to a fixed formula instead of according to need.

The cumulative effect, according to an analysis by the Center on Budget and Policy Priorities, is a $370 billion cut to federal funding to Medicaid over 10 years. Some of that money could be made up for by states, but most of it won't be.

And because Medicaid is already the cheapest insurance there is in America — cheaper per person than either Medicare or private insurance — cuts of that scale will necessitate kicking millions of people off the program.


And all of that will go to the wealthy in the form of tax cuts.  Do you get it now, Trump voters?
"Make America Great Again" means you won't be around long enough to see it.
Posted by Zandar Permalink 4:00:00 PM No comments:

As Chuck Pierce reminds us, the biggest media falsehood over the last several years that doesn't personally involve Barack Obama is the idiotic notion that GOP House Speaker Paul Ryan is some sort of policy wonk.


I had thought that the burlesque comic opera The Agony of Paul Ryan, Genius had closed on the night in 2012 when Joe Biden laughed the zombie-eyed granny starver off the stage during their debate. (That was the night that Ryan demonstrated that he knew it snowed in Afghanistan in the winter.) But I had not reckoned with his many fanboys among the kept political press. He ascended to become Speaker of the House, largely because nobody else wanted the job after John Boehner got kicked to the curb by the crazy people.

Now he is out there pimping the dungheap that is the new healthcare reform bill as though Mitch and Murray from downtown were lighting his pants on fire. He even lost the suit coat and broke out the PowerPoint on Thursday. It was like watching something on cable access late at night, or a flop-sweaty rookie substitute teacher, and it was hilarious—except for the parts where people will lose their health insurance and die, of course. And this is what he said and, peace be unto Dave Barry, I am not making it up, either:

Paul Ryan said that insurance cannot work if healthy people have to pay more to subsidize the sick.

This is literally how all insurance works. If someone's house burns down, some of your fire insurance money goes to help that person rebuild. If someone gets sick, some of your premium, healthy person, goes toward that person's coverage. Increasingly, I have come to believe that Paul Ryan is a not particularly bright creature from another world. Let us see if we can explain this to the lad.

Let's say that, in 1986, a 16-year-old lad loses his father to a sudden heart attack. Despite the fact that the family's construction firm is relatively prosperous due to its generous share of government contracts, the family's finances are considerably straitened. For the next two years, the young man and his mother receive Social Security survivor's benefits. Of course, these came from millions of people who had Social Security withheld from their paychecks and whose fathers did not die young due to a sudden heart attack. One of them was, say, a 32-year-old sportswriter for the Boston Herald, who had Social Security withheld from what he was paid to watch the Red Sox blow the '86 World Series, and whose father was still alive, but slipping fast into Alzheimer's. Some of his money went to make sure Paul Ryan could complete high school and go on the college and get the BA in economics that made him the smartest man in the world.

Pierce is right, of course.  The entire point of insurance is that healthy people who pay premiums help subsidize sick people (who also pay premiums).  The Law of Large Numbers states that as long as you have enough healthy people paying in, the system works.  It's not the best deal for the healthy people, but then again you never know if a car accident, cancer, or a pregnancy (hey those cost money too) is around the corner.  You're healthy now.  Eventually you won't be.

What Ryan's trying to do is tell people "Well that's not fair!  And our plan will fix that!"  Well yes, it'll "fix" that, by wrecking the entire concept of health insurance, turning it from "helping sick people" to "lowering costs because dead people don't really need health care."

This is kind of a basic thing here but surprise, Republicans want to wreck it in favor of tax cuts for wealthy people.  Actual health care doesn't matter, but tax cuts, well.

And so it goes.  Hey, we voted for them. Now we're getting what we deserve.
Posted by Zandar Permalink 10:00:00 AM No comments: