Two-thirds of states are lifting COVID-19 restrictions this month as governors give in to pressure from Trump, business groups, and oh yeah, domestic terrorists who want to use violence because they refuse to wear masks.

A Colorado man arrested after federal agents allegedly discovered pipe bombs in his home had also been helping organize an armed protest demanding the state lift its coronavirus restrictions, an official briefed on the case tells ABC News.

FBI and ATF agents served search warrants Friday morning at the Loveland, Colorado, home of Bradley Bunn, 53. Agents discovered four pipe bombs and potential pipe bomb components inside the house, according to a press release from the office of U.S. Attorney for Colorado Jason Dunn.

It is not clear what, if anything, Bunn planned to do with the pipe bombs, the official said.

Bunn came to the attention of law enforcement after using social media to encourage people to bring assault rifles to a planned May 1 rally at the Colorado capitol building, ABC News has learned.

In the days leading up to the protest, investigators discovered social media posts described as angry and aggressive, the official said. Soon after, investigators received information that he was in possession of pipe bombs. Bunn was arrested before he could attend Friday’s rally.


And yes, governors are now folding on social distancing and closures because one, they need the tax revenue (because Senate Republicans refuse to help states and local governments) and two, people are getting killed over stupid things like this as the chaos gets worse.

The Genessee County Prosecutor's office said Monday afternoon that a Flint Family Dollar security guard who was killed on Friday was shot following a dispute with a customer who would not put on a mask in the store.

The 43-year-old security guard was shot Friday afternoon at the Family Dollar on Fifth Ave in Flint. He was pronounced dead at the hospital.

Police have not released his name but MLive has identified him as Calvin “Duper” James Munerlyn. According to family members MLive spoke with, including Calvin's wife, Latryna Sims-Munerlyn, she was told the shooting was over Calvin's instructions to a customer to wear a mask.

Michigan State Police Lt. Davi Kaiser said Sunday that law enforcement was looking into the possibility that an argument over a mask led to the shooting.

It is required to wear a mask when in an enclosed public space, per Governor Gretchen Whitmer's executive order issued on April 24 to combat the spread of coronavirus.

There are no punitive charges for disobeying the order but stores can refuse service to customers to protect the public and employees.


Shot and killed because he said "no, wear a mask, protect yourself and others."

It's going to be bad, folks.

May is going to be a charnel house, and nobody knows that better than the actual pandemic experts that exist in the Trump regime.


As President Trump presses for states to reopen their economies, his administration is privately projecting a steady rise in the number of cases and deaths from the coronavirus over the next several weeks, reaching about 3,000 daily deaths on June 1, according to an internal document obtained by The New York Times, nearly double from the current level of about 1,750.

The projections, based on government modeling pulled together in chart form by the Federal Emergency Management Agency, forecast about 200,000 new cases each day by the end of the month, up from about 25,000 cases now.

The numbers underscore a sobering reality: While the United States has been hunkered down for the past seven weeks, not much has changed. And the reopening to the economy will make matters worse.

“There remains a large number of counties whose burden continues to grow,” the C.D.C. warned.

The projections confirm the primary fear of public health experts: that a reopening of the economy will put the nation right back where it was in mid-March, when cases were rising so rapidly in some parts of the country that patients were dying on gurneys in hospital hallways as the health care system grew overloaded.

“While mitigation didn’t fail, I think it’s fair to say that it didn’t work as well as we expected,” Scott Gottlieb, Mr. Trump’s former commissioner of food and drugs, said Sunday on the CBS program Face the Nation. “We expected that we would start seeing more significant declines in new cases and deaths around the nation at this point. And we’re just not seeing that.”

On Sunday, Mr. Trump said deaths in the United States could reach 100,000, twice as many as he had forecast just two weeks ago. But his new estimate still underestimates what his own administration is now predicting to be the total death toll by the end of May — much less in the months that follow. It follows a pattern for Mr. Trump, who has frequently understated the impact of the disease.

Mr. Gottlieb said Americans “may be facing the prospect that 20,000, 30,000 new cases a day diagnosed becomes the new normal.”

While the country has stabilized, it has not really improved, as shown by data collected by The Times. Case and death numbers remain stuck on a numbing, tragic plateau that is tilting only slightly downward.

At least 1,000 people with the virus, and sometimes more than 2,000, have died every day for the last month. On a near-daily basis, at least 25,000 new cases of the virus are being identified across the country. And even as New York City, New Orleans and Detroit have shown improvement, other urban centers, including Chicago and Los Angeles, are reporting steady growth in cases.

The situation has devolved most dramatically in parts of rural America that were largely spared in the early stages of the pandemic. As food processing facilities and prisons have emerged as some of the country’s largest case clusters, the counties that include Logansport, Ind., South Sioux City, Neb., and Marion, Ohio, have surpassed New York City in cases per capita.


Understand that this is the nightmare scenario that all the experts have been predicting for months now, where small city and rural hospitals around the country are inundated, and that raises the mortality rate significantly.  We are headed that way right now, in a matter of weeks, not months. Under no circumstances should states be reopening anything. 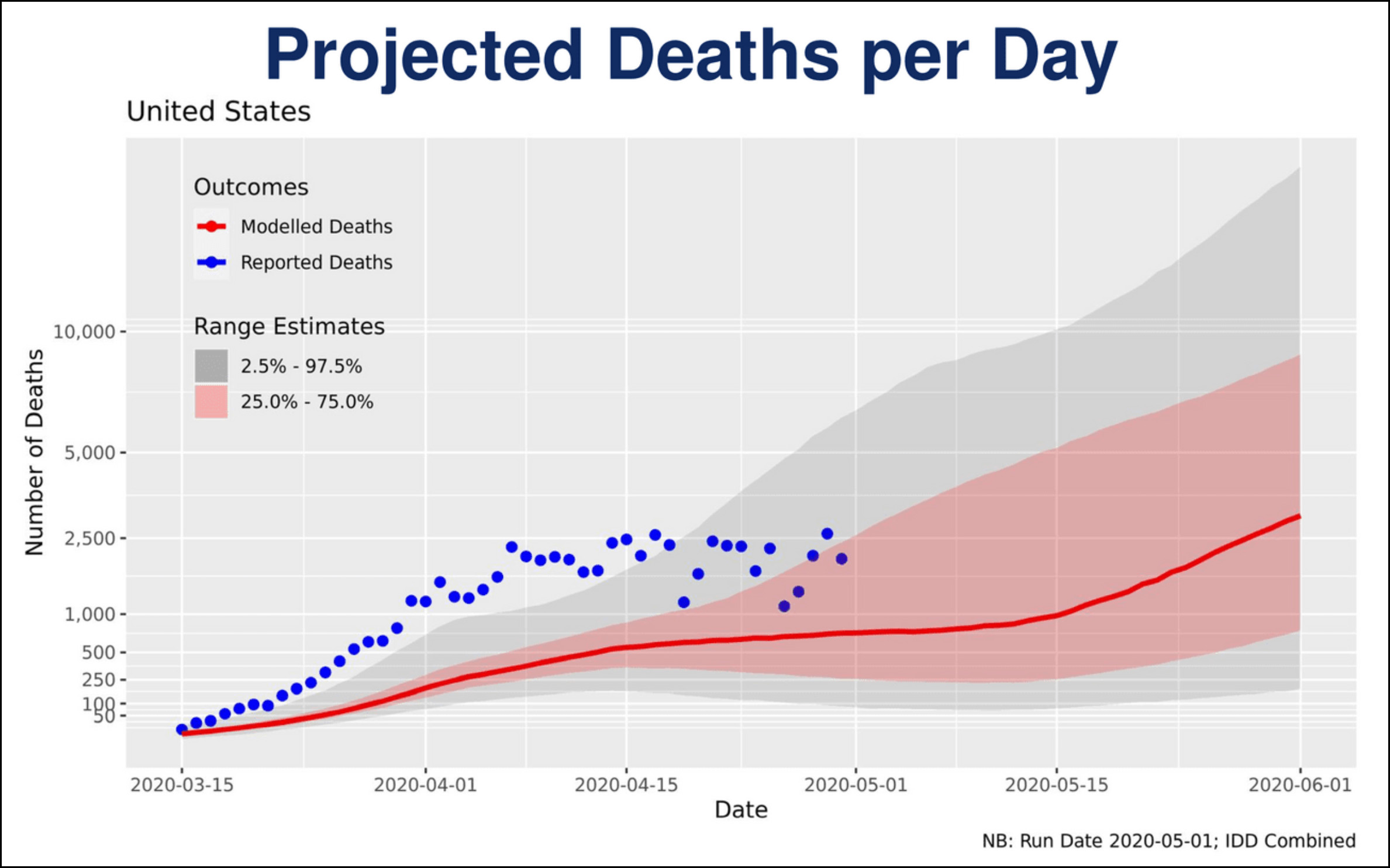 200,000 cases per day means 10,000 dead per day 7-14 days later.  It will be absolute chaos. reopening the economy now is only guaranteeing a massive spike in cases and deaths, and an economic crash into depression.  As I said before, I guess it's going to take hundreds of thousands of deaths until Americans get it through their thick skulls.

Steve M sums it all up (emphasis his):

I think many Americans won't be able to grasp this because it's close to unthinkable, but let me restate what's being reported here: The president of the United States, who has been incessantly cheerleading for a reopening of the economy, is doing so even though his own administration's model is informing him that this will significantly increase the number of people who are sickened and killed by the coronavirus. President Trump is not crossing his fingers and hoping that the reopenings take place with few bad consequences. President Trump is choosing to kill innocent American citizens.

Trump will not be impeached for this, or for anything else between now and the end of his term in January 2021. But knowingly and willfully causing the deaths of tens of thousands of Americans is an offense worthy of impeachment and removal from office.


And as bad as May will be?

June will be far, far worse.
Posted by Zandar Permalink 4:00:00 PM No comments:

Who Was That Masked Man?

Ohio GOP Gov. Mike DeWine is dropping requirements that residents wear masks when out and about, rather it's become a "strong suggestion". Kentucky Democratic Gov. Andy Beshear is following suit, wanting residents to wear masks starting May 11, but it won't be enforced in any way.

Ohio Gov. Mike DeWine (R) explained his decision to rescind an order requiring people to wear face masks in retail stores, stating on ABC's "This Week" on Sunday that it "became clear to me that that was just a bridge too far. People were not going to accept the government telling them what to do."

Why it matters: DeWine has earned praise for his aggressive and early steps to mitigate the impact of the coronavirus in Ohio, such as closing schools before any governor in the country and postponing the state's March 17 primary.

His decision to reverse himself on the face mask requirement reflects a challenge that dozens of governors are navigating as they attempt to enforce public safety measures while not angering their constituents by overstepping.

What he's saying: "We put out dozens and dozens of orders. That was one that it just went too far. But at the same time we pulled that back, I said that, look, this is highly recommended."

DeWine added that wearing a mask in retail stores — if customers are able — is the "kind thing" to do in order to keep store workers and fellow customers safe.

And I guarantee you 90% of people will ignore it.

I just don't know what people expect.  We're still seeing 2,500-3,000 deaths per day and while the death toll is dropping in NYC, it's rising pretty much everywhere else.  People are just giving up and pretending it's all over.