Last Call For Total Eclipse Of The Brain

They told Trump not to look directly into the sun without special glasses during today's eclipse, so naturally... 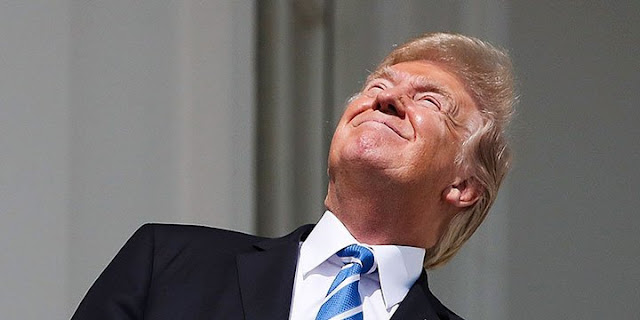 ...he looked right into the goddamn sun without his special glasses.

You can't tell a clinical narcissist not to do something, you know.
Posted by Zandar Permalink 9:44:00 PM No comments:

Email ThisBlogThis!Share to TwitterShare to FacebookShare to Pinterest
StupidiTags(tm): Scientific Stupidity, Trump Regime, WHAT IS THIS I DON'T EVEN, Wingnut Stupidity

Trump And The US Secret Servants

It seems the US Secret Service has reached its yearly manpower budget limit for Trump's detail and there's still months to go, the payroll is exhausted due to all those golfing trips Donny Boy takes, turns out.  And while Donald seems to be convinced that the USSS stands for "United States Security Servants", the people protecting him are pretty much fed up with their "principal".


The Secret Service can no longer pay hundreds of agents it needs to carry out an expanded protective mission – in large part due to the sheer size of President Trump's family and efforts necessary to secure their multiple residences up and down the East Coast.

Secret Service Director Randolph "Tex'' Alles, in an interview with USA TODAY, said more than 1,000 agents have already hit the federally mandated caps for salary and overtime allowances that were meant to last the entire year.

The agency has faced a crushing workload since the height of the contentious election season, and it has not relented in the first seven months of the administration. Agents must protect Trump – who has traveled almost every weekend to his properties in Florida, New Jersey and Virginia – and his adult children whose business trips and vacations have taken them across the country and overseas.

"The president has a large family, and our responsibility is required in law,'' Alles said. "I can't change that. I have no flexibility.''

Alles said the service is grappling with an unprecedented number of White House protectees. Under Trump, 42 people have protection, a number that includes 18 members of his family. That's up from 31 during the Obama administration.

Overwork and constant travel have also been driving a recent exodus from the Secret Service ranks, yet without congressional intervention to provide additional funding, Alles will not even be able to pay agents for the work they have already done.

The compensation crunch is so serious that the director has begun discussions with key lawmakers to raise the combined salary and overtime cap for agents, from $160,000 per year to $187,000 for at least the duration of Trump's first term.

But even if such a proposal was approved, about 130 veteran agents would not be fully compensated for hundreds of hours already amassed, according to the agency.
"I don't see this changing in the near term,'' Alles said.

Both Republican and Democratic lawmakers expressed deep concern for the continuing stress on the agency, first thrust into turmoil five years ago with disclosures about sexual misconduct by agents in Colombia and subsequent White House security breaches.
A special investigative panel formed after a particularly egregious 2014 White House breach also found that that agents and uniform officers worked "an unsustainable number of hours,'' which also contributed to troubling attrition rates.

While about 800 agents and uniformed officers were hired during the past year as part of an ongoing recruiting blitz to bolster the ranks, attrition limited the agency's net staffing gain to 300, according to agency records. And last year, Congress had to approve a one-time fix to ensure that 1,400 agents would be compensated for thousands of hours of overtime earned above compensation limits. Last year's compensation shortfall was first disclosed by USA TODAY.


So yeah, there are agents basically working for free because after several years of USSS screw-ups during the Obama years, we've now got the oversight pendulum so far in the other direction that Trump basically gets to abuse them.

The real issue of course remains the graft this represents.  The reason why the USSS has reached its limits is because Trump is making them pay for his golf clubs, his hotel services, his NYC tower, you name it. This needs to stop, but it won't because the GOP Congress won't lift a finger.

We already know they're cowards, but this is just stupid.

Over the weekend the world lost not one but two comedy greats, with over a century of combined work between them.  First, legendary civil rights activist, author, satirist and stand-up comedian Dick Gregory passed at the age of 84.


Comedian and civil rights activist Dick Gregory, who broke barriers in the 1960s and became one of the first African-Americans to perform at white clubs, died Saturday.

Gregory recently rescheduled an event in Atlanta because he was hospitalized. He died in Washington, his son posted on social media without giving details.

"The family appreciates the outpouring of support and love, and respectfully asks for their privacy as they grieve during this very difficult time," Christian Gregory said. "More details will be released over the next few days."

Gregory satirized segregation and racial injustice in his acts, and was arrested several times in the 1960s for joining civil rights rallies.


Dick Gregory paved the way for pretty much every black comedian in America these days, from Cosby to Chappelle, from Pryor to Rock and everyone in between.  He was also a prolific author and activist and spoke out on injustice up until his death.  Comedy, sometimes biting and savage, sometimes subtle and thought-provoking, was his weapon of choice to change American hearts and minds.  If you can make a person laugh, you can make them understand a lot of things.  Dick Gregory will sorely be missed.

The other comedic legend that left us this weekend was none other than the legendary Jerry Lewis, who I had more than a few issues with.

Jerry Lewis, the brash slapstick comic who became a pop culture sensation in his partnership with Dean Martin and then transformed himself into an auteur filmmaker of such comedic classics as “The Nutty Professor” and “The Bellboy,” has died in Las Vegas. He was 91.

Lewis died at his home in Las Vegas at about 9:15 a.m. Sunday morning, his agent confirmed.

For most of his career, Lewis was a complicated and sometimes polarizing figure. An undeniable comedic genius, he pursued a singular vision and commanded a rare amount of creative control over his work with Paramount Pictures and other studios. He legacy also includes more than $2.5 billion raised for the Muscular Dystrophy Association through the annual Labor Day telethon that he made an end-of-summer ritual for decades until he was relieved of the hosting job in 2011.

But Lewis’ brand of humor did not always wear well as times and attitudes changed. Over the last 10 years of his life, his reputation soured slightly as he was forced to apologize for making a gay slur on camera during the 2007 telethon, continued to make racist and misogynistic jokes, and didn’t hesitate to share his right-wing political views.


Lewis too paved the way for a lot of comics, and there's no doubt his work and his charity left a huge mark on the world, but it also left a darker stain because of his problems.  He was definitely a product of his age, and a world with President Obama didn't exactly sit well with him and he made damn sure everyone knew it.

In a way, Gregory and Lewis were opposites.  Sometimes humor can change minds for the better, and sometimes it can be hurtful.  That they both passed on the same day is about as American as coincidences get.