Last Call For Don't Like It, So Sue Me

How long before Orange Julius and company are forced by the Tea Party to take this tack against President Obama?

Republican lawmakers bashed the Obama administration at a House Judiciary Committee hearing Tuesday for opting not to enforce core parts of the Affordable Care Act, such as minimum requirements for individual healthcare plans.

Rep. Trent Franks (Ariz.), the chairman of the Judiciary panel’s Constitution and Civil Justice subcommittee, said Congress should sue the administration to spur Obama to enforce the healthcare law as written.

“I think that’s the only choice we have, and that’s not just on ObamaCare, that’s on a host of different things,” Franks told The Hill.

“He simply embodies a breathtaking arrogance that ignores the law he’s sworn to uphold.”


Remember, these were the same guys that thought the Bush/Cheney "plenary executive" was awesome, and that the President could basically do whatever he wanted.  Now that Obama is in the White House, note the key word "arrogance" that Trent Franks uses.  That Obama boy, he's uppity.  Gotta be brought down, gotta be put in his place, so we're going to sue him on every executive decision we don't like.  At the very least, the plan is to get a federal judge to tie up Obamacare in the courts again until the President is out of the White House.

I'm betting this happens and soon.

On the other hand, Republicans do have a plan B if this doesn't work.

At Tuesday’s hearing, the committee chairman, Bob Goodlatte (R-Va.), accused Obama of “picking and choosing which laws to enforce” and of being “the first president since Richard Nixon to ignore a duly enacted law simply because he disagrees with it.”

The majority’s witnesses added to the accusations. George Washington University’s Jonathan Turley said Obama had “claimed the right of the king to essentially stand above the law.”

This excited Franks, who embraced impeachment back in 2011. Obama’s actions, he said, “could be considered royal prerogatives, which is, if my history’s right, what we had that little unpleasantness with Great Britain about.”

Yikes! Why bother with impeachment? They need a revolution.


But of course, Republicans are rational actors in this scenario, and not complete lunatics.

In a pretty awful decision, the federal judge in charge of Detroit's bankruptcy case has ruled that in spite of the state's constitution specifically preventing pension cuts to resolve bankruptcies, city workers and retirees now face the axe for the unpardonable sin of being government employees.


U.S. Bankruptcy Judge Steven Rhodes ruled today that pensions of city retirees can legally be cut in Detroit’s bankruptcy — a decision that came as a significant surprise to people observing the case.

Rhodes emphasized he won’t necessarily allow pension cuts to be approved in the city’s final reorganization plan, called a “plan of adjustment.”

Rhodes previously signaled that he planned to decide the issue of whether the pensions can be cut later in the case. But today he said he changed his mind and decided ruling on the issue now would expedite the bankruptcy.

Almost immediately afterward, Michigan Council 25 of AFSCME, the city's largest employee union, filed an appeal to the U.S. District Court for the Eastern District of Michigan. The union also plans to ask Rhodes to allow the case to be sent directly to the 6th Circuit Court of Appeals to expedite the case.


So the only question now is how much will Detroit's city workers be made to suffer.  Of course, that's the entire point:  a shot across the bow of what little worker union power is left in a country built by unions to let them know that if you spent your career working for a local or state government, that local or state government doesn't have to keep its word and will come for your pension, health benefits, and everything else.

You're not an employee, after all.  You work at the sufferance of the mob that believes government workers are parasites who can have everything taken from them by enough angry taxpayers, looking to take their own private sector miseries in an at-will, right-to-work employee world out on whomever they can lash out at the easiest.

After all, if your boss can take everything from you without warning or any hope of redress, why should "those people" not suffer the same fate when you, as a taxpayer, are their boss, right?

Because unions are the bad guys here, you see.  We should all be equally miserable with declining real wages, fewer benefits, longer hours and less worker safety like real 'muricans, dammit.
Posted by Zandar Permalink 4:00:00 PM No comments:

The choking, near blood-boiling irony of that title and first sentence coming from somebody as colossally ignorant as Peggy Noonan, a person who backed George W. Bush for 8 years, basically prevented my brain from reading any further.  If you guys want a crack at it, go for it.  Frankly, I have no desire to finish it because I know it will confirm my view that Peggy Noonan is about as condescendingly polite as racists can get, and I have no desire to anger myself at something I've seen all too often in my life.

Steve M. has some much-needed perspective at No More Mister Nice Blog:

A president who stakes his entire reputation on a complex scheme gone awry? And who never rides herd on the people who were supposed to make sure it went right? 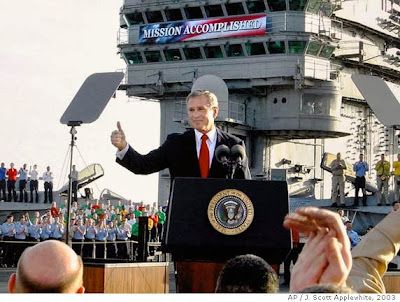 That 8-year selective amnesia about the guy before Obama is a funny thing.
Posted by Zandar Permalink 10:00:00 AM No comments: