Last Call For That Poll-Asked Look

That's worrisome -- but please note that the poll claims Clinton would beat Trump among Hispanics by only 17 points, 52%-35% (13% undecided). That would mean that Trump would do better among Hispanics than Mitt Romney did in 2012 (Barack Obama beat Romney71%-27%). Show of hands: Who (outside of Trump Nation) seriously thinks this will happen? (The recent Latino Decisions poll put the Clinton-Trump margin at 76%-11%, which seems realistic given the 2012 numbers and Trump's rhetoric.)

Only 5% of Battleground Poll poll respondents were Hispanic; 77% were white and 12% black. That's a serious underrepresentation of Hispanics and overrepresentation of whites (Hispanics were 10.8% of the 2012 electorate, while whites were only 71.1%; the white portion of the electorate is expected to drop to 69% this year).


Yeah, I'm not buying this either.  Trump doing that well among Millennials is highly suspect, but Trump doing better than Romney among Hispanic voters is complete and total hogwash.

If you believe this poll, Clinton would be ahead in California, New York, Florida...and is ahead in Texas 45-36% with 19% undecided, so you tell me how accurate it is. 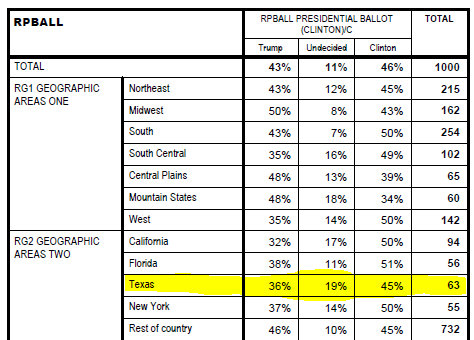 Oh, and the Millenial stuff: 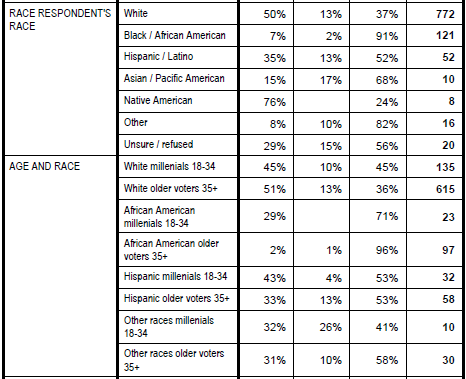 Again, Trump on the left column, Clinton on the third column, so unless you think Trump and Clinton are in a dead heat on white Millennial voters (and not even I think white people younger than me are that stupid) and within ten points on Hispanic Millennials when Trump literally wants to deport millions of Hispanic Millennial DREAM Act beneficiaries, then this is nonsense.
Posted by Zandar Permalink 9:11:00 PM No comments:

The Primary That Matters Today

One of the bigger contests today is the Democratic Maryland Senate primary race between Rep. Donna Edwards and Rep.Chris Van Hollen to replace retiring liberal Dem Sen. Barbara Mikulski, and yes for once The Hill's headline is right: one of these two is going to suffer a big loss today.

One lawmaker will see a fruitful congressional career come to a screeching halt with a primary loss and be left to face an uncertain political future. The other will be a big favorite to win a November promotion and become a fixture in the upper chamber, where Maryland hasn’t been represented by a Republican in three decades.

The race has intensified over the last several weeks, and Monday was no exception, with the Edwards campaign calling Van Hollen “a business-as-usual Washington insider.”
The candidates, who are both 57, spent Monday on a final whirlwind campaigning blitz that brought them to schools, diners, senior centers, bustling Metro stations and sleepy neighborhood streets for a last-minute door-knocking effort.

“You’ve got to run hard across the finish line,” Van Hollen told The Hill after meeting voters at the Harford Senior Center.

The race has been much closer than initially expected. Van Hollen is the more prominent figure, with a longer congressional resume; he’s a budget gladiator and de facto leader who has close ties to House Minority Leader Nancy Pelosi (D-Calif.); and he boasts a big cash advantage, outraising Edwards by almost $5 million, according to the Federal Election Commission.

But Edwards has been a force in her own right. She was tapped by Pelosi to co-chair the Democratic Steering and Policy Committee; she’s won endorsements from powerful groups like EMILY’s List that have spent heavily to promote her campaign; and in an election year that might send the first woman to the White House in the form of Hillary Clinton, Edwards, a single mother, is hoping to ride those coattails to become just the second African-American woman elected to the Senate in history.

Edwards’s campaign on Monday expressed confidence that voters will side with “someone ... who understands their lives.”

“We are making sure everyone we contact knows the choice they face, between a business-as-usual Washington insider looking for a promotion, or a bold change-maker who will fight every day for everyday Marylanders just like Barbara Mikulski,” spokesman Benjamin Gerdes said in an email.

Several recent polls have shown Van Hollen gaining an edge, including a Monmouth University poll released last week that has him up by 16 points. But earlier surveys had Edwards ahead, and many observers expect Tuesday’s contest to be a nail-biter.

“There’ve been all kinds of conflicting polls,” Rep. John Delaney (D-Md.) told The Hill recently. “The only conclusion you can draw from the polls is that it’s a close race.” Like Mikulski, Delaney has remained neutral in the contest.


Of the two, Edwards has been the most liberal and the candidate I hope to see carry on Maryland's strong blue tradition in the Senate.  Van Hollen is somewhat too close to DNC chair Debbie Wasserman Schultz for my taste, and we all know by now how I feel about her.

Van Hollen will win unless Baltimore turns out big for Edwards.  We'll see.
Posted by Zandar Permalink 4:00:00 PM No comments:

How Bitter Will Bernie's End Be?

With contests in Pennsylvania, Connecticut, Maryland, Delaware and Rhode Island today and 462 delegate up for grabs for the Democrats, it looks like Hillary Clinton is about to slam the door in Bernie Sanders's face, and as Greg Sargent notes, Team Bernie is heading for the exits.

All the latest polls suggest that Hillary Clinton is heading for sizable wins in delegate-rich Pennsylvania and Maryland tomorrow, which probably means that scrutiny of Sanders’s true intentions for the endgame of the nomination process will only intensify.

But it’s now becoming obvious that Sanders is, if anything,ratcheting down expectations for this endgame. One potentially key tell was on display in the four interviews that Sanders gave yesterday to the Sunday Shows: One on ABC, one on CBS, one on NBC, and one on CNN.

But this appears less ambitious than what Sanders telegraphed only a week ago. Last Sunday he was asked directly whether he would take the contest “all the way to the floor in Philadelphia,” and he replied: “Yup.” Last week Sanders campaign manager Jeff Weaver flatly stated: “We’re going to go to the convention.”


That's definitely a step backwards for the Sanders campaign, and it's coming from Sanders himself, in four different interviews on Sunday.  That's not accidental.

Of course, one cannot dismiss the possibility that Sanders might still try to battle for the nomination on the convention floor. But all of the above is much more consistent with an endgame in which Sanders fights on until the voting is completed, makes one last push for super-delegates to switch, discovers they aren’t willing to do so, and then enters into serious unity talks over how he might influence the convention proceedings and the Democratic Party’s agenda in the fall campaign.

At that point, the question of how the Clinton campaign, not just the Sanders campaign, handles the conclusion to this whole process will play a big role in influencing what happens. It’s still unclear whether the Clinton camp will see a need to make any concessions to Sanders in order to win over his supporters and unite the party. But it will be in the interests of Clinton and the Democratic Party to ensure that this process goes as smoothly as possible. They’ll likely conclude that there is greater risk in not making any meaningful gestures towards unity than in making them. What this might look like is the subject of a future post.

She could get that with 276 delegates up for grabs in May in Indiana, West Virginia, Guam, Oregon, and yes, here in Kentucky.

In other words, Clinton could very well have the 2,383 delegates she needs before California and New Jersey on June 7.  So unless you think Bernie will somehow magically get 100% of the California vote, he's done.

Frankly, this race was over back on Super Tuesday on March 15.

So let's get on with the cleanup stage so we can take out the GOP, guys.
Posted by Zandar Permalink 10:00:00 AM No comments: