Last Call For Everyone But Me

As if it was ever going to happen, Donald Trump completely ignored his own complicity in last weekend's deadly mass shootings in El Paso and Dayton and instead blamed video games, mental illness, and the media.


President Donald Trump focused on internet radicalization and mental illness in an address to the country on Monday, characterizing the mass shootings in El Paso, Texas, and Dayton, Ohio, over the weekend as a product of isolated evil mixed with mental illness.

Apart from promises to direct resources to improving mental health resources for isolated and troubled people and identifying warning signs from potential mass shooters, Trump also called for an end to “the glorification of violence in our society,” with a focus on “gruesome and grisly” video games. “It is too easy for troubled youths to surround themselves with a culture of violence,” he said. “Cultural change is hard, but each of us can choose to build a culture that celebrates the inherent worth and dignity of every human life.”

Trump also had two slightly more aggressive proposals. He suggested he would promote increased use of involuntary commitment in certain cases of mental illness, and he said he was looking to encourage the death penalty in mass shootings. “I am directing the Department of Justice to propose legislation ensuring that those who commit hate crimes and mass murders face the death penalty, and that this capital punishment be delivered quickly, decisively, and without years of needless delay.”

Trump didn’t entirely dismiss the issue of firearms: He did propose national red flag laws—those that allow police or family members to request that law enforcement confiscate firearms from people who may prove a danger to themselves or others—in the speech. But he did not revisit his promise made online earlier that morning to support “strong” background checks.

The speech hit some traditional notes in moments of tragedy: Trump called for bipartisanship and sent condolences to the two American cities, as well as to the Mexican president, for the loss of lives. But he also fixated on the language of violence, with phrases such as “twisted monster,” “barbaric slaughters,” and “evil contagion.” He also called the violence “domestic terrorism,” though he fell short of linking the terrorism to race.

He did mention the white supremacist manifesto written by the El Paso shooting suspect that echoed some of Trump’s rhetoric on immigration. In the four-page screed, the suspected gunman confessed an intense hatred toward Hispanics and immigrants, whom he blamed for “cultural and ethnic replacement brought on by an invasion.” In his remarks Monday, Trump described the El Paso gunman as being “consumed by racist hate” and called for the country to condemn racism and bigotry. “Hatred warps the mind, ravages the heart, and devours the soul,” he said.

As a strange conclusion to his speech, Trump offered his condolences to the victims’ families, and, confusingly, wished that “God bless the memory of those who perished in Toledo”—a city 150 miles away from Dayton.


So Trump wants an end to violent video games, and oh yes, it's time to lock up the mentally ill, because that's never been a problem in US history.

Meanwhile, he just keeps on going naming new targets for his brownshirts to gun down. 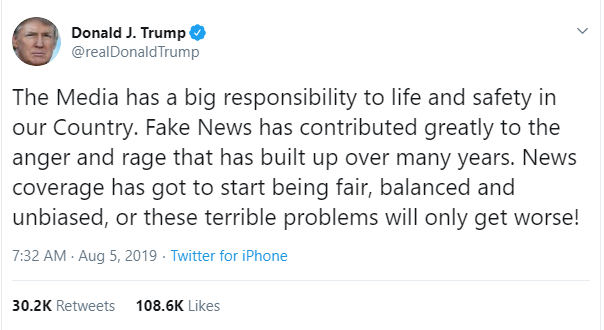 He just keeps getting worse.
Posted by Zandar Permalink 9:30:00 PM No comments:

Return Of The Blue Wave, Con't

House Republicans in Texas are now flooding for the exits as Texas's dozen or so suburban districts are bluing up faster than a chameleon in the Danube.

The growing exodus -- or "Texodus," as Democrats have gleefully characterized the parade of departures -- both reflects and accelerates the GOP's fading grip on Texas. Three of the retirements come in highly competitive districts that Democrats have a good shot of flipping.

Marchant, R-Coppell, hung onto his seat with just 50.6% of the vote last fall. So his exit, made official on Monday, likely makes it harder for Republicans to regain control of the House next year after getting clobbered in last year's midterm elections.

The Republican, who will serve out the remainder of his term, said he was looking forward to spending more time with family after a four-decade career in public office that's seen him serve as a Carrollton mayor and city councilman, a state representative and a member of Congress.

"What a wonderful opportunity it has been to serve them," he said in a news release, referring to his constituents. "I want to thank them for trusting in me."

A number of Democrats had already lined up to run in the district, which covers large sections of Dallas and Tarrant counties and includes Dallas-Fort Worth International Airport. On the GOP side, speculation quickly focused on former Irving Mayor Beth Van Duyne. She posted on Facebook that Friday was her last day as regional director for the U.S. Department of Housing and Urban Development.


And the near-misses for House Dems in 2018 are second chances in other states in 2020 too.

J. D. Scholten, a Democrat who nearly toppled Representative Steve King of Iowa in a heavily Republican district in 2018, announced on Monday that he would run again for the seat in 2020. His decision sets up a possible rematch with Mr. King, whose history of racist remarks has made him a pariah among Republican leaders, though not always with voters.

“Last time, we were hoping to win,” Mr. Scholten said in an interview before the announcement. “Now, we are expecting to win. We know how to do it.”

Mr. King was stripped of his congressional committee assignmentsthis year by House Republicans, after he questioned why white nationalism was offensive. He later said he had nothing to apologize for and would run in 2020 for a 10th term in his deeply conservative district in northwest Iowa.

If he survives a primary challenge next year, Mr. King will appear on the same ballot as President Trump, whose nativism and anti-immigrant remarks Mr. King long foreshadowed. In Mr. King’s Fourth District, which Mr. Trump won by nearly 30 points, voters in the past have either agreed with or overlooked Mr. King’s divisive language about Latino migrants, who sustain much of the agricultural economy there.

“Having Steve King have a voice in Congress, I think that’s at the root of why I feel it’s so important to get him out of office,” Mr. Scholten said.

Mr. Scholten, a former minor league baseball player and a fifth-generation Iowan, said he would once again crisscross the 39 counties of the largely rural district in an R.V., overnighting in Walmart parking lots, while engaging with voters about health care, agriculture and getting corporate money out of politics.

Email ThisBlogThis!Share to TwitterShare to FacebookShare to Pinterest
StupidiTags(tm): 2020 Elections, GOP Stupidity, Vote Like Your Country Depends On It, Wingnut Stupidity

The Summer Of Hell

Will Bunch is right. Donald Trump's America is hell.  It's his fault we're here.  We're in hell, and it's time to escape.


Researchers went back and looked at the counties where Trump held his 2016 campaign rallies and found those jurisdictions posted a stunning 226 percent rise in hate crimes. That paper didn’t include El Paso, which was targeted in 2019 by both the Trump campaign and a mass killer. Or Southern Ohio, where the president held a rally on Thursday. Just last week, an FBI memo said fringe conspiracy theories are becoming a domestic terrorism threat — a warning that came to life with a series of pops on Saturday morning. Now, what are we going to do about it?

“He [Trump] is a racist, and he stokes racism in this country,” said El Paso’s Beto O’Rourke, the former congressman and current 2020 presidential candidate. “It fundamentally changes the character of this country, and it leads to violence.” O’Rourke’s words were a moment of moral clarity that America so desperately needs right now. We just need a lot more.

Our intolerable state of affairs screams out for a crisis footing. We need Mitch McConnell to stop tweeting platitudinous baloney and call the Senate back from its summer recess and act on legislation that prevents gunmen from hunting human beings with weapons of warfare — a ban on military-style weapons that can kill or maim a person every second and the high-capacity magazines that feed them. If McConnell and the GOP leadership won’t hold that vote — and they won’t — then Democrats need to shut down Capitol Hill until it happens. There cannot be business as usual.

Last night, a meeting of the remarkable activists from Moms Demand Action —- the preeminent anti-gun-violence group right now — was taking place in Washington, D.C., and as news poured in from El Paso, they swarmed the White House for a candlelight (and iPhone-light) protest at White House that was powerful and profound. We should join them. All of us. People in Puerto Rico, Hong Kong, and elsewhere have taken greater risks to protest behavior that — while undeniable outrageous — arguably is nowhere near as bad as what the 45th president is perpetrating.

But the real moment of clarity as the sun rises over El Paso and Dayton is that President Trump urgently needs to resign or be impeached. Already, 120 House members have signed onto impeachment. But while the frequently cited Mueller report does lay out serious high crimes and misdemeanors, the real reason for impeachment should be Trump’s incitements to violence — which experts call stochastic terrorism — and his appeals to racism.

A president choosing to use the bully pulpit of his office to embrace racism — with the naked political goal of his own re-election — and now inspire mass murderers is the greatest abuse of American power in my lifetime, worse than the crimes of Richard Nixon’s Watergate. This is exactly why the Founders baked impeachment into the Constitution, and it’s why the 2020 election may be too long for us to wait. If things are intolerable now — and they are — take a moment to ponder how much worse things can get over the next 15 months if we continue to do nothing.


The man has a point.

A very, very good one.

Beto O'Rourke, to his credit, has an even better one. 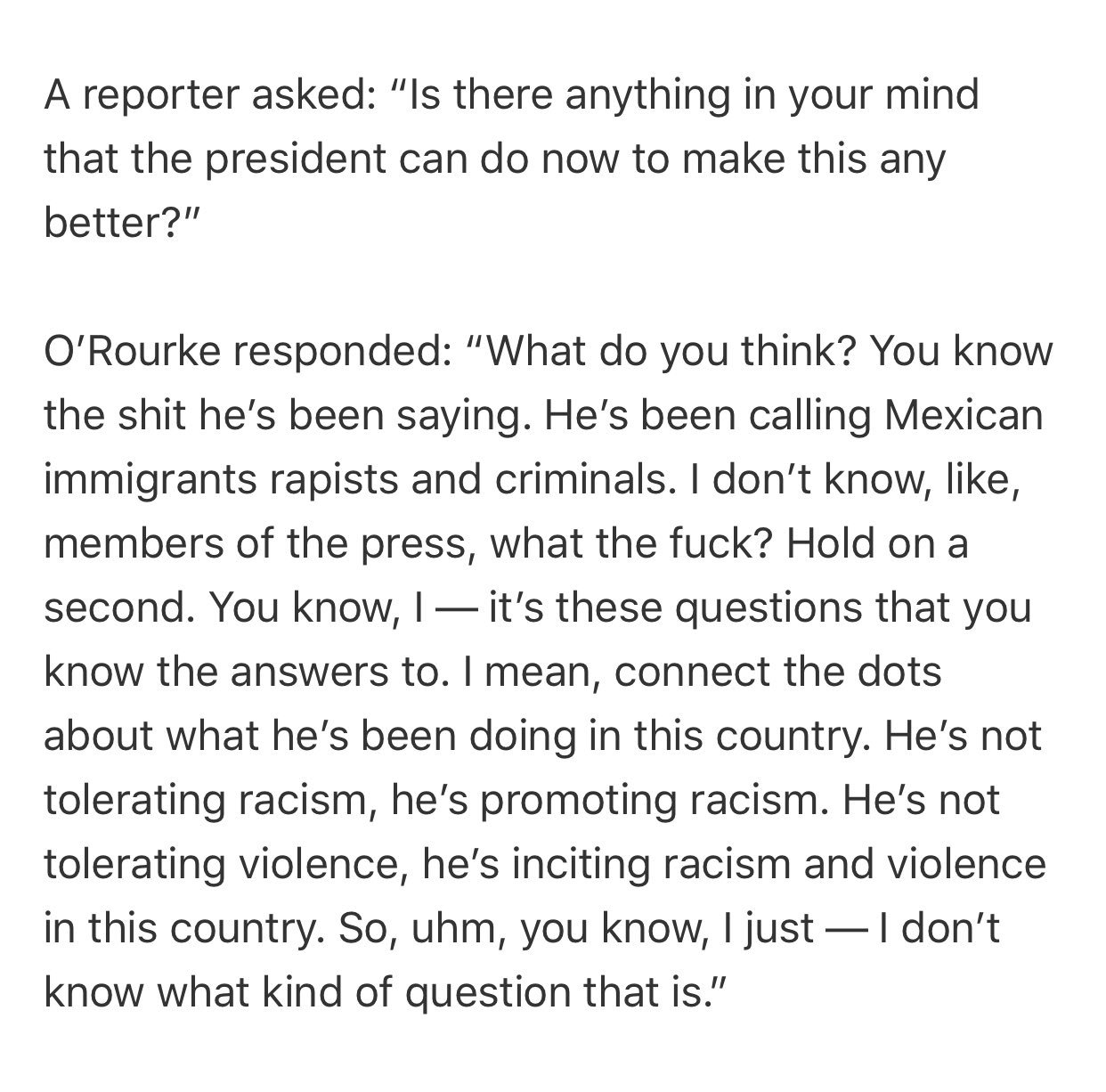 He gets points for saying what others will not, that's for sure.
Posted by Zandar Permalink 10:00:00 AM No comments: