Last Call For The Media Martyr

Don't look now, but national embarrassment and Mouth of Sauron Sean Spicer is apparently a rock star out in MAGA Country, fighting the good fight against the evil Lamestream Media or something.

In blue America, Trump’s spokesman stands accused of violating press freedoms and is the butt of jokes, lampooned on Saturday Night Live by comedian Melissa McCarthy. A woman accosted Spicer last week in a D.C.-area Apple store in a video that went viral. Rumors have swirled that the longtime Republican party operative might be replaced as press secretary and that Trump has been unhappy with his performance.

But in Nashville, Spicer was a bona fide celebrity. As he tried to make his way to the press pen to talk to reporters before the rally, a mob formed around him, with supporters shaking his hand, telling him to keep up the good work, and posing for photos. A group of five women with pink "Women for Trump" signs pushed through the crowd for a photo. "We love you Sean!" they said.

"You guys want to come to a briefing?" Spicer asked the crowd.

To Trump’s base supporters, Spicer is a crusader against what they consider an unfair and dishonest media. Vincent Kirby, 19, said he watches Spicer’s briefings with White House reporters every day. He likes Spicer’s straight talk and cheers him on when he regards reporters as attempting to trip him up over technicalities. The attacks, the criticism, the mockery -- all of it only adds to Spicer’s appeal, Kirby said.

"Some of the reporters’ questions, they are just trying to nitpick and sensationalize things -- it’s hard to take them serious," Kirby said before darting off to catch up to Spicer, who was trying to make his way through the crowd.

I really don't want to hear any more complaints about how the Obama administration was a cult of personality after reading this drivel, I really do not.
Posted by Zandar Permalink 9:04:00 PM No comments:

The King Of Wishful Stinking

As I said last week about virulently racist Iowa GOP Rep. Steve King, the problem isn't the 7-term Congressman, the problem is the people who keep re-electing him despite his obvious racism.  Des Moines journalist and WHO-TV political director Dave Price gives us this analysis of the people of King's district, IA-4, and why King will keep being sent to DC time and time again.

But there is more to King’s tells-it-like-it-is appeal. Northwestern Iowa is changing. Financially, the farm community has struggled over the past few years with commodity prices for corn and beans often falling below the cost of production. That’s helping to shrink the rural population, especially among younger people, who are increasingly looking to bigger cities like Des Moines and Cedar Rapids for better job opportunities. According to the U.S. Census, King’s home county of Crawford now has a population of about 17,000 people—about 4,000 fewer than it had in 1900.

The area had been nearly all white for generations, but that, too, has been slowly changing as more Hispanic immigrants have arrived. In 2000, the county was about 93 percent white. That’s now dropped to 82 percent, with Hispanics accounting for nearly all of the change. Eager to make a living for themselves, many newcomers have been willing to take lower-paying jobs in agriculture, manufacturing and meat-packing. And not everyone is comfortable with the changing look of schools, grocery stores and churches in town.

“There are some ‘Steve Kings’ out there,” says immigration attorney Jason Finch, who practices in Denison and nearby Storm Lake, two communities with rising immigrant populations. And he doesn’t mean it as a compliment. “I had a county attorney tell me it was his life’s mission to deport as many immigrants as he could.”

Still, Finch reckons that anti-immigrant sentiment is held by a shrinking majority in the region, and where it exists, he says, it tends to be rooted more in ignorance than racism. “The younger generation handles it a lot better than the older generation does,” Finch says.

Politically, much of King’s district is deeply conservative, with registered Republicans (nearly 200,000 of them) easily outnumbering registered Democrats (fewer than 125,000). That makes it hard for challengers to take on King, no matter how many controversial assertions he makes.

In 2012, King was tested by a genuinely tough reelection fight. His opponent was Christie Vilsack, the spouse of a popular former Democratic governor, Tom Vilsack, who would later become U.S. secretary of agriculture. King’s district had been redrawn, and was less Republican as a result. But King ended up getting a boost from Branstad, who had grown concerned with the dynamics of the race and personally sent staff to help the campaign. King won by 8 points.

The next year, as Congress debated comprehensive immigration reform, King took a stand as one of the most conservative—and controversial—voices speaking out against illegal immigration. “For every one who’s a valedictorian,” he told Newsmax, referring to young undocumented immigrants crossing the border, “there’s another 100 out there who weigh 130 pounds. And they’ve got calves the size of cantaloupes because they’ve been hauling 75 pounds of marijuana across the desert.” Iowa Republicans cringed at the words, but no prominent leader strongly denounced King at the time.

His margin of victory on election night in 2014? It was 23 points—far higher than his margin against Vilsack two years before, but just about par for the course for King. In fact, King has long crushed his competition. With the exception of 2012, he has won by at least 21 percentage points in each of his reelection bids; in 2010, the margin was 34 points.


In other words, King is in one of the safest districts in the country for the GOP, and even attempts to primary him go down in flames.

Nick Ryan understands why. Last year, Ryan, one of the state’s most well-known Republican operatives and donors, helped to orchestrate the first primary challenge King has faced since winning his seat in 2002. Ryan’s chosen candidate, State Senator Rick Bertrand, lost by 30 percentage points.


Steve King represents the people who keep voting for him.  They are no different from him, not enough to motivate them to vote for someone else.  Steve King's racism isn't the core problem.  The fact that his racism is perfectly acceptable to tens of thousands of Iowa voters every two years is. Until that changes, he'll keep his job.

Maybe Trump's proposed 30% cuts to the USDA will do it.  Who knows.  But we need to stop making excuses for the people who keep voting in racists and expecting them to stop being that way.
Posted by Zandar Permalink 4:00:00 PM No comments:

The Trump regime plans to ask the GOP-controlled Congress for tens of billions in massive, draconian cuts to domestic programs across the board in order to pay for a huge Pentagon expansion and new border security measures as the White House releases its budget proposal today.


President Trump’s budget blueprint for the coming fiscal year would slash the Environmental Protection Agency by 31 percent and cut State Department spending by a similar amount in a brash upending of the government’s priorities, according to congressional staff members familiar with the plan.

The budget outline, to be unveiled on Thursday, is more of a broad political statement than a detailed plan for spending and taxation. But it represents Mr. Trump’s first real effort to translate his bold but vague campaign themes into the minutiae of governance. The president would funnel $54 billion in additional funding into defense programs, beef up immigration enforcement and significantly reduce the nondefense federal work force to further the “deconstruction of the administrative state,” in the words of Mr. Trump’s chief strategist, Stephen K. Bannon.

Yet for all its headline-grabbing bold strokes — and the White House claims that it will reset the process of Washington policy making — major elements of the plan have already been declared dead on arrival by the Republican leadership in Congress, and much of the fiscal fine print will be filled in by Capitol Hill lawmakers and their aides over the next month.

House appropriations subcommittees began reviewing the plan late Wednesday. Among the cuts: drastic reductions in the 60-year-old State Department Food for Peace Program, which sends food to poor countries hit by war or natural disasters, and the elimination of the Department of Transportation’s Essential Air Service program, which subsidizes flights to rural airports.

The plan is a “skinny budget,” a pared-down first draft of the line-by-line appropriations request submitted by first-term administrations during their first few months. A broader budget will be released later in the spring that will include Mr. Trump’s proposals for taxation as well as the bulk of government spending — Social Security, Medicare, Medicaid and other entitlement programs.

Mr. Trump’s version is likely to be even skinnier than usual, a result of the chaos, inexperience and staffing problems encountered by the Trump White House over the first two months.

Issues with coordination plagued Wednesday’s briefing sessions: Republican communications staff members, who usually coordinate their messaging, complained that they had been given no White House guidance on its details or how to sell the plan, which covers the fiscal year that begins on Oct. 1.

In addition to the cuts at the E.P.A. and the State Department, Mr. Trump’s team is expected to propose a wide array of cuts to public education, to transportation programs like Amtrak and to the Department of Housing and Urban Development, including the complete elimination of the $3 billion Community Development Block Grant program, which funds popular programs like Meals on Wheels, housing assistance and other community assistance efforts.


House and Senate Republicans have already said that they're not going to take the fall for this, as the budget proposal is already considered DOA on Capitol Hill.  Having said that, the Trump Regime's recent executive order to restructure the entire executive branch means the White House has broad latitude to make these huge cuts effective in all but name by simply shifting priorities of what to actually do with the money.

The biggest winners and losers: 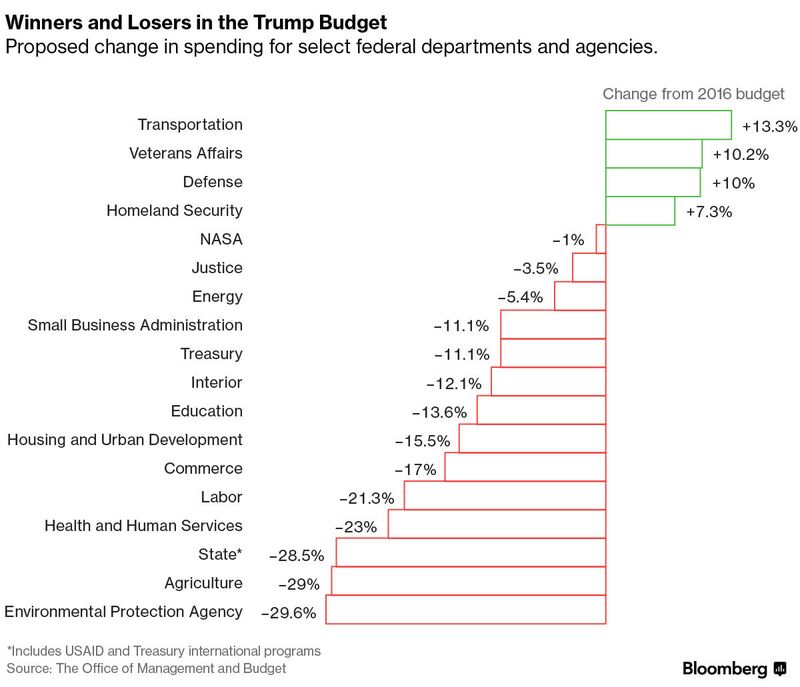 Note that the Department of Agriculture would take a massive cut under Trump, as well as state clean-up programs for the EPA, arts and science programs, energy research, and national parks.  It's a brutal austerity budget that would hurt red states as well as blue, and I can't imagine there are a whole lot of Republicans in Congress from Midwest or Mountain West states that are going to want to cut the USDA by 29%.

This is a cute document, but as with Trumpcare, Paul Ryan and Mitch McConnell are going to run screaming from this mess.  If Republicans have to take votes on these kinds of cuts, even Democrats will be able to find winning messages in 2018.