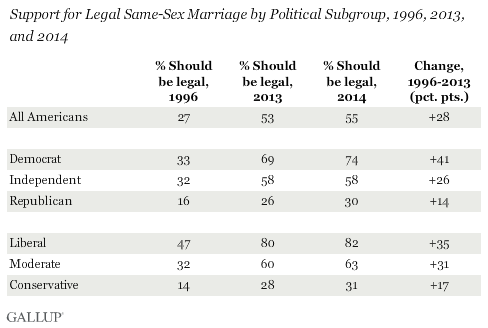 But even Republicans are staring to come around.  They don't have a choice, it seems.  We'll drag them kicking and screaming into the 21st century by the short hairs if we have to.
Posted by Zandar Permalink 9:15:00 PM No comments:

Josh Marshall noticed this one, but it's concerning the House GOP's proposed agriculture budget bill.  To the surprise of absolutely nobody, House Republicans want to scrap a successful program that gives school lunches to kids in summer school and replace it with an identical program, except for one difference:

It would only provide summer school lunches for rural counties and districts.  Not a dime for urban schools.

And in a surprising twist, the bill language specifies that only rural areas are to benefit in the future from funding requested by the administration this year to continue a modest summer demonstration program to help children from low-income households — both urban and rural — during those months when school meals are not available.

Since 2010, the program has operated from an initial appropriation of $85 million, and the goal has been to test alternative approaches to distribute aid when schools are not in session. The White House asked for an additional $30 million to continue the effort, but the House bill provides $27 million for what’s described as an entirely new pilot program focused on rural areas only.

Democrats were surprised to see urban children were excluded. And the GOP had some trouble explaining the history itself. But a spokeswoman confirmed that the intent of the bill is a pilot project in “rural areas” only.


I can't imagine why anyone would call this twist surprising, considering how Republicans feel about "urban" kids, "urban" voters, and "urban" culture.   Cause those people don't deserve lunches, that would make them parasites.  But real American kids going to summer school to improve themselves out there in farm country, well, of course they do.

Keep up the minority outreach, guys.

Well now, it seems that the ugly story about a right-wing blogger who snuck into the nursing home where Mississippi GOP Sen. Thad Cochran's wife was bedridden in order to try to create a scandal to favor Cochran's primary opponent, state Sen. Chris McDaniel, really did end up creating a real scandal.  Apparently, Cochran's people knew about the incident for two weeks before telling police.


Cochran’s campaign spokesman, Jordan Russell, told The Hill Monday that the campaign was made aware of a video allegedly taken by local political blogger Clayton Kelly of Cochran’s infirm wife on the day it was posted, April 26. He said the campaign conducted its own investigation of the video before alerting Cochran to it and deciding to bring it to an attorney.

Kelly, an apparent supporter of Cochran's GOP primary challenger state Sen. Chris McDaniel, was arrested Friday over the alleged taping, and the incident has roiled the bitter race two weeks from the election, as a new survey from a group backing McDaniel shows the race to be within the margin of error.

“We were made aware of [the video] that morning because people were emailing us saying, ‘Did you see this?’ ” Russell told The Hill. “We conducted our own review for a few days and then went to Sen. Cochran about it, and that was when the decision was made to turn it over to the attorneys.”

Russell said he wasn’t sure how long the campaign conducted its investigation, but the inquiry lasted anywhere from three days to a week before the campaign consulted Cochran’s attorney.


This smells as bad as the original story, if not worse, especially since Mississippi police are considering conspiracy charges against Clayton Kelly, the blogger in order to round up anyone who may have been part of this.

Kelly, who was arrested on Friday for breaking into the nursing home to photograph Rose Cochran, is being held in jail on a bond of $100,000 on charges related to the break-in, according to the Clarion-Ledger of Mississippi.

Officials for the Madison, Mississippi police department said they wanted to talk to other individuals who "who might have been part of a conspiracy" concerning the break-in, according to the Clarion-Ledger. Police, however, are refusing to comment any further on details of the investigation though.

Kelly, who supports Cochran primary challenger state Sen. Chris McDaniel (R-MS), was arrested late Friday for the break-in. He has been charged with exploitation of a vulnerable adult after breaking into the St. Catherine's nursing home where Rose Cochran is located.

The McDaniel campaign, despite somewhat contradictory responses, has denied any direct connection to Kelly.


This entire thing smells like week-old fish.  Maybe Democrat Travis Childers has a shot in hell at this seat after all.
Posted by Zandar Permalink 10:00:00 AM No comments:

Email ThisBlogThis!Share to TwitterShare to FacebookShare to Pinterest
StupidiTags(tm): Criminal Stupidity, GOP Stupidity, I CANNOT WITH THESE GUYS, Someone Get Me Olivia Pope On The Line, Wingnut Stupidity