Last Call For The Stars And Bars

So the protest over the WWII Memorial at the national Mall, closed by the GOP shutdown, turned into the small crowd moving to the White House to protest.  That produced this image: 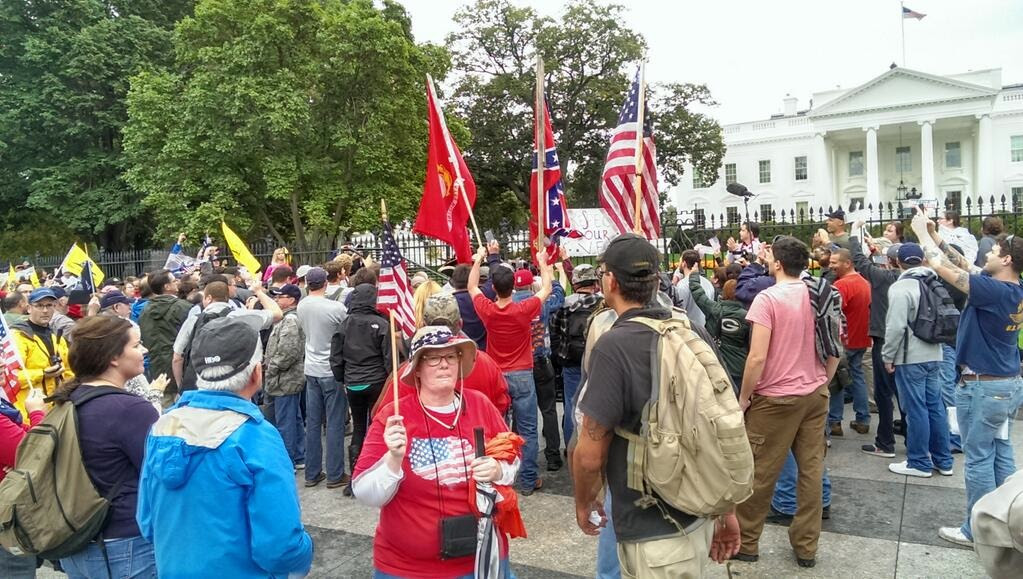 The message a Confederate flag at a White House protest where the first African-American president resides is unmistakable if you grew up even moderately familiar with the civil rights movement.

Right-wing bloggers of course believe the man in the red shirt there must be a "liberal plant".  If that's the case, why is nobody trying to stop this guy?

Think really long and hard about that as we head into this week with a debt default only about 100 hours away or so, and what kind of true, lasting damage such a default would cause to America, our economy, and our standing in the world, damage which the GOP would lay at Obama's feet after dousing the place in gasoline and throwing a lit match over their shoulder.
Posted by Zandar Permalink 8:59:00 PM 1 comment:

China Is Officially Sick Of The GOP

Right now the Chinese government looks like a Swiss watch compared to the time bomb that is our dysfunctional mess, and until we jettison the GOP, the rest of the planet is simply going to go around us.

China's official news agency has called for the creation of a "de-Americanised world", saying the destinies of people should not be left in the hands of a hypocritical nation with a dysfunctional government.

Heaping criticism and caustic ridicule on Washington, the Xinhua news agency called the US a civilian slayer, prisoner torturer and meddler in others' affairs, and said the 'Pax Americana' was a failure on all fronts.

The official news agency of China, which is seen as the pretender to the world's superpower crown, then rubbed in more salt, calling American economic pre-eminence just a seeming dominance.

"As US politicians of both political parties are still shuffling back and forth between the White House and the Capitol Hill without striking a viable deal to bring normality to the body politic they brag about, it is perhaps a good time for the befuddled world to start considering building a de-Americanised world," the editorial said.

It asks why the self-declared protector of the world is sowing mayhem in the financial markets by failing to resolve political differences over key economic policy.

"... the cyclical stagnation in Washington for a viable bipartisan solution over a federal budget and an approval for raising debt ceiling has again left many nations' tremendous dollar assets in jeopardy and the international community highly agonised," the agency said.


After all, it's not just our economy that will be sunk if the GOP suicide bombers detonate a debt default.


According to US Treasury Department data, China is the biggest foreign owner of US Treasuries at $1.28 trillion as of July. Besides, China also holds close to $3.5 trillion of dollar-denominated assets.

A US debt default and consequent credit downgrade would significantly erode the value of China's holdings.

So yes, China stands to lose billions, if not more, on a default situation.  The GOP plans to pull the trigger, and now China is telling us to get our act together pronto.
Posted by Zandar Permalink 5:06:00 PM 2 comments:

On To The Next Hostage Situation

You would think our "moderate" GOP friends would take the hint and stop making hostage demands after the massive beatdown this week, but Very Serious Paul Ryan simply can't help himself, and the fanatical Republican crusade to punish the people who supported this President continues.  This week it's the return of the War on Women!

Since negotiations to avert a national default on the debt have shifted from the House to the Senate, Republicans in the lower chamber are still hoping to use the talks as “leverage” to limit women’s access to contraception.

According to the Washington Post, in a private meeting with House Republicans Rep. Paul Ryan (R-WI) — who earlier this weak floated a compromise that would raise the debt ceiling in exchange for cuts to entitlement programs — railed against emerging Senate proposals and argued that the “House could not accept either a debt-limit bill or a government-funding measure that would delay the next fight until the new year”:

According to two Republicans familiar with the exchange, Ryan argued that the House would need those deadlines as “leverage” for delaying the health-care law’s individual mandate and adding a “conscience clause” — allowing employers and insurers to opt out of birth-control coverage if they find it objectionable on moral or religious grounds — and mentioned tax and entitlement goals Ryan had focused on in a recent op-ed in the Wall Street Journal.

Ryan’s speech appeared only to further rile up the conservative wing of the GOP conference, which has been agitating the shutdown strategy to try to tear apart the health-care law.


That's right folks, it's the return of the "conscience clause" (not to mention delaying the mandate that pays for Obamacare) and the GOP will never, ever, ever stop with the hostage taking until they are broken completely.