And the first crack in, well, the GOP wall, emerge as Colorado GOP Sen. Cory Gardner immediately finds himself in the 2020 hotseat.


Sen. Cory Gardner (R-Colo.), who faces a potentially tough reelection in 2020, says Congress should re-open the federal government, even without a deal on funding President Trump’s border wall.

Gardner is the first Senate Republican to call for ending the partial shutdown even without a deal on Trump’s demand for $5 billion to fund a border wall.

“I think we should pass a continuing resolution to get the government back open. The Senate has done it last Congress, we should do it again today,” he said.

Gardner says the onus will then be on Democrats to explain why they don’t support more money for border security after they voted to spend an additional $46 billion on the border in 2013.

All but five Democrats on the Senate Appropriations Committee last year voted for a homeland security funding bill that allocated $1.6 billion for border fencing. Democratic leaders have since retrenched their offer, proposing $1.3 billion — the same amount Congress appropriated for fiscal 2018 — for border fencing.

“We can pass legislation that has the appropriations number in it while we continue to get more but we should continue to do our jobs and get the government open,” Gardner said, referring to the funding number for border fencing that Democrats have already agreed to.


Between Gardner and Mitt Romney, with Rand Paul's usual antics thrown in, it's important to remember that Republicans can only afford three defections in the 116th Senate.  That means Susan Collins and Lisa Murkowski are going to have some competition, especially Collins, who like Gardener, has a tough re-election fight ahead in 2020.

Just saying, any Republicans who want to stop Donald Trump in the Senate can.  They won't, of course.

But they could.
Posted by Zandar Permalink 9:07:00 PM No comments:

Meet The New Boss, Same As A Couple Of Bosses Ago 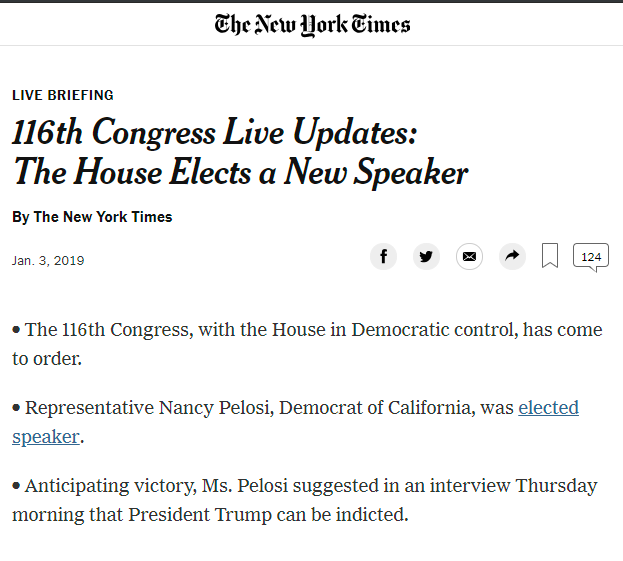 Have a nice day, Donny.
Posted by Zandar Permalink 4:00:00 PM No comments:

A Hat Lands In The Ring, Con't

Another Democrat has signaled getting into the 2020 race, this time it's Washington Gov. Jay Inslee, running on the greenest of green platforms.


Jay Inslee, the governor of Washington state, is running for president with a single-issue focus on climate change.

The governor’s intention to compete for the Democratic nomination was announced in an article published Wednesday in The Atlantic.

Inslee has served as governor of the state since 2012. One of focuses has been environmental concerns in the state, including reducing the use of fossil fuels while pushing alternative energy development and boosting green jobs, according to his bio.

As governor, he also has pushed for investments in education, creating jobs, supporting workers and boosting the state’s transparency, his official bio said.

He is co-chair and co-founder of the U.S. Climate Alliance, a bipartisan group of 17 governors who seek to implement the policy goals of the Paris Agreement.

It’s a strong contrast to President Donald Trump, who supports fossil fuels and has questioned his own administration’s dire report on climate change published in November, saying “As to whether or not it’s man-made and whether or not the effects that you’re talking about are there, I don’t see it," he told The Washington Post.

Trump announced his intention to pull the U.S. out of the Paris Agreement in June 2017.

Inslee said of climate change: “We have two existential threats right now: one is to our natural systems, and one is to our economic systems.”

He previously served in Congress, representing Washington from 1998 until he was elected governor in 2012.


Inslee's point is that unlike Republicans (and more than a few Democrats, looking at you Joe Manchin), he's actually done a lot about climate change.

As he did in Washington State, Inslee would propose a mix of government investments and incentives to spur other investment, restrictions on power plants and emissions, and programs to promote R&D and job growth. An endless number of jobs can be created in the climate arena, Inslee says. It’s the way to make a real dent in income inequality and have the Democratic Party bring tangible solutions to communities in rural America that have been left behind. With his inaction, President Donald Trump—Inslee calls him “the commander in chief of delusion”—is engaged in a “disgusting selling-out of the country,” a “crime” against the aspirational optimism of America.

Inslee is lining up donors and adding them to the political-action committee he launched in December. An official presidential exploratory committee is next. Aides note that he’s attracted new supporters and fans after serving as the Democratic Governors Association chair last year; with Inslee at the helm, Democrats in November picked up seven governorships. He’s put together an email list of 200,000 climate advocates, which could become a beachhead of support around the country. Friends have offered to move to Iowa for him.

His campaign, such as it is, seems a lot more seat-of-the-pants than the machines Senators Elizabeth Warren, Cory Booker, and Kamala Harris have slowly assembled. For now, he seems to be counting on being able to stand out on his record—and preparing for future battles with Trump by testing out zingers like “I wish nothing but the best for Donald Trump, including having the top bunk.”

Inslee has been in politics for 30 years. He started off in the Washington State legislature and served for more than a decade in Congress. He was elected governor in 2012 and has, without much national notice, pursued arguably the most progressive and greenest agenda in the country, with fields of solar panels, fleets of electric buses, and massive job growth to show for it. And years before anyone was tweeting about the “Green New Deal,” Inslee wrote a climate-change book while he was in Congress: Apollo’s Fire, a 2007 blueprint for how much economic and entrepreneurial opportunity there is in saving the planet.


Here's my issue with Inslee however: the Dems can't afford a single-issue candidate, because the America that elected Trump is fundamentally broken.  There's a lot to fix, and climate change and the Green New Deal is only a small part of a much larger social, racial, economic, and educational problem in America today.

What I'm worried about is Inslee is burying the issue of race in America under green instead of class, and it's Bernie Sanders all over again, a "kinder, gentler" progressivism that ignores all those "feel-bad" issues of bigotry and prejudice in favor of wining over suburban white voters.

That cannot work in 2020, and from what I'm seeing of Inslee, while he'll make a great Interior Secretary under a Democratic President, that's the limit of his aspirations.
Posted by Zandar Permalink 10:00:00 AM No comments: