Bernie Goes After The Don

At face value, this is a solid move by the Sanders camp.

Sen. Bernie Sanders, I-Vermont, faulted Republican presidential candidate Donald Trump for converting voters' legitimate concerns into hatred and said he can win over some of those voters with his message about improving the economy.

"What Trump has done with some success is taken that anger, taken those fears which are legitimate and converted them into anger against Mexicans, anger against Muslims, and in my view that is not the way we're going to address the major problems facing our country," he said.

He suggested there was a certain irony about the fact that Trump does not want to raise the minimum wage, and is looking at ways to give millions in tax breaks to the wealthiest people in the country.

"I think for his working class and middle class supporters, I think we can make the case that if we really want to address the issues that people are concerned about...we need policies that bring us together that take on the greed of Wall Street, the greed of corporate America, and create a middle class that works for all of us rather than an economy that works just for a few," Sanders said.


The problem with taking this at face value is that Trump supporters aren't the least interested in working to solve the problems of the country, they are looking out for themselves and blaming Muslims, Mexicans, black people, anyone who isn't white, male, and Christian is a lot easier and in the short run a lot more effective.

The question is whether or not Bernie Sanders believes his own reasoning.

If he does, he's far too naive to be in politics.  Considering he's been in politics for four decades, I'm discounting that right off the bat.

That leaves why he's feeding people a line about Trump supporters when the sole motivation for Trump is outright racism.  Trump. Supporters. Are. Racist. Assholes.  Period.  Sanders doesn't believe the line.

So why does he think other Democrats, or even Trump supporters, will?  There's one reason, and that it's a nice excuse to provide cover for bigotry.

Bottom line, why does Bernie want Trump supporters, and why does he think he can win them?

My suspicions are pretty cynical if not ugly.
Posted by Zandar Permalink 8:00:00 PM No comments: 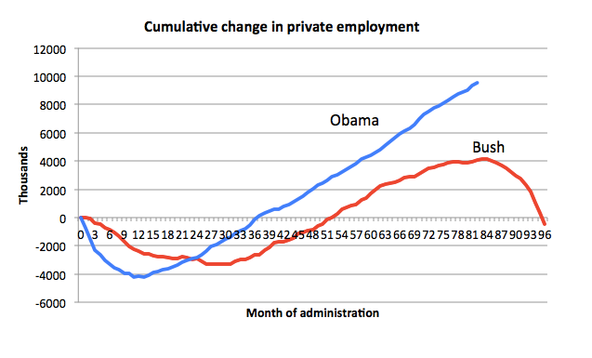 Is it any wonder why the right is trying to scream THE CHARTS ARE LYING OBAMA FAILED US as loudly as possible?
Posted by Zandar Permalink 10:00:00 AM No comments: