I swore that Maine Independent Sen. Angus King was going to ditch the Dems for the GOP back in April after the midterms should the Republicans win the Senate.  Hell, Angus King said as much.

Sen. Angus King (I-Maine), who caucuses with the Democrats, will decide after the midterm elections whether to switch sides and join the Republicans.

He is leaving open the possibility of aligning himself with the GOP if control of the upper chamber changes hands.“I’ll make my decision at the time based on what I think is best for Maine,” King told The Hill Wednesday after voting with Republicans to block the Paycheck Fairness Act, a measure at the center for the 2014 Democratic campaign agenda.


But apparently not only was I wrong, so was Angus King.

Angus King: "I have decided to remain with the Democratic caucus."
— Mike Memoli (@mikememoli) November 5, 2014


.@SenAngusKing: "I think it's In Maine's interests to have a senator in each camp." Sen. Collins will be in GOP majority
— Mike Memoli (@mikememoli) November 5, 2014


So for now, Flipper hasn't jumped.

Whether or not he'll vote with the Dems, well.  That's a whole 'nother thing.

In One Graph, As They Say 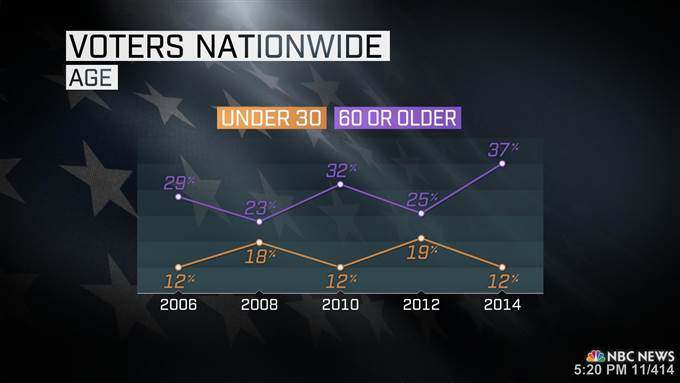 Perhaps now would be a good time to ask why politicians aren't interested in fixing student loans, the environment,civil liberties, or any other issue that matters to Millennials*.

(* And by Millennials, I mean "White voters under 30 who stayed the hell home yesterday."  Congratulations on your ongoing political irrelevance.)
Posted by Zandar Permalink 4:00:00 PM No comments:

The Ugly Morning After

A brutal, brutal night for the Democrats last night.  The polls badly underestimated what was effectively a GOP wave.


While Brown didn't get swept up in the wave, virtually every other close race is being won by Republicans. Consider:

Final tally:  GOP needed 6 seats to retake the Senate and got 8, plus likely two more when Alaska finally comes in and Louisiana's runoff is settled, for what will probably be a ten-seat pickup.

That's your ballgame.  Turnout nationally was lower than 2010.

The demographic mix of young, minority and women voters that twice helped elect Obama to the White House never was going to be as robust in a midterm election Yet the fall-off from the level of support the president enjoyed just two years ago was a major factor in the Democratic loss of the Senate.

Even when compared to the last midterm election in 2010, the American electorate Tuesday was older, exit polls show.

Those 65 and older represented a quarter of the national electorate, up from 21 percent four years earlier. Democrats sought to turn out younger voters, but that didn't happen nationally. The share of those 29 and younger was identical to 2010. The proportion of the electorate represented by Hispanics–8 percent–was identical to 2010. Turnout among black voters increased by a percentage point to 12 percent this year, and Asian voters increased by a single point as well, to 3 percent.


Republicans did even better than they did four years ago.  We stayed home like chumps.  That's your answer.