Breitbart's clowns are screwing up everything they can find, as usual, and this time their stated mission of lying to America about the Obama administration is no different.

According to a November 8 Breitbart.com article by Warner Todd Huston, "few are talking about" the fact nominee Lynch "was part of Bill Clinton's Whitewater probe defense team in 1992." Huston pointed to a March 1992 New York Times article that "reported that Lynch was one of the Clintons' Whitewater defense attorneys as well as a 'campaign aide.'" And in a November 9 article Huston's colleague, Breitbart.com Senior Editor-at Large Joel Pollak wrote, "The connection to Whitewater ought to provide additional fodder for Republicans during Lynch's confirmation hearings".


Only one problem.  It's the wrong Loretta Lynch.

The Loretta Lynch referred to in the New York Times article is a California based attorney who has worked on several prominent political campaigns, not Attorney General nominee Loretta Lynch. Obama's nominee is shown on the right, while the Loretta Lynch Breitbart refers to is on the left: 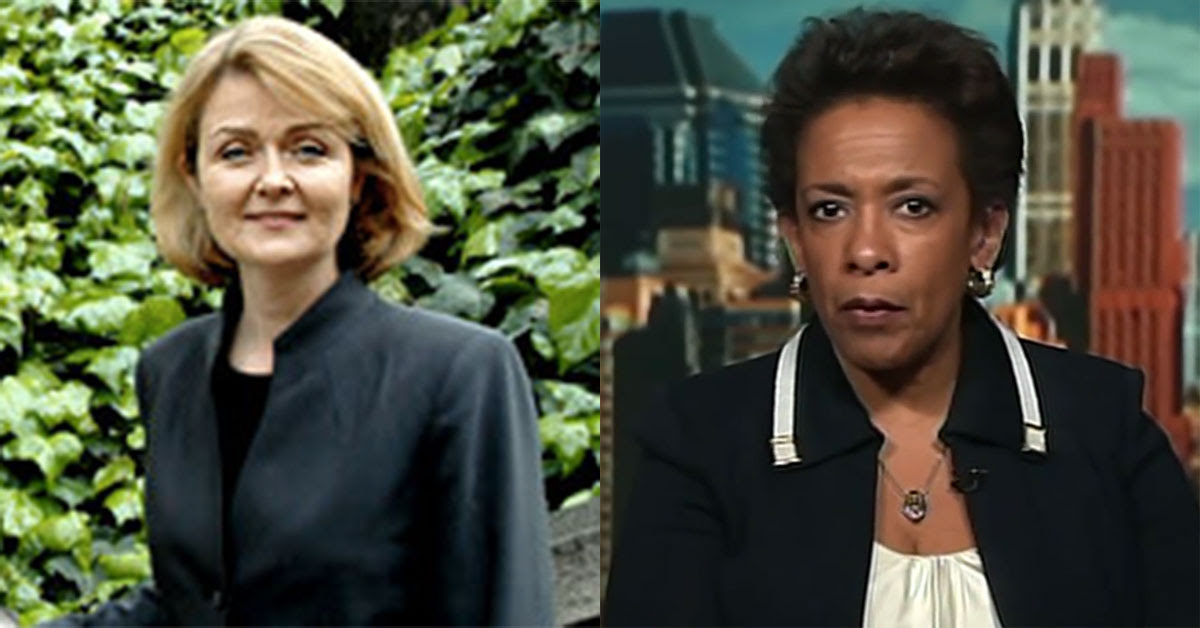 These idiots can't even get the correct race of the actual person right, which is everything you ever need to know about Breitbart.com.  Of course that doesn't matter to the right, they'll find some other way to block Lynch.

The same day that President Obama nominated Loretta Lynch to be the next attorney general, Sen. Ted Cruz (R-TX) and Sen. Mike Lee (R-UT) signaled that it won't be an easy process.

"President Obama’s Attorney General nominee deserves fair and full consideration of the United States Senate, which is precisely why she should not be confirmed in the lame duck session of Congress by senators who just lost their seats and are no longer accountable to the voters," the senators said in a Saturday statement.


So yes, I expect the lame duck session will be about as productive as the rest of this dismal GOP-ruined Congress.  The threat is simple: if President Obama dares take executive action on immigration, Lynch is done.

Maybe if Obama was nicer to the GOP and resigned from office, he'd get Lynch through.

Just a thought.
Posted by Zandar Permalink 8:46:00 PM No comments:

The Future Ain't What It Used To Be

Time for part two of our sci-fi weekend double feature review, and if Big Hero 6 represented a bright future here on Earth, then its opposite is Interstellar, a future for humanity so awful that we need to leave the planet behind.

The movie opens in a Midwestern farm state, sometime in the 21st century.  There are no more wars, it's true, but that's because Earth's crops are dying off one by one to a disease called Blight, and there's not enough food to feed the planet.  Huge dust storms ravage the skies, driving people indoors to seeks shelter.  Carrying masks and goggles on you at all time is just what people do.

And science and technology are the first casualties of this new order.  Cooper (Matthew McConaghey) is a washed up NASA test pilot without a NASA program, as the government apparently mothballed it a decade earlier.  He's turned farmer along with his wife's dad Donald (John Lithgow), who reminisces about the good old days of, well, today (my theory is that Donald is a grown Millennial, putting the story about 2050 or so) and his kids, son Tom (Timothée Chalamet) and daughter Murph (Mackenzie Foy).  Cooper is pissed to find out Murph has gotten into fistfights at school over bringing her dad's science textbook in and explaining to her classmates and incredulous teacher that the moon landings were real and not faked.

But then things get weird.  A mysterious force is haunting Murph's bedroom, and somehow communicating with her (think Contact or Close Encounters) and when Cooper finally pays attention, he realizes he's getting coordinates to where NASA has gone, deep underground, off the radar, off the grid, and off the budget.  There he meets his old mentor Professor Brand (Michael Caine) and his equally brilliant daughter (Anne Hathaway) who tells him that somehow, a stable wormhole to another galaxy has been located off Saturn, and NASA has been shooting scientists into it, looking for a new home for humanity.  Somebody's put that wormhole there for a reason, and it's up to Cooper and the young Dr. Brand to find out why.

One final mission is being planned to find that new home, and that mission is where the movie really picks up and turns into a grand space exploration adventure, as Brand and Cooper have to leave everyone they love and know behind for the good of all mankind.

I loved this movie, frankly.  It's the first movie I've seen with Anne Hathaway in it in ages where I didn't immediately loathe her Manic Pixie Dream Girl act, maybe because she's playing a scientist and explorer instead of a piece of arm candy, and the fact that the real relationship here is between Cooper and his daughter Murph.

Besides, it's a breathtakingly beautiful film, with more than a few nods to Gravity, and TARS the robot is awesome.

This week's Sunday Long Read is Joe Sonka's postmortem on the Grimes campaign, and how she lost by 16 points in the space of only a couple of weeks.

But at the very least, Grimes had an opportunity to make Tuesday’s election competitive, and the overarching reason she didn’t give herself that chance was the hermetically sealed bubble in which Grimes’ intellect and personality was locked by her campaign. Her campaign repeatedly touted how “disciplined” she was, never going off script and saying something that could end up in an attack ad. Some extent of discipline is needed for any campaign, but they took this to an extreme that ended up defining her as a candidate and left many wondering who she was, what she believed, and whether she was up for the job. And any young, relatively unknown candidate presenting herself as a mostly blank slate is especially vulnerable.


Do read the whole thing.   If you want to know exactly how Kentucky Democrats blew the best chance they ever had to unseat Mitch the Turtle, well, this is the best article I've read of its epitaph.  Grimes's refusal to say if she voted for Obama or not pretty much turned a six-point loss into a sixteen-point one.

And the best part is we get to go through all of this next year here as Gov. Dinosaur Steve's job is up for grabs in 2015 between Dem AG Jack Conway and GOP Ag Secretary James Comer.
Posted by Zandar Permalink 11:03:00 AM 3 comments: